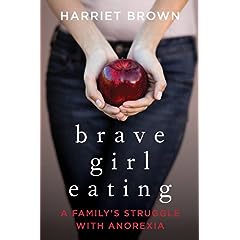 Between three and six percent of all teens struggle with some type of eating disorder, be it bulimia, binge eating, or anorexia. Because these illnesses involve eating, they seem to take a blow at family traditions, celebrations, and expressions of togetherness. Thus, parents, siblings, and even relatives all suffer, as Harriet Brown so adroitly shows us in her memoir Brave Girl Eating: A Family’s Struggle with Anorexia, a heartbreaking story about a mother who’s ready to march to the end of the earth to save her daughter from anorexia.

From all outward appearances, Kitty looked like the girl who had it all: a straight-A student; an accomplished gymnast; and a happy, well-liked teen who loved reading, horses, and even cooking.  By sixth grade, however, she began counting calories and maintaining what appeared to be a healthy diet. However, Kitty’s dieting grew to an out-of-control obsession. Crisis hit at age 14 when Kitty woke up in the night and told her mother that her heart “felt funny.”  In the hospital’s intensive care unit, Kitty was discovered to be underweight by 20 pounds and with a heart rate of only 42 beats a minute (normal is 60 to 80). She could have died from a heart attack.

Brown’s crusade to save her daughter taught her many things, including some facts that terrify her: “most people with anorexia bounce in and out of hospitals, recovering and relapsing. That anorexia is the deadliest psychiatric illness; close to 20 percent of anorexics die, about half from starvation and the other half from suicide. Nearly one-fifth of all anorexics try suicide; many succeed.”  She also learns that recovery time is painfully slow — on average five to seven years.

In fact, Kitty was in and out of hospitals and did not recover quickly. Brown looked for help wherever she could, through a support group, books, and different kinds of therapy. As expenses for hospitalizations and treatments escalated, Brown fought with the insurance company over costs. When Kitty was home, Brown concocted high-calorie drinks and snacks and spoon-fed Kitty just to make sure she was eating.

No step of this was easy. As Brown describes it, Kitty was often Not Kitty–someone who appeared almost demon-possessed. “I know my daughter’s face far better than I know my own. I’ve stared at it, examined it, admired it, loved it…,” writes Brown. “But I’ve never seen this face before. Her eyes have gone blank; her mouth turns downward in almost a caricature of a pout. Her tongue pokes out, and…I realize with horror that it’s flicking like a snake’s forked tongue.”

It’s an image that makes any parent cringe, and yet any parent who has dealt with a teen’s mental illness can immediately relate.  Without a doubt, Brown’s sincerity is one of this book’s strengths. Brown writes honestly as a parent who is admittedly flawed and yet who remains vigilant in her quest. She tells readers that she ignored the signs of Kitty’s anorexia in its early stages. She admits to being exasperated and tired in feeding Kitty/Not Kitty. All the way, Brown relays how she navigated the system, what she learned, and how she kept her family together.

Even though this is a memoir, Brown, a journalist who writes for O, Redbook, and Psychology Today, skillfully weaves research into her narrative. She brings in lesser-known facts about anorexia, some of which explain why this disease seems to strike certain individuals, why it’s so hard for Kitty to gain weight, and even why this disease can actually appear to be a “demon.”

Certainly this is an engaging book–well-written and driven by a compassionate voice. Even so, I longed for Brown to push a little harder with her narrative scenes. For instance, I would liked for Brown to bring me to her dinner table so I could actually hear Not Kitty and see how family members reacted to her. Rather, Brown often glossed over the drama and summarized what happens. Because of this, Brave Girl , at least in my mind, is not on par with some of the top tier mental health memoirs, such as Lucky, The Unquiet Mind, and Girl, Interrupted.

Still, this book has a great deal to offer.  Any parent who has a child with an eating disorder will appreciate its helpful advice, interesting facts, and attempts at comfort. In the midst of crisis, it’s nice to know others have been this way before.