Reviews Home » Parenting » Breath in the Dark: A Childhood Lost 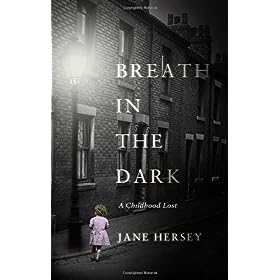 When I was 6 years old, my favorite pastime was playing with dolls or playing dress-up. I can remember spending hours in my “princess” dress, dancing around the living room while my mother stood by with the camera, encouraging me. She would fix my hair, sing to me, and let me sit beside her while she played piano.

Sadly, Jane Hersey’s childhood was nothing like my own. Her biography, Breath in the Dark: A Childhood Lost, tells the story of her youth in 1960s Manchester. Instead of playing with dolls or learning to read, Hersey spent much of her childhood caring for her ill mother. Not only was her mother extremely diabetic, she constantly battled clinical depression and eating disorders, which added to the danger of her diabetes.

Hersey begins her story at the age of 6 and describes the hunger, loneliness, and constant fear that she felt with no adult to rely on. She relates her story in the haunting, devastating voice of a traumatized child. Some of her tales are so gripping that I wanted to reach out to the young Hersey and hug her.

There were times when there was no money, Hersey tells us. In order to keep the fire in the apartment going, she would pull linoleum tiles off the floor and burn them. Terrified of monsters or bad people taking her or killing her mother, she would continuously say “Shama Yisroel” to ward off evil (a common Jewish prayer). Weekly, she would go pick up the National Assistance money. Hersey would get groceries and beg the local doctor to write prescriptions for “breathing tablets” and “purple hearts.” (Based on the descriptions of the effects these pills had on her mother, it is likely that they were some form of anti-anxiety and anti-depression medications.)

As she entered adolescence, Hersey’s well-being did not improve. She never attended school regularly so her education level was low in comparison to her classmates’. Her mother died when she was a teenager and Hersey was sent to live with an aunt. To say the aunt was bitter and resentful would be almost an understatement. Hersey was desperate for love, attention, and understanding. Unfortunately, none of the adults who crossed her path were able to show her these. Her father abused her and used her as a prostitute. Others in the community, including the social worker assigned to her, looked down on her with either pity or disgust. Her aunt used her as a slave and whipping post, verbally and physically. Hersey describes one chilling scene:

“‘Don’t you ever touch my Eric again,’ She grabbed my hair and I felt my jaw crack as she pulled my hair back. I closed my eyes. She pulled me out of bed. ‘Don’t ever do that again, whore.’ She screamed in my ear.

Hersey was only about 15 when this took place. Sadly, this was not the first or the last time her aunt lashed out her. What had instigated this lashing? Prior to this scene, while Doris was out, Hersey’s cousin Eric had attempted to molest her. She defended herself and when she pushed him off of her, a button popped off of his shirt. Rather than being able to tell a trusted adult, Hersey was accused of attacking her attacker.

It seems as though every time Hersey got a chance, someone or something stripped it away from her. She was fired from every position she had, typically because she could not keep up with the work or did not understand what was expected of her. It is interesting to read about her constant confusion by what takes place around her. She struggled to understand why people did not love her and why they did things differently from her. One common struggle was with men. Because of the sexual abuse she suffered at the hands of her father, she was fearful of any man who came near her, terrified of smelling their “socks and body smells” — two scents that left deep impressions on her from her father’s attacks. She often wondered why other females looked happy to be near their fathers and their smells.

It is heartbreaking to read of Hersey’s tiny glimmers of hope and trust only to see them be stripped away quickly. Unfortunately, that is where the story ends. Hersey provides no resolution to her tragic tale; the book finishes with her inquiry into a chambermaid position at a hotel. The lack of resolution leaves many questions unanswered. Did she ever overcome the obvious effects of her traumatic childhood? If so, how? Did she receive psychiatric treatment or did she have some type of life-altering moment that miraculously undid all of the damage? What happened to her brothers? Did she ever see either of them again and did they become successful in life? Is she still in contact with Auntie Doris?

There are many more questions that could be asked about the rest of her life, considering that she is still a young adult when the story ends. Apparently, there must have been some positive changes that took place for her to be able to write and publish her tragic tale.

All in all, Hersey’s story can be summed up in a few words: haunting, disturbing, sad, and important. Her book gives a glimpse into the world of a child carer, one that I believe few have gotten to know this intimately. The tremendous impact that this role had on her development and psyche is overwhelming at times and shows just how much outreach is needed for children in similar situations. My hope is that, in writing her story, Jane Hersey was able to find some peace with the childhood she knew.