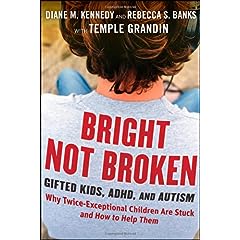 Diane M. Kennedy and Rebecca S. Banks, the authors of Bright Not Broken, and the contributor, Temple Grandin, all have a combination of personal and professional experience with learning and developmental disabilities.

Kennedy and Banks are mothers, as well as professionals who previously collaborated on the book The ADHD-Autism Connection, and each has multiple children who are twice exceptional.  “Twice exceptional” is a term that they address in the beginning of their book. They write that it is “a relatively recent term that refers to children who have dual ‘exceptionalities’—that is, exceptional gifts (creative, academic, intellectual, or physical abilities) along with a learning or developmental disability.”

Temple Grandin is perhaps one of the world’s most successful people with autism. She has her PhD in animal science and is both a professor and an author.

As they did with the term “twice exceptional,” the authors begin with a lot of contextual information to help explain the terms, intentions, and needs for writing this book. They go on to implore, as does Temple Grandin in the preface, that changes be made.  These twice exceptional (or 2e, as Kennedy and Banks come to say) children are falling through the cracks because their disabilities are being granted power over their abilities.

The book is organized into three sections. All three are equally important in helping a child with 2e: ‘Who They Are,’ ‘Why They’re Stuck,’ and finally, ‘How to Help Them.’ Since Kennedy and Banks are both mothers, they take care to explain that this is a book meant to help parents in a variety of ways.  This book is not just an offering of support and resources, but it also breaks down the issues of why these children are “stuck” in the first place.

Temple Grandin, as you may have already known from the HBO movie based on her life, has had great success cultivating her abilities despite having autism.  Kennedy and Banks mention that she is a perfect example of being “bright and not broken,” a goal they have for all children, 2e or not.  They believe that the success of each child will greatly help the world because these children can then feel good about what they can contribute, instead of being stuck on what they can’t do.Temple Grandin brings attention to how some children with autism introduce themselves, saying that they tell her their disorder first—showing that they define themselves by their limitations.

The authors give some context to these disorders by explaining that 2e kids today are tomorrow’s “Albert Einstein, John Couch Adams, Thomas Edison, Sir Isaac Newton,” and the list continues.  Many of these classic figures had symptoms that today may have been diagnosed as ADHD or autism. For example, Einstein didn’t speak until he was 3 and Gregor Mendel, who gave us the foundation for modern genetics, couldn’t pass the exam to qualify to teach high school.  Had these men been labeled with a disability, they may never have achieved their greatness, because they may have also defined themselves by limitations.

Kennedy and Banks also break down ways to help teachers and parents identify their child’s gifts.  They explain these disorders in a refocused way by giving supportive and caring definitions that require a deep understanding.  These new definitions were created by combining a parent’s care and understanding and the experienced intelligence of a professional in the field.

As mentioned, all the sections of this book are important for understanding the entire issue at hand, but the section on ‘Why They’re Stuck’ is extremely informative and explains exactly how and why the current system is not doing these children justice.  Particularly, they explain how important it is for parents to know the different debates in standardized testing.  This way, they can avoid falling into the trap of defining their child by these flawed systems of measurement.  I found this section to be the most intriguing because after you read it, it will be nearly impossible for you not to want to change the system.  Kennedy and Banks have certainly done their research, but they also show how to apply it in a practical way, making this book a great help to parents and professionals alike.

Finally, they talk about diagnosing and educating the whole child instead of just labeling one aspect of them.  This new type of diagnosis and education factors in all their needs and gifts, showing how to adapt it to individual children because, after all, we all have individual needs.  Most importantly, Kennedy and Banks keep reminding their readers that 2e children have so much so offer the world and they want to make that happen.  Also, if you want to do more exploration, they end with a long list of helpful additional resources.

Personally, they have convinced me that in an attempt to help people with disabilities, we have hurt them by labeling them.  This label can hurt them because if focuses all the attention on what they cannot do, instead of also exploring what they can do.  This book is truly inspiring and it shows that by simply changing our perception of these children, and then the testing and education that stems from that perception, we can help them become successful, contributing adults.  Perhaps they could even make history.