Reviews Home » Brooklyn Zoo: The Education of a Psychotherapist 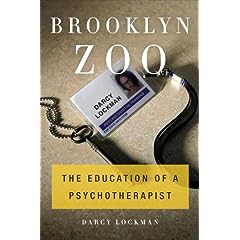 Darcy Lockman left her journalism career to become a psychotherapist. Clearly a gifted writer, the decision could not have been easy. But she made it and stuck with it. After earning her doctorate, she needed to intern for a year at a New York hospital, opting for Brooklyn’s Kings County Hospital. As one can tell from her book’s title, Lockman did not know what she was in for.

Brooklyn Zoo, to be released in July 2012, is expertly written: The prose flows, the pacing is even, and the structure is well crafted. As well, the content—the story—is utterly fascinating.

The book’s subtitle says it all. We are not witness to Lockman’s learning about psychology in a classroom or what have you; we are instead witness to her real education—what she learns on the job.

The first of four rotations Lockman must complete is in forensic psychology. She writes:

As it turned out, forensic psychology encompassed all sorts of things, most of them having to do with evaluation rather than treatment. Who knew? The forensic psychologists at Kings County spent the bulk of their time doing fitness-to-stand-trial evaluations, working not out of the hospital but in a small office on the thirteenth floor of the criminal courthouse in downtown Brooklyn. They called it the court clinic.

It was in this arena that Lockman’s education started. Having to listen to psychologically ill defendants describe their alleged crimes, states of mind, childhoods and current circumstances was by no means easy work, even if Lockman did have two doctors and a lawyer present to lead the proceedings. Reflecting upon a particularly ill defendant, Lockman writes:

Illogical thinking is one artifact of psychosis, and the defendants we saw often had interesting ideas about how they’d become ill. Mr. Ruiz…attributed his confusion to a watermelon seed. ‘I swallowed it, and I felt it go up into my head,’ he told us. ‘It’s causing trouble. I feel it there now, and I can no longer think very well. When I was young, my mind was okay, but not now.’ His crime was trespassing, though by his account his trespass was only into his former home… He would not agree to either take a plea or go to trial, and he kept insisting, ‘I can’t pay these people,’ meaning his lawyer, though it was repeatedly explained to him that someone else would cover the expense. Mr. Ruiz was not fit to stand trial.

Lockman had another encounter of note shortly after, when she met a defendant named Grant Carson. When he continually referred to voices in his head, Lockman reasoned he had Dissociative Identity Disorder:

DID always made sense to me; it just seemed like dissociation reaching its inevitable potential. But I’d never before been seated at a metal table across from someone who had it, and I found it perversely exciting.

When she told her superiors of her hypothesis, one was annoyed, knowing they would have to administer a host of tests that would determine what they already knew: this man was unfit to stand trial. Lockman, however, was excited. After two days of testing, the doctors, as well as Lockman, handed in their recommendations. “I had never hoped so vehemently that my recommendations would be implemented,” Lockman writes. We can see her enthusiasm, her love for what she’s doing. Yet mere sentences later, we also see her naiveté disintegrating, her cynicism rising:

…given that Grant still stood accused of holding up honorable citizens at gunpoint on the subway, and that the system had limited resources when it came to mental health care, I doubted he would ever get the therapy he’d need to have any relief. Grant Carson was probably the first person I’d ever met who made me question whether significant relief was always even a possibility. Maybe a person could only take so much. Maybe there was a point of psychological no return.

Not only was Lockman losing her faith in the system so early on, but she was also losing her faith, on a grander scale, in man. For if “significant relief” was for many an oasis, then how could someone like Lockman actually help? How do you lead someone to something that is not there? Moreover, how do you work with a system that, oftentimes, cannot work with you?

Brooklyn Zoo is by no means a fun read. It is, however, an intelligently written, sobering look at what it takes to be a psychotherapist. It is not dense, but it is not light, either. It’s the kind of book you don’t want to rush through; you want to dwell on each chapter, and meditate on Lockman’s experiences to get a fuller sense of what she saw. With a unique voice and a knack for painting verbal portraits, Lockman has delivered a rare gem: a book you may not want to read, but one you should.