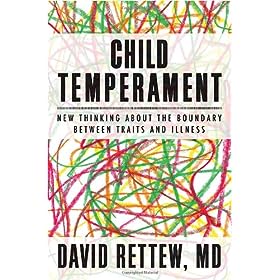 Child Temperament: New Thinking About the Boundary Between Traits & Illness

Are you the firstborn child of your family? Did you turn out to be the most responsible, the parent-pleaser, or the motivated one? According to Alfred Adler and researchers of personality and temperament, firstborns tend to “outperform” their other siblings. In fact, about 21 of the 23 astronauts and the majority of U.S. presidents have been firstborn children. But: If you think about Venus and Serena Williams and their international success in tennis, you will see that birth order is nothing more than pseudoscience. Serena Williams, the younger sister to Venus, is just as successful as her older sister. Some might even say she’s more so.

The lack of knowledge among Adler and other researchers on this subject led child-and-adolescent psychiatrist and University of Vermont professor David Rettew to write Child Temperament: New Thinking About the Boundary Between Traits and Illness.

Understanding child temperament and personality has been one of the most difficult things for human-development researchers. It is hard to determine what temperament is, how to define it, and how to study it. And so, over many centuries, doctors, philosophers, and researchers have come up with explanations.

The ancient Greek physician Galen believed that the key was to look at mixtures of what are known as the four humors: yellow bile, black bile, phlegm, and blood. (The word temperament itself is derived from the Latin word temperature, meaning “to mix.”) Galen’s ideas transformed over time: He further believed that these humors led to four main personality types: choleric (ambitious, labile), melancholic (thoughtful, worried), phlegmatic (relaxed, content), and sanguine (social, pleasure seeking).

This remained a prevalent theory for many centuries. In the 17th century, philosophers such as John Locke came on the scene and began to define temperament and personality in extremely different ways. Locke believed that a child is born into the world as a “tabula rasa,” a blank slate on which life experience is later written. Later, in the 19th and 20th centuries, behaviorists such as John B. Watson and Ivan Pavlov began to share their ideas. Watson believed that environment alone controlled and shaped behavior. In a 1930 work, he stated:

“Give me a dozen healthy infants, well-formed, and my own specified world to bring them up in and I’ll guarantee to take any one at random and train him to become any type of specialist I might select — doctor, lawyer, artist, merchant-chief, and, yes, even beggarman and thief, regardless of his talents, penchants, tendencies, abilities, vocations, and race of his ancestors.”

Whereas Watson was convinced that environment alone could shape behavior, Pavlov believed that personality could be developed by learning and associations alone.

Despite all of these ideas and attempts at understanding human behavior, we, of course, still don’t quite get it today. Current investigations of personality and temperament are dependent upon animal studies and questionnaires. Although we have become a bit more sophisticated in “studying” and analyzing temperament, we still lack a great deal of information.

And this is exactly the author’s point.

Rettew posits that a variety of things can contribute to temperament, such as certain medications, neurobiology (brain and genetics), and environmental influences. In order to be an educated parent or healthcare provider, he writes, we must understand that temperament is often influenced by environment, genes/genetics, and gender.

A “temperament-informed view of child behavior problems,” the author writes, will help clinicians, parents, and teachers correctly identify and treat mental or behavioral issues. Being well educated on that matter should also reduce stigma and misdiagnosis.

Rettew’s book is a great starting point for parents in search of a basic primer on the subject. In combination with other articles and resources, the book will not only help you learn what to do, but help you prepare for your child’s next psychiatric assessment, clinical review, or IEP meeting. And it will make you realize just how much we still have to learn.

Child Temperament: New Thinking About The Boundary Between Traits and Illness

Child Temperament: New Thinking About the Boundary Between Traits & Illness