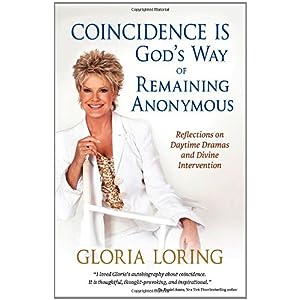 Little did Gloria Loring know when she found a business card that was placed anonymously on her dressing room chair that it would help her for the rest of her life.

In her new book, Coincidence is God’s Way of Remaining Anonymous, this singer, actress, and author relates an autobiographical story of how things in her life have fallen into place exactly where and when they were supposed to. It was that little card, which said “expect a miracle,” and which is now framed and hanging in her office, that would become the foundation of her being actively aware of signs throughout her life. While her role as the character Liz Chandler in the long-running daytime soap opera Days of Our Lives certainly offered what would become key coincidental opportunities, Loring focuses more on the role of divine intervention. As she writes, “I didn’t know about the partnership of self-effort and grace.”

It was by the grace of coincidence that she was able to find release from inconsistencies in the faith of her youth. Growing up, she struggled with religious teachings that, in her words, implied that “if you didn’t believe as ‘we’ believed, you weren’t ‘saved,’ which was shorthand for ‘you’re going to hell.’ ” Through the knowledge gained by researching other religions, she came to the conclusion that she “had to have a word other than God to describe the goodness and intelligence that exists in the universe.” Instead of a that commonly-used word, the idea of a “connecting principle” rang true for her.

Loring likens her early years to being a pass receiver in the football game of life. Waiting for someone else to make life better caused her to realize “I wasn’t a victim, I was a volunteer.” She refers to the how-to of changing one’s life as the “Four I’s” – impulse, intention, inventory, and investment. “By acting as if, we exhibit trust in our connection to a solution,” she writes, “even though we may not feel we truly have it yet.”

An introduction to meditation was the vehicle that carried Loring from inner turmoil to peace. In the book, she cites a study conducted in a village during the Lebanese civil war in which a physician taught his patients to meditate. Results showed evidence of a drop in crime and violence in the area when just 1% of the people meditated daily. Another study collaboratively conducted in Washington, DC, by the FBI and social scientists showed a 25% drop in the rate of crime over a period of three months. Again, this occurred when only 1% of the population in the study was meditating.

Loring believes that if meditation can do this for communities, it can certainly do it for individuals. She not only practices meditation, but also became a certified yoga instructor and taught hatha yoga for seven years. Yoga, she writes, “attended to my need to honor all faith traditions.”

Each chapter of her book begins with a quote that sets the stage for what is to come, and each seems part of a television script. As the story develops, another quote directs the reader’s attention to the next scene. Then, each chapter ends with lyrics to a song that the author has written. The table of contents is appropriately called “Table of Songs.” Loring’s lyrics effortlessly stand alone without musical accompaniment.

In Loring’s book, we are invited to listen intently to the voice of intuition that is “the God within us,” and to become aware that coincidence brings with it the potential of possibility. Loring’s writing style is rather simple, as opposed to that of a more accomplished writer, and that aspect of the book is a bit “ho-hum.”

On the flip side, it’s nice that Loring doesn’t talk down to the reader. Hers is more of a conversational style, and as such it’s very relatable. Overall, she does a great job of illustrating how one simple occurrence in a life can lead to life-changing choices later on — but only if we take that opportunity to heart.

How to Stop Being So Controlling

How Feeling Not Good Enough Makes You Crave Validation

Long Term Results of Parental Alienation to the Alienated Child