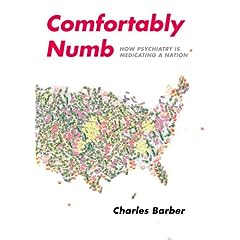 Charles Barber’s Comfortably Numb is an important book and deserves to get the same kind of attention Listening to Prozac got in 1993. What Barber has done is no less than introduce America to psychotherapy — or would that be re-introduce? –and show it works as powerfully in treating depression as do anti-depressants. The book begins with several chapters detailing where we have been in this country with treating depression over the last 20 years and how anti-depressants have literally crept into so many corners of American life, often in places where they were not needed or where their use was essentially created by pharmaceutical companies. Barber writes from the perspective of a frustrated caregiver–he’s worked with the homeless and low-income mentally ill for years and is now an instructor in the psychiatry department at Yale — but his account of America’s embrace of psychopharmacology isn’t as bitter as you might expect (or maybe it’s not as bitter as mine would be) and is all pretty much setting the table for the book’s second half.

The book is at its most engaging when it takes on cognitive behavioral therapy (CBT), as well as Motivational Interviewing and the Stages of Change psychosocial model. The latter two may not be familiar to most, but at this point CBT is becoming more widely known in America and is a well-researched effective treatment for depression (very severe depression would be an exception) that is sadly not used much in America. I’m sure most people can guess at the reasons why. What amuses me is that some reviewers have written off Barber’s work on grounds that the psychotherapies he discusses in the book are unresearched and wooly-minded. I think these writers likely need to check their facts a bit more carefully before penning their reviews.

In the case of Peter Kramer, author of Listening to Prozac, who chopped up Barber’s work on slate.com a few weeks ago, I think he was just arrogantly responding to a book that had taken a few shots — well-aimed ones — at his own book. Why slate.com let him review the book is beyond me (he sure didn’t mention in the review that Barber had knifed him up). Why Judith Warner wrote about Barber’s book without having read past the introduction is an even scarier concept. Sorry, folks, but the evidence on CBT as a treatment for depression is quite well hammered out at this point. It’s likely a better first line treatment for depression (as opposed to what Barber calls Depression, as in severe clinical depression, where meds as a frontline defense are better suited) than are anti-depressants, but it does require the kind of work and mental self-discipline that most Americans will say they are too busy to do (I’d say they are too lazy).

Anyhow, Barber also deftly handles issues in neuroscience and shows how psychotherapy can actually change people’s brains and cognitive systems in much the same way we’ve long been told that Prozac and its cousins do (even when they don’t). I won’t belabor the neuroscience part of his book or CBT any further. They speak for themselves. Regardless of what Kramer and Warner believe.

Let me address something else: I’ve heard from a few readers that they are disappointed that Barber doesn’t tackle bipolar disorder and schizophrenia and that he is too “pro meds” for these conditions. The reality is that Barber’s perspective is shaped by his years as a social worker in some very intense homeless shelters and low income housing facilities in New York City and Connecticut. Having reported on and worked in some of the same sorts of facilities out this way, I understand where he’s coming from. There’s a large chunk of one of the book’s later chapters devoted to a man diagnosed with schizophrenia who goes from freaking on the streets and smoking crack to taking Haldol and getting a whole bunch of “environmental enrichment,” for lack of a better term, and then suddenly he gets stable enough for housing and then he winds up as foreman of a jury. It’s a truly remarkable story and, yes, antipsychotics were a big part of this man’s success. So was not smoking crack. If anyone has trouble wrapping their minds around the fact that the folks who show up at homeless shelters with mental disorders are so ill that antipsychotics are the only way to reach them effectively, then they are kidding themselves. I’ve seen this myself.

So there you have it. This is an excellent, readable book that people should consider buying. Barber’s own website is here.

Philip Dawdy is author of the excellent blog, Furious Seasons. This book review is reprinted here with permission. All proceeds from purchase of this book through our Amazon.com link will be donated to Furious Seasons.