Reviews Home » Disorders » Depression » Coming of Age on Zoloft: How Antidepressants Cheered Us Up, Let Us Down, and Changed Who We Are 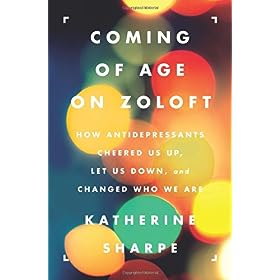 Memoirs have a unique ability to give life to a possible journey that a reader is considering making.

“Coming of Age on Zoloft” by Katherine Sharpe is one such memoir.

Prozac, the first and probably the most prominent of the Selective Serotonin Reuptake Inhibitors (SSRIs) was approved as treatment for depression in 1987.

By the 90s, it was so widely used that it had become embedded in American popular culture. The memoirs of Lauren Slater, “Prozac Diary,” Elizabeth Wurtzel, “Prozac Nation,” and the touting of its effectiveness by psychiatrist Peter Kramer, “Listening to Prozac,” were important factors in this embedding.

In the same spirit, Sharpe describes the experience of a new second generation of SSRI users in her “Coming of Age on Zoloft.” She tells the story of those who were put on the medication in their teens. In Sharpe’s words, “This is a book about what it’s like to grow up on antidepressants.”

The writing alternates skillfully between the memoir of Sharpe’s own coming of age, interviews with forty fellow depression sufferers ranging from late teens to early middle age, and chapters about the history and social meaning of this phenomena that are truly scholarly. This last should not deter readers, because the writing is very clear.

The author states that her hope is that the book will be useful to antidepressant users and their families as well as contributing to the ongoing debate about Zoloft and the “medicalization” of society to the extent that ordinary feelings of sadness and anxiety are treated as symptoms.

Memoirs of mental illness and recovery have proliferated in recent years and Sharpe is following people like Slater, Kay Jamison, Elyn Saks, Martha Manning, and Annie Rodgers among others. Sharpe’s memoir does not approach these others for emotional impact. However, it’s a convincing and worthwhile account.

The portions of the book where Sharpe’s offers the big perspective are very strong. Having covered some of the same material that she did, I can say that she captured almost all of the main points of the SSRI revolution. She does an especially good job on the rickety theoretical foundation that underlies the antidepressants. She points out how backwards the theory is in that “the cure” was found first and then the condition of depression was fleshed out. In her words, “Antidepressants were invented by accident — twice — and scientists drew conclusions about the nature of the illness by investigating the action of the drugs.”

She’s also scathing about the theory that depression results from a chemical imbalance, i.e. an insufficiency of serotonin. “The phrase ‘chemical imbalance’ gestures at the truth, while deftly concealing all that we don’t know as well as the quotient of subjective reasoning that plays a part in any discussion of mental disorder.” She deals with the question of whether medication is more effective than psychotherapy through her own experience and research findings.

There are a number of issues covered in this book, including questions that people on antidepressants ask themselves.  Sharpe expresses the universal question, Who am I?, from her own drug-shadowed perspective. “When I first began to use Zoloft my inability to pick apart my ‘real’ thoughts and emotions from those imparted by the drugs made me feel bereft.”

She touches broader issues,  such as the “medicalization” of negative feelings and the incestuous relationship between big Pharma and psychiatry. Sharpe discusses the economics of contemporary psychiatric practice, where she points that a psychiatrist out can bill four patients an hour for med checks rather than seeing one patient for an hour of psychotherapy. She also mentions that the antidepressants  have made psychiatry less of the ugly stepchild of medicine.

This is a very solid book  that is thoughtful, well written, and wide ranging. I would have liked to see more discussion about if the drugs really work? However, I realize that she couldn’t explore every issue in detail.

I’m a retired clinical psychologist who uses antidepressants and confess my own fear that what I’m using not only may not work, but may cause long-term damage. I’m thinking of quitting, but fear a relapse of my depression if I stop. I recommend this book for anyone contemplating starting antidepressants, current users, affected families, and especially psychiatric residents.

APA Reference
Siegel, J. (2016). Coming of Age on Zoloft: How Antidepressants Cheered Us Up, Let Us Down, and Changed Who We Are. Psych Central. Retrieved on November 26, 2020, from https://psychcentralreviews.com/2016/coming-of-age-on-zoloft-how-antidepressants-cheered-us-up-let-us-down-and-changed-who-we-are/