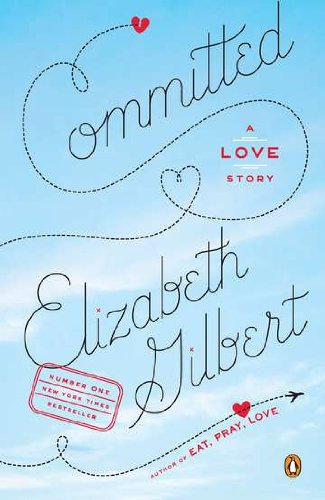 I saw it (marriage) as oppressive and outdated. And stupid and useless. And possibly very, very destructive. And I came away thinking it’s complex and long-lived. It must be here for a purpose, because it keeps being here. It’s always evolving. — Elizabeth Gilbert

Committed is Elizabeth Gilbert’s honest and compelling sequel to her best-selling Eat, Pray, Love. When Gilbert writes, she writes as an invitation — to learn, to embark on a pursuit, and to develop your own insights through her vision.

If you’re unfamiliar with her primary story: The 30-something Gilbert set out on a road of self-discovery. She journeyed to Rome, India, and Bali on a spiritual healing expedition and a quest for self-love. Toward the final stretch of her travels, she met Felipe (a Brazilian man her senior, living in Bali’s paradise), and the two ultimately became lovers who decided to share their lives. This is where Eat, Pray, Love leaves off and the beginning of Committed comes into play: Due to visa complications, the only way they would be able to reside together in the United States, which is where they want to be, is to officially tie the knot — which they both swore they would not do again after their painfully gut-wrenching divorces.

Now, Gilbert’s mission becomes to accept marriage, despite being filled with skepticism about its inherent structure. While she and her husband-to-be uproot themselves and wait for the appropriate paperwork to maneuver through the bureaucratic process, Gilbert pours herself into the study of marriage and interviews women on the subject matter during a hiatus in Southeast Asia.

One prominent, jarring distinction between marriages in American culture versus others is that modern Western culture adopts the notion of romantic love and happiness in marriage. Still, the women Gilbert spoke with on one particular day in Vietnam could not stop laughing when asked about how they first met their husband, or when they were prompted to tell their tales of being smitten. They fell into marriage pragmatically, as with arranged marriages in the U.S. a century ago, and yet they had these romantic stories, too.

Here’s another interesting historical fact: According to Gilbert, the early Christian fathers didn’t view matrimony as “holy” or “sanctified,” but as a repugnant practice that countered their aspirations for purity and celibacy. And eventually, when marriage did embody romantic love, American society became renowned for the idea that matrimonial existence is supposed to encompass “your life expectations of happiness into the hands of one mere person.” That sounds like quite the expectation, and not necessarily an emotionally healthy one.

Gilbert admits that she might have been harboring an overload of expectations in a spouse, too. Despite her thought process regarding love in her younger years, grown-up Gilbert sees Felipe as someone with whom she can be part of a team, as they bask in their compatibility, but not be someone who is going to “complete” her. One plus one equals two, she writes.

So, how does Gilbert attempt to make peace with marriage? In part, she researches and reflects and seeks a positive outlook that could come in handy for her “big day” — but at large, her approval of matrimonial life results from an alternative (and rather eye-opening) mindset. While I will certainly bite my tongue for spoilers, I can say that she has British author Ferdinand Mount to thank for that final bit of needed comfort.

If you’ve ever pondered the ins and outs of marriage, along with its extensive history, Committed is an excellent book to delve into during your free time.