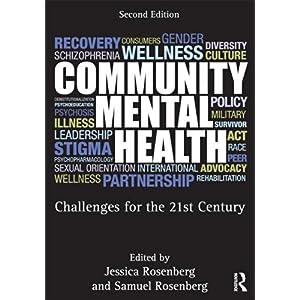 Community mental health can cover children and senior citizens, hetero and gay people, soldiers, legal offenders, homemakers, working people, non-working people, people of every race and ethnicity, and people with relatively minor psychological problems all the way to people with debilitating syndromes. It can cover people living alone on a farm or in a cabin in the woods, and those living in urban and suburban areas. It encompasses older treatments and modern, evidence-based treatments. Because it includes that much, a textbook on the subject must cover a lot. The second edition of Community Mental Health: Challenges for the 21st Century, edited by Jessica Rosenberg and Samuel Rosenberg, does touch on all of these topics, and more, in a mere 344 pages. The breadth of areas covered forces the book, by necessity, to introduce various subjects without delving very deep.

While reading, I envisioned Community Mental Health as a corkboard collage, with each of the topics in it as snapshots pinned to the board. I see a snapshot of children in a classroom and a snapshot of people in prison uniforms. I see snapshots of people of every race, every geographic region. There are hundreds of pictures. Taking a few images together, you get the idea of one chapter of the Rosenbergs’ book.

For example, the chapter on children talks about learning disabilities, ADD, ADHD, depression, bullying, anxiety, abuse, neglect, poverty, violence, genetics, problems with medications and overprescribing, discrepancies in prescription rates amongst social classes, the history of child services in the U.S., and current treatment options. That’s a slew of areas, each of which could take its own book, or books, to cover. As such, the authors just discuss each snapshot, or topic, in one or two paragraphs and then move on to the next. Together, this gives us a useful introductory text for students entering mental health professions.

If you are after more information because a psychologist just diagnosed your brother with OCD or your aunt with bipolar disorder, this is not the book for you. Still, without being a student of psychology myself, I enjoyed reading the textbook, and learning tidbits of disparate subjects. The academic style of writing, with its many passive sentences, is usually tedious to read, as are would-be footnotes when they’re included in-line with the main text. Still, Community Mental Health seems a very helpful overview. And its preface indicates that this, the second edition, brings with it many updates to chapters, as well as many completely new sections.

Comparing the two editions might prove interesting as a short-term historical perspective of the mental health field. How has the corkboard changed over the years?