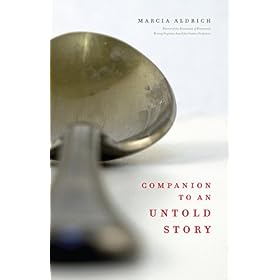 Marcia Aldrich’s Companion to an Untold Story is the author’s attempt to make sense of her close friend’s suicide. In the time leading up to the unfortunate event, Aldrich’s friend Joel hatched a plan to relieve himself of all his possessions so that when he took his own life, he would own virtually nothing, able to take solace in his decision knowing everything was taken care of.

An English professor at Michigan State University, Aldrich is a skilled and savvy writer, choosing to craft the book as something of an archive of her friend’s life. There is no narrative and there is no plot. Instead, the book consists of entries listed in alphabetical order. Some are several pages; some, only a sentence.

Throughout the book, Aldrich tries to address this traumatic event through as objective a lens as possible. Although her emotion is palpable, Aldrich almost becomes an observer or a detective, trying to piece together something she knows she can never fully understand. Yet in the process, the hope is that some level of closure can be attained, or at the very least, the grief can be mitigated.

The entries that Aldrich chooses to include are so varied and specific that we can tell she is trying to reach out for anything—trying to take any object, person, event or idea and see if it can help her better understand her friend’s decision.

What is so fascinating about Companion to an Untold Story is that we can almost see Aldrich’s mind thinking. Each entry is chosen with purpose, and in this way, each is designed to elicit something—each aims to bring about greater clarity. In the entry “Bathroom (1),” Aldrich writes:

The bathroom had technical advantages as the final choice of Joel’s occupancy… No stranger could see into this room without windows, set back from the street and reached through a locked garage. The sound of the gunshot would be muffled. Yet it would be the first room police would encounter opposite the front door. He did not want to draw out the search that would be conducted to find him. He would be considerate in his last act, minimizing the trouble his death would cause, minimizing the emotional trauma too.

It could be argued that Aldrich is putting thoughts into Joel’s head, but it must be understood that this was one of her dear friends. She knew him very well. She was intimate—not romantically—with him in a way that it does not appear many others were. As a result, Aldrich is in a perfect situation to read into Joel’s decisions; to infer what he was thinking; to extrapolate seemingly innocuous events and items into nuanced ideas that shed light on the tragedy.

Aldrich’s project seems almost impossible, her goal unachievable. But in a very real sense, she does achieve what she sets out to: she reconstructs the life of a man for whom she cared deeply, a tortured soul who could not bear the weight of the world any longer. In so doing, she does not answer every question, but there is no need to. Part of the goal is to better understand her friend’s decision. She knows she’ll never be able to truly comprehend. But, again, she can inch closer.

How did he educate himself? Did he frequent gun shops, check out weapons books from the public library? There are books detailing methods of committing suicide, in the how-to, self-help mode, as well as gun catalogs and gun shows. Did he consult anyone for advice? Read magazines? Was the process slow until he narrowed the field to his weapon of choice? Can you try a gun out and return it?

In the search for answers, Aldrich finds herself crossing into some dark spaces. In this instance, she is almost trying to put herself in Joel’s shoes. What did he think about when he was concocting his plan? Was he always going to use a gun? If not, what alternative methods did he consider? And then on to the practical side, how did he actually go about finding which gun to use? These are not typical questions one would find him- or herself asking in the wake of a friend’s suicide, but in the quest to gain closure, Aldrich must put herself in uncomfortable places.

The final obstacle that must be overcome in understanding her friend’s death is relieving herself of self-imposed guilt. Joel had sounded different on the phone leading up to his death. Why did she not pick up on that? Why did she not act on any inclinations? Questions like these are sown throughout Companion to an Untold Story. In addition to gifted writing and a unique premise, they are what drive the reader to keep going. But just as Aldrich never ultimately can, the reader, too, will never be able to completely understand Joel’s decision. As Aldrich writes in the entry “Literary criticism:”

The more diffident Joel became, the more I wanted to understand him. He became a great, difficult poem that unsettles and exhausts me and that I never get to the end of understanding.