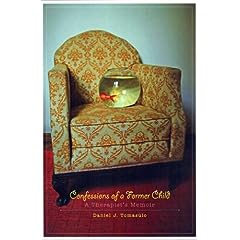 Confessions of a Former Child: A Therapist's Memoir

It’s not often that the rest of us get to view the inner life of the psychologist. The client-therapist relationship and indeed most books about therapy are focused on the client. But in his debut memoir, Confessions of a Former Child: A Therapist’s Memoir, Daniel J. Tomasulo changes the rules and uses his skills as a psychologist who specializes in psychodrama and trauma to better understand himself. As he struggles with life’s contradictions, his efforts to find meaning, and his very human failings, we are brought along on his very personal journey. Life’s lessons often come at a cost. Fortunately for him, and for us, he has a sense of humor that both blunts the painful and eases understanding.

The book begins as he packs up his home of the last ten years for a move to the Jersey shore. Tomasulo finds homely objects that trigger memories of other times. Old sneakers, a lighter, a box of pictures never sorted and papers never read, evoke stories at once funny and profound. True to the memoir form, the book is not a chronological narrative. Instead, he offers up stories as they come to him; just as we all often do when we muse about our lives.

As a boy, he created elaborate stories to negotiate an unpredictable world. An often lonely child with a vivid imagination, he believed he had the power to control all the streetlights of Manhattan and became panicked when the family moved. Who would make the lights work if he couldn’t activate them with his secret squint? Broken-hearted by his fastidious mother’s disposal of his unhygienic pet goldfish, he ran away by putting himself in his building’s dumbwaiter – and promptly got stuck. When his mother explained that she was pregnant because his dad had planted a seed in her, he limited his diet for months to only things seedless, that is, until an older kid wised him up to the fact that it was baby oil, not seeds, that made babies. Whew!

The confused but creative kid grows into an often confused and creative adult. Somehow he ends up locked in the rubber room of the psych ward at the hospital where he works when his wife is in labor upstairs. Somehow he accidently decapitates his daughter’s Ken doll in a lunatic moment of fatherly jealousy. Somehow he finds himself awkwardly providing sex education to his first developmentally disabled, but very smart, patient.

Dan Tomasulo is a funny guy. It’s what you’d expect from a man who spent his youth on the New York City stand-up circuit. But to see his memoir as merely a stand-up routine in print would do him a great disservice. Funny? Yes, absolutely. There are moments that made me laugh so hard my side ached. But underlying this collection of humorous stories is a unifying and very serious theme of a man coming to terms with himself.

Tomasulo at mid-life uses his humor to transition from story to insight. Central to the book is the loss by heroin overdose of the daredevil cousin he hero-worshiped as a child. He draws on his grief to understand a charismatic and equally self-destructive patient. Past and present are bridged by recalling similar stories, understood differently. He courageously examines his parents’ difficult union, his relationships with an emotionally frightened mother and an imperfect father, his own first failed marriage, and his vulnerability to his wife, his daughter, and his patients as he strives to forge a loving family and a solid professional life.

The book becomes psychodrama and we become the audience, invited to share in his process as he remembers, forgives, and finds meaning and joy in his experiences. He literally puts himself on a couch, becoming by turns his dead mother and himself, each arguing with and finally making sense of the other. In the end, he acknowledges that by blaming his mother for his negative feelings, he could stave off having to deal with those same feelings within himself. “You know, Mom, I really wish we could have had one of these talks while you were alive,” he says. He imagines her reply: “So do I, Danny. So do I.” While bearing witness to his struggle, we can’t help but reflect on (and perhaps even laugh at) our own.

Tomasulo brackets the book with the same story as prologue and epilogue, the memory of a dream in which the solution piece to the puzzle that is his life leaves him in darkness. Finally he realizes that he’s been defeating himself by seeing the solution piece as the end when it is really the beginning; just as finishing his book leads us to understand him and ourselves in new ways. It’s a masterful stroke by a new writer. It made me read his book twice.

Other books by Daniel J. Tomasulo:

Confessions of a Former Child: A Therapist's Memoir