Reviews Home » Confessions of a Worrywart 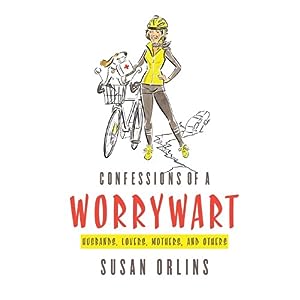 Confessions of a Worrywart

While reading Susan Orlins’s poignant memoir, I was reminded continuously of the catchphrase from the late ’60s and early ’70s feminist movement: “The personal is political.” The specifics of Orlins’s life story are hers alone, but as many of her experiences, thoughts, and feelings are universal to all women, her book was a pleasure to read.

Dubbed Confessions of a Worrywart: Husbands, Lovers, Mothers, and Others, and featuring such colorful chapter titles as “Shrinks are Like Boyfriends Who Can’t Dump You,” “Saving E-Mail, Saving Voicemail,” and “In Search of Grief,” Orlins’s story weaves through her life in rough chronological fashion. We learn of her kindergarten crush; her 20s as a single woman in Washington, D.C.; her 18-year marriage, which included stints of living in China and also produced three kids; her divorce; the loss of her parents; and, eventually, her life as an active and happily-independent divorcee with grown daughters.

Her writing is candid, vibrant, funny, and touching. Even so, I found myself reading more slowly than usual, simply because her stories were so evocative that they prompted near-constant daydreams, in which I’d remember similar personal incidents and ponder my reactions and feelings. I found myself alternately nodding along with recognition and recoiling in shock. As a woman in the same age range as Susan’s daughters (I feel I know Orlins so well by now that I can’t help but think of her as “Susan”), I can recognize that some things have stayed the same since the previous generation, but that, thankfully, others have changed drastically.

In the aforementioned “Shrinks” chapter, for instance, which spans 1967-1976, Orlins recalls snippets of her interactions with the various therapists she saw in her 20s. I cringed through her entire account of Dr. Miller. She begins, “When I walked into his office for my initial consultation, he hugged me — too long and too hard. As I unfolded the story of my life, he kept interrupting to tell me about his amorous triumphs” — and as I read I realized that my lip was curling back in distaste.

By the time she describes how Dr. Miller fell asleep in one session and later invited her to join a “nude group session,” which she declined (thank god!), as well as to try hypnosis, which she accepted (oh god, no, Susan!), I was completely keyed up, imagining being placed in those situations by a (male) therapist myself. I could not understand the sanguine manner by which she documented what seems to me outrageously unprofessional behavior. Perhaps we can chalk this up to “Wow, we’ve come a long way.”

But at many points in her story, I found myself chortling or nodding along in recognition. Early in the book, Orlins describes choosing her college major and minor based not on her passions, but on what she got her best grades in, and what would most likely lead to a job. She says, “…my father insisted I have something to fall back on. There was always this falling back, a requirement to stockpile safety nets, as if it were unthinkable to surge through life upright or tilting forward.” I loved her phrasing there, and empathized with her situation completely. Will that dynamic between parents and children ever change?

Likewise, on page 227 I groaned aloud at both the author and myself when I read this reference to a man she was seeing: “As with the no-soap, I quickly dismissed anything about his looks that detracted from my interest; I wanted to be gaga over him.” That hit a little close to home. I’d venture that many, many women identify with that tendency to want to want a partner more than one actually does want him, and to ignore the little twinges of misgiving.

No matter if I identified with her feelings or not, Orlins’s colorful prose made me smile. A few of my favorites: “My idea was that a psychiatrist ought to be able to mold my mind, the way a plastic surgeon could change a person’s nose” (p. 62); “ ‘When we’re engaged, you can pick me up.’ If you have never gone through a divorce, let me propose you prepare for this kind of gut-flip-flopping, bile-choking, brain-exploding remark to just fall out of your mouth without warning. Peter was decent enough not to break the date” (p. 169); and “Don’t mistake me for a sleek, zippy cyclist hunched over racing-style handlebars. I am none of that. I plod along high and upright, arms spread wide, more Mary Poppins than Lance Armstrong” (p. 249).

Orlins’s delightful writing style, combined with a touching look back at the major relationships and events she’s lived through, made this a captivating read. I was sorry to reach the last chapter, and I highly recommend her book to any “worrywart” looking to peek into the mind of a kindred spirit.

Confessions of a Worrywart: Husbands, Lovers, Mothers, and Others

Confessions of a Worrywart