Reviews Home » Count Me In: How I Stepped Off the Sidelines 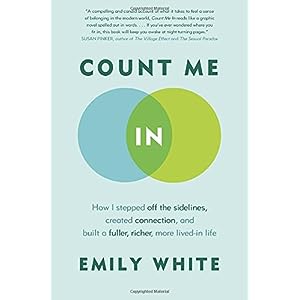 Count Me In: How I Stepped Off the Sidelines

In her last book, Lonely: A Memoir, Emily White explored — through research and her own and others’ experiences — the emotions, effects, and prevalence of loneliness. In that book, she was fresh out of a relationship and craved the intimacy she felt was eluding her.

In her new book, Count Me In, she seeks a different kind of connection: not intimacy, but a sense of belonging to a larger world.

White believes that we all need to belong to a community beyond our intimates, and that such belonging is harder to come by than it once was.

“Gone were the lifelong club memberships, the smoky union halls, the neighbourhood coffee klatches, the boisterous campaign meetings, the friendly bowling leagues,” she writes. Now that we’d lost a great deal of public life, we had lives that were “strictly private.”

The trouble with this, she explains, is that a small circle of connections leaves us vulnerable should we lose one or more for any reason. And even more important, she says, a life of only intimates means we have surrounded ourselves with people who are similar to us, who reinforce who we are. This makes our world small — it makes us small — because we never know who might be outside our element.

So White designs for herself a project, a quest, to find places, groups, activities to which she can feel she belongs. She wants to find experiences that aren’t intimate but that tie her to a larger humanity.

She starts by identifying the things she cares about, the times in the past she has felt she belonged. She reads research. She talks to friends. She makes lists of qualities she wants in a group. And she experiments — joining an aquafit class, a yoga class; visiting coffee shops, the library. She joins a group of activists protesting conditions at a local slaughterhouse, works in a community garden, attends church.

Weaving sociology and psychology research with her own thoughts and feelings, White takes us along with her as she tries, to varying degrees of success, to find a place where she fits.

White doesn’t seem know what she want and flounders from one thing to the next — and that disoriented feeling is familiar. This sort of belonging is a “know it when I feel it” type of thing.

And so the stories in the book are sometimes uncomfortable, both for her and for us. White is both drawn and repelled by the experience of joining a protest, but we push through her discomfort with her and hold up a political sign. We suffer through the agony of rejection with when a woman she recognizes from her yoga class ignores her friendly smile. And we suffer through a church discussion group where a young, unseasoned leader can’t quite get things rolling. (“It was like being at an extremely awkward dinner party with no booze to cut the strain.”)

White decides that while yoga is great, the fact that she has to pay for it makes it unsatisfying: After all, if her financial situation changes, she’s out of the group.

At the swimming pool, she opts out of aquafit because she is too different from the other women in the class to feel a sense of belonging. She does start showing up at the pool regularly to swim laps, but then feels uncomfortable when the other people there accept her and make her part of their swimming pool clique.

Later, she writes, “While some people might love a local place filled with conversation, I needed a place where I’d be welcomed and recognized without feeling like I had to show up every single week, or that I had to talk when I did show up.”

After all these attempts at finding a community that feels right, White concludes that a common cause or belief is particularly good for cohesion, that the skill of a group leader makes a tremendous difference, and that joining a group doesn’t mean she must forego all boundaries. She can, for instance, decline to distribute fliers but agree to hold a protest sign if that’s what works for her.

And yes, in the end she finds a place she feels she belongs — but the book is less about the specifics of what she finds than the journey to get there, and the reasons it works for her.

Although Count Me In is about White’s experiences, it prompts readers to think about our own lives, interests, needs, and — most important — communities or lack thereof. It makes us think about whether we have insulated ourselves from a larger world with layers of friends and family, about what it takes for us to feel like we belong, and about how we can find this kind of connection: one that’s good for us, and also good for the world we live in.

Count Me In: How I Stepped Off the Sidelines, Created Connection, and Built a Fuller, Richer, More Lived-in Life

Count Me In: How I Stepped Off the Sidelines

APA Reference
Dembling, S. (2016). Count Me In: How I Stepped Off the Sidelines. Psych Central. Retrieved on February 26, 2020, from https://psychcentralreviews.com/2016/count-me-in-how-i-stepped-off-the-sidelines/