Reviews Home » Defending Happiness, and Other Acts of Bravery 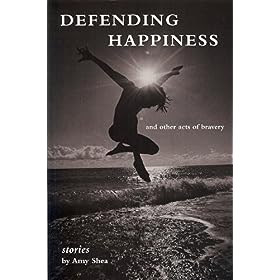 There are a lot of books about how to become happier. Amy Shea’s Defending Happiness, and Other Acts of Bravery takes the goal further. It’s not enough to find your bliss, she tells us: You have to defend it. Better yet, she conveys that point not through hackneyed self-help language, but a collection of amusing personal essays.

The author< is both a well-established poet and a brand marketing expert, and it is this odd combination that positions her to use a series of smart, practical anecdotes to examine the deeper spirituality inherent in pursuing a happy life. Her stories range from the incredibly serious to the incredibly witty. In “Aging Expensively,” Shea confronts her increasingly complex beauty needs and confesses to her grandson that “Grandma is old.” In “Uncommon Grounds,” “Rainbows,” and other essays, she explores how we place ourselves in the world of family, both genetically and emotionally, and the effect of our parents’ achievements and failings. In “Bohemia, Revised” and “Alpha Males,” she takes on the dating world, and in “Questions for God” she ties some narrative threads together in a comprehensive way. Each essay is an interesting mix of light humor, searing detail, and profound insight. Shea writes on such wide-ranging topics as skin care regimen, getting drunk, travel, parental illness, and feminism, and by the end everything is folded inextricably into the greater story of how the she grew into happiness and learned how to stay there. Two aspects of the book that stand out are the quality of Shea’s humorous observations and the effectiveness of her message delivery. “Not giving a shit, it turns out, is quite a youth elixir” is but a taste of the author’s wit, which is present even during serious times. The book would be a lot drier to read and a lot tougher to agree with if the anecdotes weren’t told tongue in cheek. Shea’s message -- that being happy isn’t easy, but, rather like anything else worth having, it’s worth working for -- is also inspiring. By the last chapter, after learning through Shea’s experiences and seeing her progress, we are ready to give it a shot ourselves. Even if that means fighting off criticisms and disappointment from others. It is a little odd to think of such a personal work as a self-help or instructional aid, but sometimes, and especially for some people, it’s the best way to learn. For example, take the honest and at times humorous look at Shea’s experience with breast cancer. One could be forgiven for thinking that the author is making light of a serious situation for many women, but she admits both the positives and negatives of her health crisis. She tells us how she used cancer as an excuse to make significant changes in her life, as a “rocket that shot me into an orbit where a certain weightlessness applied,” recognizing that “one’s life changes remarkably when one fears death more than embarrassment.” She also notes that you do not need to get cancer to learn to appreciate life’s opportunities in this way. This is, of course, in between her comparisons to Invasions of the Body Snatchers.

Such candor is present in all twelve essays. Both the lessons Shea has learned and the ones she has yet to learn make for a satisfying and deep, yet quick and light, read.

But honestly, any book that uses an excellent, extended analogy of fantasy football to explain the nuances of romantic relationships is worth a look for that section alone.

APA Reference
Williams, K. (2016). Defending Happiness, and Other Acts of Bravery. Psych Central. Retrieved on May 27, 2020, from https://psychcentralreviews.com/2016/defending-happiness-and-other-acts-of-bravery/

How to Handle Unhelpful Thoughts