Reviews Home » Disorders » Schizophrenia » Demons in the Age of Light: A Memoir of Psychosis and Recovery 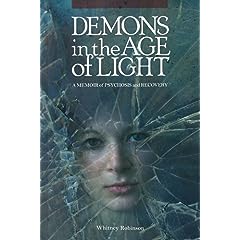 From the very first paragraph of Whitney Robinson’s first book, Demons in the Age of Light: A Memoir of Psychosis and Recovery, her way with words is not only apparent, but glaringly so.  Reading further, I was immediately impressed with her ability to convey sight, sound, and feeling with such accuracy that, in my own mind, I actually saw, heard, and felt that which she was writing about.  Her extensive vocabulary seems beyond that of many others her age and she uses it freely and willfully in telling her compelling story.  Having read The Trial and Death of Socrates when she was only ten years old perhaps gives us an idea of her interests early on in life.

The book opens as we join the author in classes on her first day as a college student.  Looking back now, I cannot help but wonder if the choice of some of her classes was perhaps an unconscious attempt at understanding both the world around her and the one within her.  As her companion on this journey, from being aware that something was amiss to confirmation of that awareness by a diagnosis of schizophrenia, readers become witness to her struggle to distinguish fact from fiction with regard to the voice she begins to hear in her head.  Is it her own or is it that of the Other, as she came to call him?

Symptoms of schizophrenia can include hallucinations, the feeling that your thoughts are being controlled by another, and hearing voices that other people do not.  She relates the power the Other had over her in a statement of realization that “…a little more self becomes a little more the Other, to the point where separate pronouns are hardly needed.”  Her horse seemed to be the only constant in her life that did not ask of her anything more than what she was able to give and gave her the sense that her “soul was salvageable.”

Robinson’s accounting of her multiple institutionalizations gives readers a glimpse inside the walls of these unwanted but often necessary homes away from home, as well as a look at psychopharmacological medications prescribed that may or may not be successful.  During the interactions that take place between her and her doctor, you come to appreciate how difficult it must be for both patient and doctor to treat this disorder.  She and her family also utilized far less conventional methods in attempts to banish, control, or manage her thoughts and behaviors, including a shamanic intervention and even an exorcism.  It seems that each had its place at that particular point in time in providing some form of relief for both the short- and long term regardless of how mainstream the treatment was.

In quite a few instances, there are portions of the book I found to be disturbing; so much so that they caused me to not want to read beyond that particular passage.  In the author’s relaying of thoughts — that even I was unsure was hers or the Other’s at times — I found myself anticipating what might be coming next and it was certainly not something I wanted to read.  It seemed that she may have already had a tendency for thinking in a manner later demonstrated by the Other and perhaps this is where the uncertainty for me came in trying to determine whose thoughts were whose.

Demons in the Age of Light sometimes reads like a work of fiction rather than a memoir.  In the Author’s Note prefacing the first chapter, Robinson states, among other qualifiers, that dialogue was “reconstructed where memory fails” but that the book reflects “a genuine attempt to describe a real experience.”  After reading that, I could not help but think of the controversy that surrounded the book A Million Little Pieces.  In that book, the author presented it to be a true story of alcohol and drug addiction.  Its authenticity later came into question when certain facts presented in the book could not be verified.  It is possible that doubts about Demons in the Age of Light have been avoided as Robinson was prudent in detailing up front the ways in which she chose to write about her experience.

Owing in part to her undeniable gift as an author, you are drawn in from the beginning to experience the relative calm before the storm, the full-blown storm itself, and the aftermath in its wake.  According to the National Institutes of Mental Health, schizophrenia is a chronic, severe, and disabling brain disorder affecting only one percent of the population, with most people coping with symptoms of the disorder for the rest of their lives.  Demons in the Age of Light may be the starting point for Robinson’s career as a writer and could quite possibly be the silver lining behind the dark cloud of her own diagnosis of schizophrenia.

APA Reference
Klein, T. (2016). Demons in the Age of Light: A Memoir of Psychosis and Recovery. Psych Central. Retrieved on July 12, 2020, from https://psychcentralreviews.com/2016/demons-in-the-age-of-light-a-memoir-of-psychosis-and-recovery/