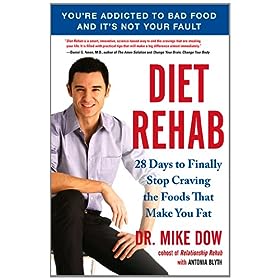 Diet Rehab: 28 Days to Finally Stop Craving the Foods That Make You Fat

It seems that you read or hear about a new diet every other month or so that promises to help you lose weight and keep it off.  Discipline and willpower to stick with the diet plan of choice is occasionally in short supply for someone on a diet.  Yet here is where a brand new way of looking at reducing one’s weight and keeping it off takes an unexpected twist.  What would you say if you discovered that “You’re addicted to bad food and it’s not your fault”?  Those who have tried every new diet and failed may finally discover why they were unsuccessful.

In Diet Rehab: 28 Days to Finally Stop Craving the Foods That Make You Fat, Dr. Mike Dow shows you in no uncertain terms how brain chemistry is responsible for our addiction to certain foods.  With a masters degree in counseling, family and marriage therapy, as well as a doctorate in psychology, Dow also is a co-host of TLC’s hit show, Freaky Eaters.

“Overconsumption of high-fat or sweet and starchy foods has taught your body to stop making enough of its own dopamine or serotonin, while tolerance has caused you to need ever-greater quantities of those tempting foods just to feel normal.”  And there you have it, a reference to the two neurotransmitters playing roles in our addiction to food.  Dr. Dow’s Diet Rehab is a 28-day program that consists of adding “booster” foods and activities while, at the same time, putting your body through a gradual detox by reducing “pitfall” foods and thoughts.  The goal is to become free of pitfalls altogether, relying on boosters for a healthier production of either one or both of those neurotransmitters.

Using his training as a cognitive-behavioral therapist, Dr. Dow identifies seven pitfall thought patterns to avoid:  personalization, pervasiveness, paralysis-analysis, pessimism, polarization, psychic, and permanence.  On the flip side of that he also gives dieters seven booster attributes to master:  purpose, peace, pride, power, passion, productivity, and pleasure.  Even if you do not struggle with your weight, this diet plan has some very good overall information to ponder.

After first reading about food addiction – he tells his patients that “food is the most socially acceptable drug of choice” – you move on to look at the way your brain reacts to food.  This cause-and-effect relationship is probably not something you think about, or have ever thought about, when you are eating those foods that fall in the category of I-know-it’s-bad-for-me-but-it-tastes-so-good.

So how does one know if they are “hungry for serotonin” or “ravenous for dopamine,” or, in some cases that could be likened to a double whammy, “starving for serotonin and desperate for dopamine”?  Two quizzes consisting of 30 statements each are presented for you to rate the frequency at which each statement applies to you (never, rarely, sometimes, frequently, always).  A formula then is used to calculate your score, identifying the level of neurotransmitter imbalance or lack thereof.  Dr. Dow recommends that both scores be obtained as they are necessary for selecting the appropriate version of the diet.

With that knowledge firmly in hand, you will also read about emotional eating, obsessive eating, and binge eating.  Quizzes are provided there as well to assess if they might also be factoring into your eating habits.

One study referenced in Diet Rehab may help to illustrate the theory of food addiction very well.  “The brain-stimulating effects of sugar are so addictive that mice whose ability to taste sugar had been removed still chose sugar water over regular water every time they were presented with both.  Clearly, neither taste nor ‘psychology’ were involved.  The mice were responding purely to the chemical effects of sugar.”

According to the World Health Organization in February 2010, one billion adults were overweight.  Without action that number is expected to climb to 1.5 billion by 2015.  Even more disturbing was their statistic that, globally, 42 million children under the age of 5 were overweight.  They see this as one of the most serious public health challenges of the 21st century, as these children are likely to become obese adults.  Even as I was writing this review, the Centers for Disease Control and Prevention in the United States came out with a new study that predicts obesity rates will increase 42 percent by the year 2030, with severe obesity predicted to double from 5 percent currently to 11 percent.

Diet Rehab provides a step-by-step program – complete with lists of booster snacks and meals, manageable servings of pitfall foods, seven days of quick and easy recipes, and other helpful tools – that can make it easier to be successful in your next diet attempt.  When you make the determination that you are not ready to be included in the dire statistics predicted by the World Health Organization and the Centers for Disease Control and Prevention, pick up a copy of Diet Rehab.  You have only that excess weight to lose.

Diet Rehab:  28 Days to Finally Stop Craving the Foods That Make You Fat

Diet Rehab: 28 Days to Finally Stop Craving the Foods That Make You Fat