Reviews Home » Disturbances of the Mind 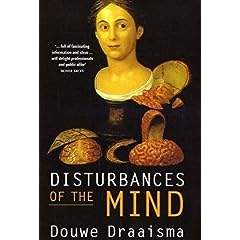 Disturbances of the Mind by Douwe Draaisma is a book regarding various illnesses ranging from Bonnet Syndrome to Alzheimer’s, with an entire range of brain diseases in between.  It provides an interesting narrative about how each disease came to be identified, by whom, the disease’s symptoms, and how it came to be named.  This book provides a historical background on these diseases and would be particularly useful for persons interested in the medical field.  It may also provide some insights on the disease for people with family members or friends who may unfortunately be afflicted.  This book, while interesting, is not deemed a page-turner initially.  However, it continues to pique the reader’s interest and even becomes quite fascinating in the latter chapters.

While each disease is covered in its own chapter, discussion of items such as how it came to be named tends to extend over several chapters. It is informative, entertaining and clearly written, and the author gives the impression that what happens after a disease is discovered is more relevant than the discovery itself.

The question of what happens after a disease is discovered is crucial in determining who gets credit for the discovery.  Time and again, the author illustrates examples of this.  Broca’s area, which is the area of the brain known to be associated with aphasia, was initially discovered by Marc Dax and subsequently his son Gustave Dax.  However, the senior Dax never published his findings, and the junior Dax finally published his findings on April 28, 1865.  Broca then began to address the chronology of the discoveries.  The author writes that Broca did not question the authenticity of the report but said, “I wish to establish that it was impossible for me to guess the existence of the paper that was brought to light two years after my first publications on the subject of aphasia.”  This neatly restored the chronology despite the fact that Broca had still claimed that power of speech was represented bilaterally.  Although Marc Dax was the first to claim that the left hemisphere, when damaged, could give rise to aphasia, he failed to publish.  Meanwhile, Broca took careful notes and published all his findings; thus, it is now known as Broca’s area.

Research is invariably subjective, no matter how objective the experimenter tries to be. Broca used several techniques to strive for objectivity in his research, such as measurements taken with special tools, and also stressed that “observations are more important than theories.” Broca felt that exacting measurements were the secret to his success but critics today see it as a “prime factor behind his failure.”  Even before the measurements were taken, the wording of the question was “clouded by the bias of the researcher.  Is the frontal lobe of women as large as that of man?”  Broca conducted no blind measurements and had no control conditions.

Disturbances of the Mind succeeds on many levels.  It discusses a range of brain diseases in a detailed and interesting manner.  It is written in a concise, clear style that both consumers and medical professional can understand. It also delves a little more deeply than just apprising the reader of a disease and its symptoms. It weaves a narrative of disease from discovery to naming to how the disease came to be known to the researcher, and notes the importance of the researcher’s actions after the disease’s discovery. The effect of researchers’ unwitting biases on the outcome of their research is also discussed.

The book covers other concepts as well, including the ways that patients afflicted with a particular disease learn to see themselves over time. For example, Tourette syndrome — which is characterized by grimaces, blinking, motor tics and in severe cases, parroting and coprolia (swearing) — can lead to social isolation.  Back in the Middle Ages, a Tourette patient would be seen as ‘possessed.’  In the early 1900s, a Tourette patient would believe that his disease was the result of a weak will and inadequate control.  Today’s Tourette patients know that they don’t have a psychological defect, that the disease is organic in nature.  This has removed the burden of shame from today’s Tourette sufferers.

The book goes into great detail in many aspects of the diseases it covers.  A notable omission in the chapter on Asperger’s Syndrome (in which patients are averse to social contact and change and have one or two obsessive interests) is the possibility of mistaken diagnoses and Asperger’s position on the autism spectrum. Nor does the author discuss the controversy over the belief that childhood vaccines cause autism, although this has been clearly, scientifically disproven.

Readers may come away with more empathy for those deemed ‘crazy.’ My limited encounters with ‘crazy’ people in the past whereupon I later discovered them to be bipolar left me with feelings of frustration and impatience as coherent communication with such persons was next to impossible.  Seen through the lens of a broadened perspective, I now realize more fully  how these symptoms are a result of organic disturbances. It allows me to develop more tolerance and patience in interactions with such persons.

The chapter on Parkinson’s Disease also brought to mind memories of my father-in-law, who suffered greatly in his daily life from this debilitating disease.  It is interesting to note that one of today’s potential treatments involves deep brain stimulation and one of the treatments used in the late 1800s was a ‘shaking chair.’ It is also sad to note that while there have been many medical advances made, there is still no cure for Parkinson’s Disease.

To summarize, this book provides an interesting account of various neurological diseases that at times borders on the fascinating.  It provides the reader with a broadened scope of how diseases came to be discovered, and ultimately, the actions one must take in order to be credited for its discovery — for a discovery is one thing, but to bring the disease and possible treatments to other people’s attention is quite another.

It also makes clear that despite the researcher’s intent to maintain complete objectivity, it is impossible to ‘observe and nothing more’ as Charcot warned others to do. Facts and findings are gathered by observations; observations are seen through the lens of the researcher and the theories the researcher holds.  Autistic children in studies performed in the 1950s were deemed to have ‘refrigerator mothers.’ This fact has now faded into the background because opposition to the independence of women has also now faded.  The researcher employs methods to maintain complete objectivity and yet the researcher is unconsciously ‘carried along by the insights of his day.’