Reviews Home » Doctors of Deception: What They Don't Want You To Know about Shock Treatment 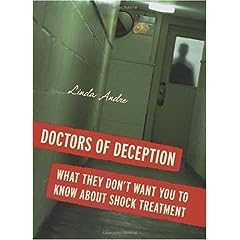 Doctors of Deception: What They Don't Want You To Know about Shock Treatment

Linda Andre’s Doctors of Deception: What They Don’t Want You To Know about Shock Treatment is a book that is impossible to ignore. The book was written by a shock treatment victim who lost a profound amount of valuable memories and skills because of treatment that she was given essentially without her consent. She once was an award-winning writer and photographer and now she has become a force to be reckoned with. This book struck a chord in my heart because her descriptions are so well written and so absolutely heart-wrenching that it is impossible for anyone to erase once they have read it.

The first chapter of this book is all about Andre’s life before and after shock treatment. Her first-person account of forgetting herself (not her name, all the things that made her unique) and what it is like to know you’ve forgotten something very important and having no clue what that might be is touching and threatening at the same moment. But surprisingly, that isn’t the worst part — the worst part is that no one will believe you. Andre describes the loss of memory that results from shock treatment:

After the first chapter readers will already find themselves horrified by what it must feel like to lose everything important to them, but sadly, more horrors are in store. The book goes on to mention The Final Solution (the Jewish genocide during the Nazi years in World War II-era Germany) and the terrible public relations strategies that were — and in some cases still are — employed to make sure people don’t rise up and outlaw shock therapy. The Final Solution had a precursor and that idea was experimentation, sterilization, and elimination of the mentally ill. That idea did not begin with the Germans. The idea came from one of America’s finest, a Nobel Prize winner, Alexis Carrel, who thought that the mentally ill should be gassed to death.

Germany took the concept to the labs and began experimenting on the mentally ill as if they were lab rats. Such things as drugging them to sleep, injecting them with viruses, forcing them to breathe in carbon monoxide and even lobotomies were used because scientists felt that mentally ill people were subhuman. Mental institutions of the time are said to have killed nearly 300,000 people through these experiments.

One of the most troubling aspects of this book is the history behind ECT: The first shock treatment was a complete mistake. A scientist injected his patient with too much insulin and then decided her mind was more stable after the coma (probably due to brain damage). This mistake made Manfred Sakel devote the rest of his life to intentionally overdosing patients to try to replicate the result. Later on, Ugo Cerletti noted that pigs who were zapped on the sides of their heads with electrodes seemed to be OK after the experience. It did not appear to kill the pigs because after the shock they would eventually get up and move about in a more docile manner. The complete history is even more horrifying.

After Andre covered the historical elements she moved on to a woman named Marilyn Rice who was also a shock victim. Rice spent her life after the treatment researching and lobbying for informed consent for potential shock patients. Andre became associated with Rice later in her life and has reproduced a large quantity of her findings in this book. Rice’s stories about government coverups, corruption and lies are quite extensive and have been researched very thoroughly. Rice’s findings directly address the Federal Drug Administration, the National Institute of Mental Health and many other “trusted” institutions’ roles in the battle to keep shock treatment alive.

Two advocacy groups have resulted from shock treatment victimization: Leaving shock as a legal choice or banning it entirely. Andre comes down clearly on the side of the ban.

I recommend this book because the writing style and the research are superb and because people need to know about this “treatment” option from a victim’s point of view.

Doctors of Deception: What They Don’t Want You To Know about Shock Treatment

Doctors of Deception: What They Don't Want You To Know about Shock Treatment

APA Reference
Fournier, G. (2016). Doctors of Deception: What They Don't Want You To Know about Shock Treatment. Psych Central. Retrieved on August 14, 2020, from https://psychcentralreviews.com/2016/doctors-of-deception-what-they-dont-want-you-to-know-about-shock-treatment/

"I Think My Parent Is A Sociopath:" Cluster Traits & Behaviors

How an Invalidating Parenting Style is Affecting You Today

"Is My Parent Disturbed?" How Unhealthy Parents Behave