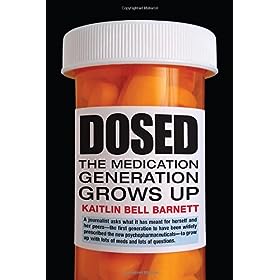 What happens when the use of psychotropic drugs in children becomes part of everyday life? If you were a child or raised children in the United States in the last 20 or 30 years, you are most likely familiar with the explosive rise in kids becoming medicated for behavioral and emotional issues.  Many questions have arisen about the reasons for this, as well as whether the nation’s youth are being overmedicated. Perhaps most important is the question of how being a “medicated kid” affects somebody as they come of age.  In Dosed,Kaitlin Bell Barnett takes a look at these phenomena from an often-ignored perspective, that of the people who were actually prescribed such medications starting in childhood.

Barnett, who was medicated at an early age, explores the issue through the life stories of five individuals who all grew up taking psychotropic medication. We get a firsthand account of the effects that these pills can have on people physically, mentally, and even socially. By selecting a variety of cases, Barnett is able to paint a broad picture of life on meds. Each story showcases a different way in which medication can affect a young person. What results is neither an anti-medication screed nor a propaganda piece for pharmaceutical companies, but rather a refreshingly honest portrayal of the benefits and drawbacks of the use of psychotropic medication in children and adolescents over the last several decades.

Dosed‘s chapters discuss different aspects of medication and its effects on young people. The individual stories are told chronologically throughout the book. Barnett is astute at interweaving information gained from professional research studies, her own personal anecdotes, and the stories of the people she interviewed. Her viewpoint is not that of a mental health professional, but rather that of someone who has a great interest in the subject in addition to being a recipient of treatment. This unique perspective only adds to the book and helps separate this volume from the barrage of personal memoirs and self-help books that one typically finds concerning mental health issues.

Barnett goes beyond just looking at the usually discussed side effects of psychiatric medication, such as possible weight gain, diabetes, or elevated blood pressure. This book is more concerned with how medication affects kids’ lives and self-concept. Children do not usually seek help themselves, but rather get sent to a doctor or therapist by their parents, teachers, or other authority figure. As Barnett points out, “In the absence of a clear explanation for treatment or a good grasp of their problems to begin with…children are left to piece things together as best as they can.” Throughout the book she illustrates that the way children make sense of their situation can have major implications for their lives, even into adulthood. Some kids may think of themselves as “bad” or “problematic,” only fixable by way of a medication cocktail, while others may view medication as a way of helping them deal with certain symptoms that may impair their ability to live up to their full potential.

Dosed also examines the way our society — including parents, the education system, and the medical system — affects the way children are influenced by medication. In some households, a medicated child may be raised by well-informed parents; doctors, nurses, or therapists themselves; who are well-attuned to the effects such medication may have on the child. Other children may be raised by caregivers who only see medication as a way of calming their kid down and stopping their “bad” behavior.

Mental health professionals also may affect how children view their treatment. Through her use of very personal stories, Barnett provides the reader with suggestions about what treatment approaches seem to be helpful.

Dosed is an important, intriguing look at the so-called “medication generation.” I believe anybody who is involved in the psychiatric treatment of children and adolescents can gain some insight from this book, whether they are mental health professionals, consumers themselves, or family members of somebody in treatment.

Taking psychiatric medication always is a sensitive issue, perhaps even more so when children are involved. Barnett’s book, of course, cannot answer every question that such types of treatment may lead to; however, it does offer a glimpse into the effects these medications can have on a person’s development.

The way that being labeled a “medicated kid” can influence someone may not be listed on the pill bottles, but it is just as important an issue to address as any other side effect. I believe that this book can provide professionals with a clearer idea of how medication can affect their clients, as well as help young people incorporate treatment into their lives in an effective manner if necessary.