Reviews Home » Parenting » Double Time: How I Survived – and Mostly Thrived – Through the First Three Years of Mothering Twins 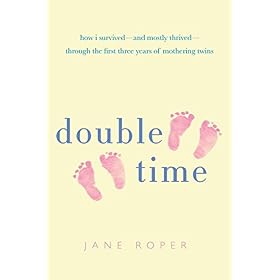 Double Time: How I Survived – and Mostly Thrived – Through the First Three Years of Mothering Twins

Jane Roper and her husband wanted to get pregnant. They were in their early 30s and finally felt ready. So Roper went off the pill, and the couple, as she puts it, gave it the “old college try.” For a year. No success. With low levels of ovulation, Roper decided to try fertility treatments. The result, to her (and everyone else’s) surprise: twins.

In Double Time, Roper is painfully honest. She details her propensity for depression with beautiful, relatable prose, and she readily admits to her agonizing anxiety before the pregnancy:

There was so much about the prospect of twins that I feared. I worried that I might love one baby more than the other. I worried I wouldn’t have the time or energy to bond with them the way mothers bond with a single baby, because I’d be so busy juggling the two of them. I worried that I’d resent them because they weren’t the single child I’d hoped for. I even found myself, in the early weeks and months of my pregnancy, mourning, a little, the one baby that I thought I’d have. As if I’d known him (or her) and he’d be gone. Vanished, replaced by this little pair of strangers.

It’s moments like the above that allow Double Time to flourish. It’s not just that Roper is a gifted writer — she undoubtedly is — and it’s not just that her subject is so intriguing (birthrates for twins are skyrocketing). It’s that she’s able to make her story somehow relatable.

I can never be pregnant, but as I read her book, I felt like I was going through Roper’s moments, good and bad, with her. She is able to pull the reader in through the subtlest of means. She is able to balance her tone remarkably well. Even in her darkest moments, she still maintains an even-keeled demeanor.

Roper does not have a placid disposition by any means. But her writing makes it feel as if she is very present and conscious—utterly aware of her circumstances. And that quality is reflected in her writing: smooth, direct prose. That combination of writing ability and no frills language is what makes Double Time such an engaging read.

Roper’s reason for writing the book is as much charitable as it is cathartic:

When I found out I was pregnant with twins, I was, to put it mildly, terrified. I immediately, desperately scoured bookstores and Web sites for firsthand accounts of what it was like to have and raise two babies at once. And although I found several straight-up how-to books and a couple of blogs…I didn’t find what I was really after: a window into what my life might be like once these two babies were born.

Roper wanted to be able to give future mothers of twins that window. Sure enough, she does. It is difficult not to overstate the honesty with which Roper writes. And at times, it’s not even her honesty that is so enthralling, but her train of thought—how her mind works. When in the labor room post-birth, she and her husband, Alistair, held their two girls and wondered if the names were right. Moreover, they wondered—if the names were in fact right—if they were giving each name to the right girl.

“‘Are you Clio?’ I asked, looking down at Baby B’s round, sleeping face: She had her father’s upturned nose, broad mouth, and wide-set eyes.

“‘Is she?’ Alistair asked, as if she had answered, and he just hadn’t heard.

To discuss anything following the initial post-birth moment would spoil a terrific read. There’s no plot twist, of course, but to describe later events would only serve to reinforce the already-established truth about Double Time: it’s well worthwhile. Roper’s wonderful prose pulls the reader in and doesn’t let go. Her writing casts a spell that readers still will wish they were under long after finishing it.

Double Time: How I Survived — and Mostly Thrived — Through the First Three Years of Mothering Twins

Double Time: How I Survived – and Mostly Thrived – Through the First Three Years of Mothering Twins