Reviews Home » Disorders » Depression » Down Came the Rain: My Journey Through Postpartum Depression 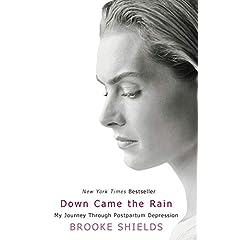 Down Came the Rain: My Journey Through Postpartum Depression

Many of us know and grew up with Brooke Shields, even as she grew older in front of us on the big screen (in mostly forgettable roles), and then later on television in the show, “Suddenly Susan.” So when she sat down to pen her memoir in battling postpartum depression, it sort of feels like you’re sitting down with an old friend you watched grow up.

There are other books on postpartum depression, but Shields’ name helps shed renewed light on this traumatic event that many mothers suffer and do not understand. Medical doctors and nurses, while well-meaning, don’t often even acknowledge the possibility of postpartum depression and their response is often limited to, “Here, let me prescribe you some antidepressant medication.”

Shields brings a warm, human voice to the tragedy of postpartum depression and, while at times repetitive, I found the book to be a heart-touching memoir of her successful navigation through a difficult time in her life. Eminently readable, it’s a recommended book for any mother who might be going through a similar event in their own lives. Nine chapters, 226 pp. Published in 2005.

In 1980, when she was 15, Shields starred in The Blue Lagoon. In the movie, her character accidentally becomes pregnant, and when her son is born, he intuitively finds his way to her breast as Shields looks on with love and contentment. The irony of this scene isn’t lost on the grown-up Shields, who not only did not become pregnant accidentally—numerous IVF cycles and a miscarriage preceded the 2003 birth of her daughter—but suffered a devastating aftermath to that birth.

“I was in a bizarre state of mind,” Shields describes, “experiencing feelings that ranged from embarrassment to stoicism to melancholy to shock, practically at once. I didn’t feel at all joyful.” Shields assumed she’d bounce back in a few days, after resting from her difficult labor. Instead, her feelings intensified: “This was sadness of a shockingly different magnitude. It felt as if it would never go away.”

While Shields denied anything was wrong, the persistence of friends and her husband persuaded her to seek treatment through medication and therapy. This brave memoir doesn’t shy away from Shields’s most difficult moments, including her suicidal thoughts, clearly showing the despair postpartum depression can wreak. While the writing is sometimes repetitive and clichéd, it does emphasize the depth of Shields’s depression. This tale will bring awareness of a problem that so many mothers have been afraid to discuss; look for this book to touch off a flurry of lifestyle pieces.

Down Came the Rain: My Journey Through Postpartum Depression

APA Reference
Grohol, J. (2016). Down Came the Rain: My Journey Through Postpartum Depression. Psych Central. Retrieved on January 23, 2020, from https://psychcentralreviews.com/2016/down-came-the-rain-my-journey-through-postpartum-depression/