Reviews Home » DSM-5 Made Easy: The Clinician's Guide to Diagnosis 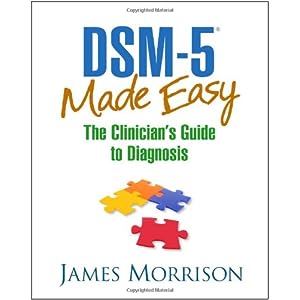 DSM-5 Made Easy: The Clinician's Guide to Diagnosis

I had just come off my first overnight shift.

From 8pm to 8am, I was the go-to resident for any issues that arose on any of the three psychiatry units, along with any emergent psychiatric consults from anywhere in the hospital. A psych patient couldn’t sleep? My pager went off. Another fell while getting himself a midnight snack? It’s my pager again. A patient on surgery mentioned that he couldn’t take this anymore and just wanted to end it all? Yup, that’s me, too. Someone admitted to the ICU after throwing himself from a moving car?

You get the picture. By morning, we’ll just say I was getting a little tired of the grating beep, beep, beep. Oh, and, in the event of a lull in all these other tasks — which happened at about 2 am — I had to tend to people waiting in the psychiatric emergency department.

Rumor has it there are sleeping quarters for on-call residents. Needless to say, I did not use them. At 8am the following morning, I dragged myself home and tumbled into bed. Rising a few hours later, I was determined to do some studying, but my still slightly addled and sleep-deprived brain just could not get up enough enthusiasm for reading dry articles or wending my way through the DSM-5.

It was in this state that I decided to give James Morrison’s DSM-5 Made Easy: The Clinician’s Guide to Diagnosis a try. Written in an approachable, straightforward manner, Morrison’s book will appeal to those who are just starting out in mental health as well as those who have been in the field for years and want to brush up on their knowledge and learn about the changes in the latest DSM.

Morrison, a professor of psychiatry at Oregon Health and Science University, has written many other professional guides, including the recently-released second edition of Diagnosis Made Easier: Principles and Techniques for Mental Health Clinicians, which I also reviewed and recommend.

As those in the field know, the Diagnostic and Statistical Manual is the diagnostic bible of mental illness, describing criteria for each officially recognized disorder. The latest edition was released last year to much fanfare. But at more than nine-hundred pages of rather monotonous criteria, reading it can feel far removed from the living, breathing patients that one encounters.

Morrison helps. He breaks each illness into a digestible format, including a descriptive depiction, or prototype, of the disorder. Using prototypes rather than check-boxes encourages us to “compare the data we’ve gathered to the picture we’ve formed of the various mental and behavioral disorders,” he writes. He also points to literature suggesting that this route to diagnosis can help even those who are rather new to the process.

Morrison spends time going over what he refers to as the “fine print” or “the Ds” — differential diagnosis, distress or disability, duration, and demographics. For some of the disorders he also includes historical comments and remarks on changes in diagnostic criteria over the years, including what has been eliminated from this latest edition of the manual.

That came in handy when my attending and I were discussing psychotic disorders. I could say with confidence that shared psychotic disorder, also known as folie à deux, had been eliminated from the fifth edition — thanks to having read about it in Morrison’s book.

The most interesting parts of each chapter for me were the clinical vignettes and following evaluations. With more than one-hundred-thirty cases in the book, virtually every major disorder comes with an illustrative example that helps to bring the criteria to life. I found it useful to read through a vignette, mentally catalog what features of the disorder the patient in question was exhibiting, then read the evaluation and final diagnosis to see how closely my own assessment mirrored that of the book.

The vignettes are realistic — arising from actual patients Morrison has seen or composites of a handful of cases — and provide enough detail to get a picture of what is going on and the primary symptomatology, without getting bogged down in pages and pages of life story. And keeping it interactive helped me engage in the reading, despite having only slept a few hours after the night shift.

My only real critique is that I did find myself reaching for my pocket DSM-5 so I could review the criteria in explicit check-box style. It would have been useful for Morrison to include such criteria in bulleted form along with the more descriptive prototype style.

Despite this, the book is worth getting: an engaging text to help the novice or the senior clinician navigate the all-important manual.

DSM-5 Made Easy: The Clinician’s Guide to Diagnosis

DSM-5 Made Easy: The Clinician's Guide to Diagnosis

Chopping Carrots and Planning for Dinner: How Hope Works In The New Normal