Reviews Home » Psychotherapy » Each Day I Like It Better: Autism, ECT & the Treatment of Our Most Impaired Children 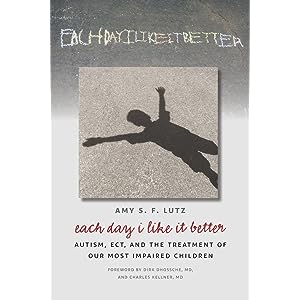 Each Day I Like It Better: Autism, ECT & the Treatment of Our Most Impaired Children

Say “shock therapy” to most people and what comes to mind?

For many, it is some version of Jack Nicholson’s experience in One Flew Over the Cuckoo’s Nest: a patient writhing on the table as a crazed doctor sends waves of electricity through his brain, all with disastrous consequences.

Even during my psychiatry clerkship as a medical student, I had some trepidation when my attending doctor recommended that I observe the electroconvulsive therapy (ECT) my severely depressed patient was receiving. I went down to the PACU and waited nervously as the patient was wheeled into the room and helped onto the gurney. She was lightly anesthetized. She received the electrical current only briefly and, with no more than a slight twitch of her right foot, was soon awake and talking, her headache managed with a few tablets of ibuprofen.

It was surprisingly non-exciting. Surely not worthy of an Oscar performance. However, the effects were profound. Over weeks of treatment, I watched as the depression that had gripped my patient for months slowly began to lift. Despite its efficacy and safety, ECT continues to stir public controversy and criticism — and this is even with consenting adults.

ECT for children sparks a whole other level of controversy. Stepping into the fray is Amy Lutz’s new book Each Day I Like It Better: Autism, ECT, and the Treatment of Our Most Impaired Children. It gives the story of one family’s struggle with autism and how ECT played a critical role in their journey to help their child.

Lutz takes us inside her family and what it is like to live with her autistic son, Jonah. Jonah, she wants us to know, is, at his core, “a sweet, affectionate, funny kid who loves water parks and roller coasters and deliberately misquoting lines from his favorite movies.” But the rages that rush over him like a sudden storm endanger those around him, as well as Jonah himself.

Like many with a child afflicted with illness, Lutz observes that “[w]hen Jonah was first diagnosed, I spent a lot of time looking for what I referred to as ‘Jonah’s miracle.’ ” She goes on to describe the diets, the hyperbaric oxygen treatments, and “even the lithium, which we had erroneously imagined as the missing puzzle piece that would meet the jagged edges of Jonah’s bipolar depression and create a complete and harmonious design suitable for framing.”

In some ways, Lutz is fortunate. She and her husband have the resources and family support to hire aides, send Jonah to private schools, and relentlessly pursue behavioral plans, special foods, and a varying cocktail of medications. At some point, however, they reach a stage where, as Lutz puts it, “[w]e don’t talk about miracles anymore.”

Such painful honesty is present throughout the book and will resonate with those who have a family member or friend with mental illness. And it is in a state of desperation that Lutz returns to ECT, an idea previously suggested to her but which she had initially dismissed. So commences her journey to better understand the possibilities and shortcomings of such a controversial treatment.

Each Day I Like It Better alternates between a chronological narrative of Jonah’s experience with ECT and stories of other families who have chosen ECT for their children. Lutz has met with each of these families personally and provides us with a glimpse into their lives, both before and after the treatment.

For instance, we meet Matthew, a nonverbal boy who was hitting himself so hard he had detached his own retinas. After ECT — and a lot of other work — he rides a school bus to school, an accomplishment that many would take for granted but that for Matthew and his family is incredible. As his father notes, “All the typical dreams went out the window the day Matthew was diagnosed.” But after Matthew underwent ECT, his father was able to imagine “a future for Matthew that involves friends, independence, maybe a job.”

We meet Gary and David, too, autistic twins whose ECT pulls them out of disabling episodes of depression and catatonia. Still, Lutz is realistic. None of these stories is a fairy tale and not all have a happy ending. One boy, for example, undergoes ECT and the treatment throws him into a mania.

In all, Lutz’s depictions are just that: realistic. Hopeful, but without any sense of blind devotion. It is clear that she researched ECT extensively before submitting her son to the therapy. Lutz also includes in the book a balanced selection of research — a taste of the undoubtedly countless articles she pored over as a concerned parent.

With a child such as Jonah, there are no easy treatments. I found myself pulled along by Lutz’s gripping narrative and the ways she depicts her family’s highs and lows with humor and honesty.

Each Day I Like It Better: Autism, ECT, and the Treatment of Our Most Impaired Children

Each Day I Like It Better: Autism, ECT & the Treatment of Our Most Impaired Children

APA Reference
Riddle, M. (2016). Each Day I Like It Better: Autism, ECT & the Treatment of Our Most Impaired Children. Psych Central. Retrieved on December 5, 2020, from https://psychcentralreviews.com/2016/each-day-i-like-it-better-autism-ect-the-treatment-of-our-most-impaired-children/