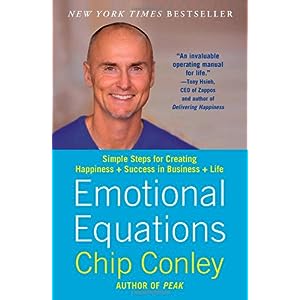 As the title suggests, Chip Conley’s Emotional Equations proposes a simplified, logical, almost mathematical approach to managing some of the modern world’s most common challenges. Drawing on wisdom from a broad range of psychology researchers, philosophers, writers, and world leaders, Conley presents readers with a number of realistic and useful formulas for thinking through problems ranging from despair to workaholism. His book has some major flaws, but is still, overall, quite a useful read.

The text belongs to the genre of business-related self-help books authored by celebrity CEOs and executive coaches. Conley is the founder and erstwhile CEO of Joie de Vivre, a chain of boutique hotels, and while he self-identifies as an “armchair psychologist,” he seems sincerely fascinated by the work of academic psychologists and how their research can be applied in the real world. Although he cut his teeth in the business field with an MBA from Stanford, Conley also received an honorary doctorate in psychology and clearly has done a lot of reading on the subject.

Conley tells us that his ideas for the book developed out of a number of setbacks. He writes: “… a series of wake-up waves culminating in my heart failure had hit me like an emotional tsunami and tested my sense of who I thought I was: a business I had built was sinking; a family member had been wrongly convicted of a crime and sentenced to [prison]; a long-term relationship had ended painfully; and I had lost five friends and colleagues to suicide.”

Struggling to keep his head and heart above water, he turned to the wisdom of Viktor Frankl’s powerful memoir Man’s Search for Meaning for solace and guidance. This spurred an interest in applying the tools of logical analysis to emotional difficulties.

The concept of emotional equations, Conley explains, may have originated with William James in the late 19th Century. Many of the equations in his book are derived from the works of other authors and theorists. His equation for despair (Despair = Suffering – Meaning) is drawn from the work of Frankl; another equation is based on Mihaly Csikszentmihalyi’s research on flow. Conley is careful to identify the original authors behind these ideas, but the bibliographical notes that follow the text are sparse, and the sources for individual quotations are not always fully cited.

But why emotional equations? As Conley explains, “An equation is just another way of expressing the relationship between two or more things — or two or more forces. Emotional Equations help illuminate … the relationships between one emotion and another and how the mix of two emotions may lead to a third.”

This book, at its core, is a thoughtful analysis (albeit in the non-academic, self-help genre) of the ways in which our emotions and experiences interact and change over time, and how these relationships shape who we are and how we feel about our lives.

Conley organizes his ideas well, with the dark, heavy problems (despair, disappointment, regret, jealousy, envy, and anxiety) grouped together in the beginning, and the loftier, more optimistic goals (integrity, happiness, joy) clustered toward the end. Appropriately, wisdom is the subject of the penultimate chapter. Although Conley notes that “there’s no need to read the chapters in order,” they do seem to follow a logical progression likely influenced by the author’s interest in the work of famed psychologist Abraham Maslow.

Each chapter follows a predictable and readable format: an introduction to the concepts in the so-called emotional equation it features, followed by practical advice on “Working Through the Equation,” — i.e., how to apply the formula to your own experiences.

The chapters on disappointment (Expectations – Reality) and regret (Disappointment + Responsibility) contain a number of quite helpful observations. Describing regret as a “first-world emotion,” Conley explains the problem of “analysis paralysis,” an experience that may be familiar to many readers. When faced with too many choices, the fear of making a decision we may later regret can prevent us from moving forward.

Throughout the text, the author presents us with a number of inspirational role models and their observations and insights on life. Scattered through the entire book are numerous pithy quotations from some of the world’s greatest thinkers: Stephen Hawking on disability, Mark Twain on regret, Mother Teresa on finding one’s calling, Nelson Mandela on fighting for one’s ideals. Conley himself offers a few gems as well (e.g., “Most of what happens in life isn’t a zero-sum game”).

Mental health professionals, particularly those with a psychoanalytic bent, may find Conley’s treatment of these issues overly simplistic and superficial, but the book is worth noting as a reference for clients and lay readers who struggle with emotion and poor insight.

Conley’s approach is similar to the logotherapy of Viktor Frankl, whose influence is clear throughout the book. Some of the advice is common sense, repackaged and branded as a mathematical approach to dealing with problems, but Conley’s rational bent and illustrative examples and stories may help readers view their struggles in a more balanced, objective light.

One of the things I enjoyed is Conley’s sensitivity toward the importance of humility, gratitude, and compassion. Discussing the destructive potential of narcissism, Conley describes how the research of Jean Twenge and W. Keith Campbell changed his own views on the subject of self-esteem. His advice on how to improve one’s self-esteem is not the superficial drivel that populates all too many self-help books (the likes of “Remind yourself that you are special”). Instead, he reminds us of the importance of discipline, patience, and shifting one’s focus towards “something bigger than you.”

Conley’s advice here is practical and realistic, just as applicable to those who suffer from too much self-esteem as to those who have too little. He acknowledges his own narcissistic tendencies and the difficulty of accepting negative feedback.

I was a little disappointed by some things in the book. The foreword and the opening chapter suggest that we will learn more about the author’s personal setbacks and heartbreaks. Instead, much of the autobiographical material in the book is a catalogue of his achivements, and the crises and dilemmas he has faced are presented in the context of Conley’s professional development. We don’t hear much about the friends he lost to suicide, why his relationship ended, or how he coped with recovery from heart failure.

There are moments during which the text reads like a condescending sales pitch, which is unfortunate, because it may alienate readers who would otherwise benefit from some of the author’s more helpful suggestions.

When describing his accomplishments and his “calling” as a writer, Conley sometimes evokes a familiar and unflattering stereotype of our day: that of the smarmy celebrity CEO who never tires of the spotlight or self-promotion. Readers who give the book a chance, however, will find that the real Chip Conley does not embody this shallow stereotype. He possesses an endearing warmth, humility, intellectual curiosity, and slight eccentricity that set him apart from other writers in the genre.

As a reader, I was left with a lot of questions. For instance, what was it like living as a gay man in San Francisco in the 1980s, during the AIDS crisis? I was surprised that Conley didn’t give this subject much attention. Surely he must have faced some struggles due to homophobia, fear of losing friends close to him, and concern about the potential impact on his company. Here Conley seems to have missed an opportunity to engage the reader with some of the more compelling stories from his experience. I wasn’t left with a sense that the author had “bared his soul” to the reader as the foreword suggests.

This renders Emotional Equations more reference manual than stirring memoir. It’s not dry or boring, but it’s not a compelling tale of one man’s triumph over adversity, either.

And while the book certainly will not teach you how to solve all of life’s problems, it is an engaging read. I would encourage skeptical readers to look past some of the shallow promotional language scattered throughout, because much of Conley’s advice is substantive, well-informed, heartfelt, and sound. Even readers who avoid self-help books may find themselves enjoying this one in spite of themselves.

Samantha Rodman, PhD, is a clinical psychologist in private practice in Maryland and a mom of three sweet/demonic kids under 4 1/2. Guess which job is harder? (Hint: not the one for which she is financially compensated.) Visit her blog at Dr. Psych Mom for a humorous perspective on parenting and psychology. She also occasionally blogs on World of Psychology (to read more of her posts).