Reviews Home » End of the Trail 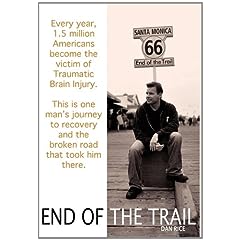 Dan Rice is rather less famous than Michael Moore, Flint, Michigan’s other disgruntled native, but he’s less upset by what happened to his hometown while growing up. So, interspersed between chapters of the story of his traumatic brain injury and recovery (such as it is), Rice tells tales of the idylls of Flint in the 1970s, when everybody worked for General Motors and “blue collar” wasn’t a pejorative. The trouble is that Rice was only 5 when Flint started its downhill slide. It’s a metaphor for the way the rest of the book is constructed, as well: nonsensically.

In Chapter 1, Rice talks about the aftermath of his accident, including how he lost the ability to read. In Chapter 2, he tells us how the accident happened – a bit backward, as storytelling goes. (An SUV hit his car, he went airborne, crashed through his windshield, and the passenger side tire came through the windshield and slammed his head backward (p. 21). Rice supposedly was able to walk away from that, but went to the hospital anyway, where they sent him home in care of a friend because he had no insurance. (No matter, apparently, that hospitals are obligated to treat emergencies regardless of the person’s ability to pay.)

Even more unbelievable is that Rice walked around for six months with a traumatic brain injury. It isn’t until Chapter 5 that he describes the vertigo, headaches and dizziness that started making him think something might just be wrong. A lawyer friend got him to doctors, who diagnosed him with post-concussive syndrome.

Less believable yet is that Rice formerly was a masters-level psychotherapist who quit the field to follow his dreams in Hollywood. Surely someone trained so well in psychology would have a clue what might be happening to him. But he admits to having looked down on his patients and refused to take medication, specifically antidepressants, that might have helped him through his depressive episode that followed his firing from his menial Hollywood job due to his inability to remember the most minute of tasks. (At one point he describes not being able to remember how to copy a file onto a disk.)

Rice mentions that stress is harder on brain-damaged people but does not explain why. In Chapter 12 he says that people with brain damage are temperamental, moody, irritable and frustrated, but again doesn’t explain why that has anything to do with brain damage as opposed to, say, standard-issue bipolar disorder.

Rice eventually ends up in rehab and becomes a big proponent of “brain training,” otherwise known as “neurorehab.” He says that he was able to outperform “able-brained” people on his way to recovery but some areas responded more quickly than others.

This would have been a worthwhile book had Rice left out all the chapters about his childhood and the traumas therein, as well as the ones about Route 66, with which he is obsessed, and focused solely on his brain injury and the ways he was or wasn’t able to come back from it. Most people with traumatic brain injuries have permanent deficits in at least one or two areas; there is no 100 percent recovery. Rice glosses over those deficits, if he has them, and makes everything sound rosy: He found a girl, opened a business, everything came out wonderful in the end. It’s important to consider that skeptically.

In the meantime, for a book that blares on its cover “Every year, 1.5 million Americans become the victim of Traumatic Brain Injury. This is one man’s journey to recovery and the broken road that took him there,” it needed to focus far more on the reality of TBI and less on gearing it toward what sounds to be the inevitable screenplay.

Veteran journalist Candy Czernicki is managing editor of Psych Central. She may be reached at [email protected]