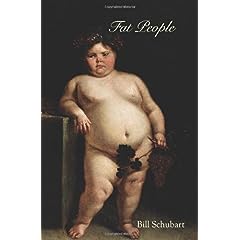 For his book Fat People, Bill Schubart has created and gathered a collection of stories that will make you rethink your relationship with food. Schubart is smart, sensitive and unnervingly keen at noticing details.  The behaviors that he draws attention to are profound and haunting.  Through fourteen stories he tracks the different ways people have come to suffer under the very thing they sought comfort from: food. While the stories are fictional, there is an aching truth in every one of them.

The foreword is the only attempt Schubart makes at directly connecting the stories to one another.  Otherwise, each section is meant to stand on its own and represents a specific hardship of food addiction or obesity.  Since each story can function individually, it is easy to carry the book with you and read a section at a time.  In the foreword Schubart writes straight from his heart and explains his own struggle with eating habits and his weight.  He is charming, compassionate and first introduces himself as “a man of girth, overweight, fat… there I said it,” setting the scene for a brutally honest series of stories.

He is able to insert humor both in the foreword and in the stories without allowing that to saturate the fact that what he’s about to unfold is deeply sad.

For the rest of the stories, though, he essentially removes himself and he resists any inclination you might expect from the author of a book like this to start giving dieting advice.  This makes the stories far more powerful, as the meanings and suffering in them are left to echo in your head.  He simply dedicates this book to “all those for whom food is a friend, an enemy, a compulsion, a joy.”

You should be warned, though, that despite how tender he is in writing, he makes no attempt to shield the reader from any of the hard-to-face truths.  Do not look to this book as a fast-track to comfort and inspiration.

Eventually, this book can lead you there, but not in the way you may expect.  Instead of high-energy motivational speeches, Schubart examines the depths of a food addiction and all the infinite ways that it can become a part of a person’s life.  He does this solely though telling stories—and rarely steps out of the story to consciously instruct you.  He leaves the lessons up to you to reflect on and draw your own conclusions from.

I respect his approach to food addiction in this book because it mimics the way the addiction functions in the world.  Unlike other addictions, it can never be completely extracted from a person’s life or body, which makes the process of fighting it infinitely harder. It also makes it harder to identify the addiction because it is a necessary part of life.  It is far easier to notice that a drug is taking over your life, since it is not readily presented to you in café windows and served to you when you visit someone’s home.

These stories are intricately intertwined with the story of a person’s life and Schubart focuses his attention there. Where other books would focus on the more regimented steps for getting help, this focuses on the stories of people who have suffered.

The stories seemed disjointed at first—not because the ultimate connection isn’t obvious, but because Schubart writes beautiful prose that makes you deeply care about the characters and it is sad to see them not reappear in later chapters.  Once I accepted this, I was able to get into the rhythm of the book and liked how different the stories were.

Some characters are presented upfront with their addiction and then Schubart takes you through the pain of living with it.  For example, one man’s story involves hiding his addiction from his wife and small child, who consistently worry about this health and try to monitor his eating habits.  Other characters’ stories begin with introductions that explain, and in many ways justifies, their resulting addictions, as Schubart leads you through histories of neglect and abuse.  One of his most compelling stories is a simple narration of the behaviors of an overweight woman he notices on a train.  His attention to her is so keen, only someone who has been in her shoes could truly capture the experience.

He tells stories in both third person and first, of men and women, single and married, younger and older, but there is one common line: their suffering.  It is clear and poignant as a step on the road to recovery because it creates a safe environment for others to begin thinking about their own story.  In addition to this, it is a deserving piece of fiction and a heartbreaking collection anyone can connect with and learn a personal lesson from.