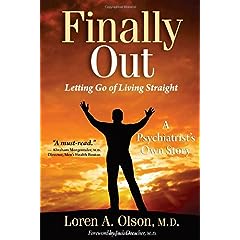 By all external indicators, Dr. Loren Olson was a success in life as a devoted husband and father who was making strides in his career as a psychiatrist.  At age 40, he was a mature and experienced individual who had made the milestones expected of him in society.  Yet, he felt he was a failure as a man.  Meeting the standards that seemed to come so easily to others had become a constant struggle.  Finally Out: Letting Go of Living Straight details Olson’s journey from the façade of the man he was expected to be to the man he had truly been all along.

Olson focuses his narrative on members of his own demographic: mature men who have sex with men (MSM).  Counselors, families and friends of gay men, and anyone interested in the psychology and sociology of both sexual orientation and aging can benefit from reading this book.

MSM is an important distinction, because many of these men don’t think of themselves as gay.  Olson cites a 2006 study in The Annals of Internal Medicine in which ten percent of working-class and immigrant men in New York City who labeled themselves as heterosexual had sex only with other men.  Furthermore, MSM come from all communities, ethnicities, and socioeconomic levels.

Coming-out stories are as varied as the individuals who tell them; those of mature men are particularly underrepresented.  Olson tells his story from the perspective of someone who had come of age during the Cold War, when homosexuals were arrested, fired from their jobs, and classified as mentally ill.  By the time he came out in midlife, he was clueless about what being gay meant.  As a older man living in a youth culture, he felt he was over the hill. “[G]ay men who have been in heterosexual marriages have much more in common with each other than they do with gay men who came out early in their lives,” he writes.

By living publicly as straight for so long, MSM are isolated from the heterosexual communities they rely on and the gay communities they avoid or about which they are completely unaware.  They cannot speak openly and honestly about their true emotional and sexual selves.  By coming out, they risk losing the only support systems they’ve known: the families, friendships, and business associations (and sometimes careers) that they’ve worked for decades to build and maintain.

They also risk losing their lives from engaging in risky behaviors or from depression and suicide engendered by their isolation.  “Traditionally, men have met their partners through family and work associates, but this is impossible in a world where sexual orientation is concealed,” Olson writes. MSM are often faced with unsafe alternatives, coupled with invisibility. They comprise the majority of people living with HIV/AIDS in the United States, but that incidence decreases as acceptance of homosexuality increases.

Finally Out is written in a loose thematic style that combines memoir, psychological research, self-help guidance, and gay history, and draws considerable power from Olson’s own story.  Olson is particularly candid when relating his own experiences, which begin with growing up in a small Midwestern town.  Each chapter is rich with autobiographical material that encompasses his family background, his sexual sensibilities and experimentation as a boy, the double life leading to the end of his first marriage, his search for what it personally meant to be gay within a larger and diverse demographic, and his relationship with and marriage to Doug Mortimer, his partner of twenty-four years.

Olson’s first, heterosexual marriage to his wife Lynn illustrates the complexities, the agonies, and — for Olson — the inevitability of coming out in midlife.  His psychological insights and self-examination add valuable layers to narratives that are unsentimental and highly personal.

Olson also includes stories from other mature men living in diverse cultures.  Underpinning Finally Out is his survey of 132 MSM (median age: 60).  For older men, the coming-out trajectory differs considerably from that for younger populations.  Developmental processes that heterosexual men (who don’t have to come out) experience in late adolescence and early adulthood are delayed in men who discover their true sexual and emotional selves later in life.

Olson examines the mechanism of dissociation and denial that many MSM experience, especially when exposed only to gay stereotypes and demonization.  High-profile personalities like Senator Larry Craig and evangelist Ted Haggard viewed themselves as “men’s men who just wanted a blow job.”  Olson adds, “I know that’s what they were thinking, because that’s what I thought, too.”

Binary thinking creates an internal split between personal and public identity.  When conditioned to equate straight with good and gay with bad, MSM experience self-hatred when the person they know they are differs from the person they think they should be.  This self-hatred then leads to a heightened search for approval, which itself becomes a form of addiction.  One never attains the “ideal self” that one is “supposed” to be.

Instead, Olson asserts, “Letting go of the need for approval allows the coming-out process to begin.”  Changing one’s “ideal self” to be closer in alignment to one’s actual self is the only way to build lasting self-esteem.  For Olson, that included getting to know other gay men whom he admired and respected, rather than basing his self-assessment on values imposed from without.  Joining a gay fathers group changed his preconceived notions about gay men and provided crucial support.

He stresses that his own thoughts and experiences define what has worked specifically for him in his journey toward self-discovery.  One vignette about dressing in drag had caught my eye, not only because it illustrates the variety in gay experience but because of the stereotype itself.  For Olson, “If doing drag was an essential requirement for being gay — as the stereotype implies — it was clear that I might not fit in there either.”  In fact, transvestism is reported to occur more frequently in heterosexual than in homosexual men. In my opinion, this misunderstanding further underscores the complexity that occurs when public and private personas diverge, including among men who are actually straight.

Latter chapters focus specifically on what it means to be an older gay man in a population that has long been underrepresented and underserved.  Olson addresses issues of caregiving and disparities in the quality of care available to homosexual versus heterosexual populations.  Only about 20 percent of LGBT (lesbian, gay, bisexual, and transgender) seniors are as likely as their heterosexual peers to access needed services, and “many elderly gay men and lesbians feel forced to re-closet themselves,” reinforcing isolation.

Olson’s frank discussions about male sexuality throughout life include topics such as masturbation, Viagra, testosterone replacement, and attitudes toward body image and performance as one deals with the natural effects of aging.  But sex is just one expression of the emotional intimacy central to relationships.  “The majority of gay men, particularly those past the age of forty, want to have a loving and committed relationship with another man,” he writes.  Older gay men face the same challenges as the larger LGBT population with respect to marriage inequality and discrepancies in other basic human rights.  To those challenges are added the prejudices against an elderly population whose members are often denied hospital visitation, participation in end-of-life decisions, Social Security survivor benefits, and equal treatment of the assets they leave to a loved one.

LGBT individuals also have less of the social support system usually supplied by family, and elders are often segregated from their younger counterparts.  Olsen advocates more outreach to gay seniors, “the most invisible demographic.”

The book’s reference section includes a broad range of materials for further study.  Olson’s back cover bio states that he blogs at www.MagneticFire.com, but neglects to mention the excellent resources that his website includes and that are nowhere listed in the book itself.  These dozens of resources include general advocacy organizations like the Gay and Lesbian Task Force and the Human Rights Campaign; advocacy organizations specific to elders, such as AARP’s PRiSM Network and SAGE; Prime Timers Worldwide, for mature gay and bisexual men; the Straight Spouse Network; and many others.  Including this resource list within the physical book in any future editions would help fill its several blank pages at the end, and could also benefit members of Olson’s audience who are not Internet-savvy.

Finally Out: Letting Go of Living Straight, a Psychiatrist’s Own Story

By Loren A. Olson, MD