Reviews Home » Find the Upside of the Down Times 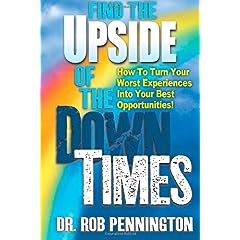 Some people have all the bad luck, and by any measure Rob Pennington, author of Find the Upside of the Down Times, has had more than his fair share. He was shot in the chest, left with a staggering hospital bill, fired from his job, audited by the Internal Revenue Service, and then cared for his wife who had a long-term, catastrophic illness. Pennington doesn’t seek pity (even though you feel the urge to give it). Rather he wants you to know that he has turned every setback into a valuable learning lesson — a step forward in becoming a better and more successful person.

Wait a minute, how can anything positive come from being shot by a stranger in the chest with a .38 caliber pistol?  Well, as Pennington points out, he was lucky. He didn’t die. The bullet missed his heart. In the ambulance to the hospital, he focused on breathing, relaxing, reassuring himself, and thinking positively.

As Pennington points out, life is inevitably sad and full of unexpected tragedies. So rather than wallowing in misery, why not look for whatever good you can find and turn misfortune into benefit?

That is the general premise of this book and one that provokes knee-jerk cynicism as it brings to mind the many trite phrases mothers harped at us for years: look for a silver lining; look at the glass as half full; make lemons out of lemonade.  Yeah, yeah, all of these truisms were pretty annoying as a kid, but as you approach the age when your mother uttered these phrases, you’re hit by the truth: Mom was right.

In this very short, quick-read book, Pennington tells eight personal stories of experiences that could have shattered his physical, financial, and mental health. Yet he never let misfortune drag him down. He not only beat his problems, but pushed past all of the hurt and disappointment to better himself.  Each of these stories ends with a sort of parable—a lesson that readers can apply to their daily lives.

Pennington strategically leaves his wife’s illness to the very end, because, as he admits, it is the hardest lesson. “I know it sounds insensitive and selfish for me to say this,” he writes. “But I have no doubt that I am a better man because of what I learned by living through the illness that took her life.” His wife, Claire, suffered from multiple sclerosis, and in light of her suffering, he came to realize that his problems were minuscule. In caring for her, Pennington learned to give freely and without expectations.

“If we can respond to others’ needs without expecting a reward in return, it is possible for us to receive a gift for our giving,” he writes. “We may find ourselves feeling an increased sense of usefulness or pride in a job well done.” It’s the Golden Rule.  As Mother might have said, Do unto others as you wish they’d do unto you. What gives this and other old homilies some relevance is that Pennington has actually lived through some fairly horrible times and recovered by using these principles.

On the other hand, it’s worth noting that Pennington was an executive coach and motivational speaker long before he wrote this book. In fact, immediately after he was shot (which occurred early in his career), he thought, this would make a great “signature story”–a story to spice up his lectures and grab the crowd’s attention.

For this reason and more, this book largely feels as if Pennington packaged his lecture notes as another point of sale in the back of the lecture hall. The bullet points, the call-out boxes, the bold-faced lessons are dead giveaways.

However, just because you know this, does it diminish Pennington’s overarching lesson? Well, I don’t think so. The author helps readers put tragedies and so-called tragedies into perspective and gives readers strategies to build a better life. “Whatever your next step might be, it doesn’t have to be earth shattering,” he writes. “It may not produce a dramatic change right away. But if you don’t take it, you will have missed new opportunities that you would not have discovered otherwise.”  Pennington’s words do seem wise—and if Mother were listening, she’d no doubt give a self-satisfied nod in agreement.

APA Reference
Hagan, D. (2016). Find the Upside of the Down Times. Psych Central. Retrieved on October 26, 2020, from https://psychcentralreviews.com/2016/find-the-upside-of-the-down-times/