Reviews Home » Disorders » Depression » Finding Happiness: One Man's Quest to Beat Depression and Anxiety and Finally Let the Sunshine In 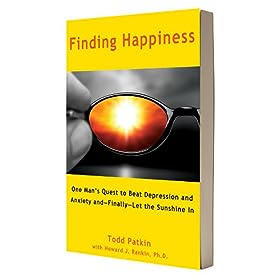 Finding Happiness: One Man's Quest to Beat Depression and Anxiety and Finally Let the Sunshine In

In Finding Happiness: One Man’s Quest to Beat Depression and Anxiety and—Finally—Let the Sunshine In, Todd Patkin takes us through his life, outlining the troubles, as well as fortunes, he has had along the way.

Throughout the book, Patkin details how he dealt with depression and anxiety throughout his entire four-decade-plus life before ultimately succumbing to the illnesses after a few minor catastrophes. In the end, Patkin is able to overcome his trials and “let the sunshine in.”

The problem with Finding Happiness is that it’s not the most engrossing read. While it’s not poorly written, there is no energy or momentum behind the prose to suck the reader in and make them truly care about Patkin and his personal journey.

Patkin has lived a privileged life. He fully appreciates that. Patkin has been quite fortunate in his career. Many people might have difficulty relating to his story. Moreover, the levels of depression and anxiety from which Patkin continuously suffered are not all that crippling until later in life. But even then, Patkin’s struggles are not depicted as some life-or-death circumstances. Yes, he contemplated suicide, and the pain he suffered cannot be minimized. However, his story just doesn’t seem to come to life on the pages of this book.

Patkin’s a smart guy, acutely aware of his circumstances. He is clearly trying not to sound unappreciative. Depression and anxiety are very real. Anyone, no matter their financial circumstances, is susceptible. To this, Patkin writes: “Money allows you to suffer in comfort, true — but that’s it. It’s important to me to make this point right here, at the beginning, so that you won’t read my story and discount it because of my success.”

Most readers will not instantly disregard Patkin’s words simply because of his wealth and circumstances. However, a very real complaint about Finding Happiness is that it is not very well executed. There is too much preliminary information, too much time is spent setting the stage. Instead of devoting hundreds of pages to the events of his life and upbringing, it would have been more effective to condense that part and focus more on his recovery and how he overcame his illnesses. The end of the book does provide some quality information, but what leads up to it is not up to par.

Toward the beginning of the first chapter, Patkin writes:

This book is the story of how and why I found myself at rock bottom, and of how, from the very depths of my depression, I was able to find true hope and then happiness for the first time. Moreover, it is my prayer that this book, as it chronicles the ups and downs of my own life, will serve as a guide and an inspiration to others who are facing daunting obstacles of their own.

Patkin’s prayer is genuine and benevolent. However, it might be difficult for someone not as successful or religious as Patkin to find Finding Happiness helpful. Patkin’s circumstances are very unique. His story, as well as the manner in which it is told, is not all that relatable. Unless a reader shares many of Patkin’s traits, it’s not likely that Finding Happiness will help them follow his path.

Patkin’s book is a sincere attempt to help others. And yet it seems more concerned with detailing its author’s life. To tell the overall story and share the intended guidance, the biography certainly must be there. The priorities, however, seem askew. As a result, Finding Happiness falls short of the book it could have been.

Finding Happiness: One Man’s Quest to Beat Depression and Anxiety and—Finally—Let the Sunshine In

Finding Happiness: One Man's Quest to Beat Depression and Anxiety and Finally Let the Sunshine In