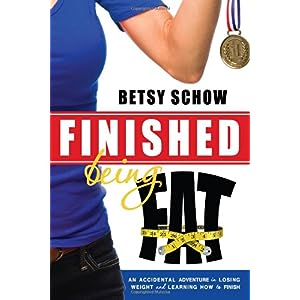 Finished Being Fat: An Accidental Adventure in Losing Weight & Learning How to Finish

That statement sums up Betsy Schow’s personal philosophy. In her recent book, Finished Being Fat, Schow not only chronicles her journey with weight loss but a personal transformation that completely changed her view of herself and her life. But hers is not a self-help book. Rather, Schow shares her personal story in an inspirational and motivational narrative.

Schow is a stay-at-home mom of two little girls. Her story begins with a “thud,” a lot of tears, and frustration. She had gained ten pounds in one month and was at her highest weight, she writes, when she decided to take control. The first step in her plan was the hCG diet. She followed it by working out at her gym and joining a group of women that she dubbed the “fat pack.”

Schow liked group classes, she says, despite that she injured herself with a free weight, writing, “I looked like a human flamingo trying to balance on my left leg with one hand holding my head, the other hand holding up my bruised heel.” For six months, she writes, she stuck with the group classes and her exercise regimen; she watched the pounds slowly slip away.

Changes began taking place in Schow’s life. She started to view herself a little differently, not just physically but emotionally as well. Her husband, Jarom, wanted to run a marathon and asked her to do it with him. Certain that this latest “project” would end soon, she agreed. As the training weeks progressed, though, Schow found that she was starting to enjoy the pursuit of this goal. She refused to quit on her training runs, even when her iPod gave out or she was confronted by a group of snarky racewalkers. Aside from finding the strength to continue, she found validation.

“Previously I had done things mainly to get accolades and acceptance,” she writes. “I needed to be told what a good job I had done. I wanted to hear that I was special. … What I was searching for was validation.” By setting goals, such as organizing the guest room, and completing them, she found that validation could come from herself.

Schow says she learned to close “back doors”: the excuses, the “escape hatches,” which she had sometimes used to quit projects or goals. She realized the strength in looking at how far you have come in your journey rather than how much further was left.

One of the greatest lessons Schow conveys is the idea of setting yourself up for success and planning as if that success is inevitable. By the end of her story, it is obvious that Schow is her biggest cheerleader.

Finished Being Fat is a testament to the amount of strength that can be found in an individual. I laughed out loud on page two; I cried as Schow finally ran the marathon. I felt myself silently cheering her on through her progress and wanting to hug her with each accomplishment. I saw myself in her at so many different points that it would take three more pages to thoroughly explain.

Schow’s writing is funny, quirky, and so honest that it is difficult to not relate to her. I may have even downloaded a marathon-training program to my phone when I finished reading her book.

To say that Schow’s book is a good read would do it a disservice. Her story is inspiring. Readers will come away with lessons, and will also find themselves laughing at the author’s wit and charm. I cheer for her still, and I’m looking forward to starting my training program.

Finished Being Fat: An Accidental Adventure in Losing Weight and Learning How to Finish

Finished Being Fat: An Accidental Adventure in Losing Weight & Learning How to Finish