Reviews Home » Fire Your Shrink & Read This Book Instead 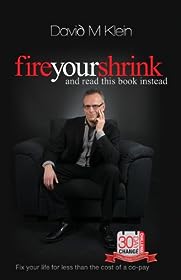 Fire Your Shrink & Read This Book Instead

Stop whining, repeating harmful behaviors, making excuses. Pick one that fits and get busy. That’s what our author would tell us.

When I began David M. Klein’s Fire Your Shrink and Read This Book Instead, my reaction was, “Boy, is he angry.” Then I began to realize that Klein is just no-nonsense about making his points and feels strongly about what he writes. I began to look forward to reading. There were many places where I knew Klein was talking about me or my behaviors, and I suspect others will feel the same way.

Klein focuses on how we think about ourselves and on overcoming our excuses for not making changes. The basic theme is that we spend too much time on analysis and not enough on action. Despite Klein’s disappointing personal experiences with therapy, and despite the eye-grabbing title, I don’t think he really is trying to put the profession out of work. In his experience, he writes, we know ourselves pretty well. And if we are honest with ourselves, we realize that we know what to do to improve our lives. Many, of course, would counter him and explain that understanding the reasons behind who we are and what we feel can help us deal with those emotions. Still, Klein would argue, we have the power to make changes on our own.

Klein makes a lot of statements about human behavior and he often hits the nail on the head. For instance, he feels that in order to accept the behavior of others we must accept the notion that we are all flawed. If we know that we have shortcomings, we must realize that others do, too, and this includes our parents, who were likely doing the best job of raising us that they could at the time. We should not blame them for what we perceive as flaws in their parenting abilities; we should try to imagine what their lives looked like back then.

And although we cannot mend the shortcomings of others, Klein writes, we can stop our own ingrained habits, even ones that began years ago. The catch is, we have to know who we are in order to alter them. He suggests that we ask people we interact with regularly to describe us—and to accept what they tell us—in order to honestly evaluate who we are.

Early in the book Klein also introduces what he calls the “three cancers”—blame, regret, and hatred. To find solutions to our bad habits, he suggests we ask ourselves three questions:

“Am I blaming someone?”

“Am I regretting something?”

“Is anger or hatred controlling my emotions?”

By discovering the answers to these questions, Klein says, we will be better able to face up to our problems. Blame, regret, and hatred, he writes, take over our brains, sap our energy, and make us depressed. Accepting responsibility for our actions is one way to move forward. “Remember, blame is the defense mechanism of the weak,” Klein tells us.

When it comes to regrets, however, Klein feels it’s okay to have them. He focuses instead on the need to accept them so that they don’t impede our progress. He also finds several ways to describe how we must get used to the fact that life is not fair and that we need to move on. It is evident that Klein doesn’t have much patience for those who know they should make changes in their lives but do not do it. Many people face bigger injustices than we do, he writes, and they find a way through them.

Hatred, the third so-called cancer, is different than anger, Klein explains. Anger is usually short-term; hatred, typically long-term. Hatred is the more serious of the two, a “condition of the heart and soul,” whereas anger is merely “in the mind.”

Late in the book the author presents his “Four Rules of Change,” which can be distilled into one phrase: “Change occurs when opportunity and misery are greater than fear.” Klein’s point is that fear stymies much of our ability to change or to try new things. But when our misery becomes so severe we can no longer stand it, then fear is not powerful enough to stop us. Likewise, when opportunities are so numerous we can no longer pass up on them, we also overcome fear.

Some of Klein’s ideas spoke to me more than others. A concept that made a lot of sense was the “truth and justice person”: It bothers me (and others) when people do not follow the rules intended for the good of society, and it bothers me that people aren’t treated fairly. A so-called truth and justice person, I want to challenge all the wrongdoers to acknowledge their selfishness. But according to Klein, I should just accept that life is not fair, and that some people don’t obey all the rules, and not let this fact eat me up. It’s certainly something I can work on.

While Klein failed to convince me that therapy has no value, I agree that there are instances when determination and self-honesty may be all we need.

Fire Your Shrink and Read This Book Instead

Fire Your Shrink & Read This Book Instead