Reviews Home » Parenting » Free to Learn: Why Unleashing the Instinct to Play Will Make Our Children Happier 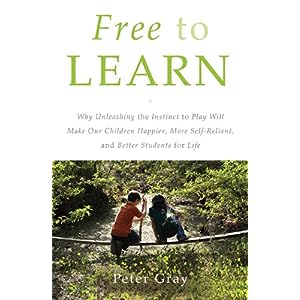 Free to Learn: Why Unleashing the Instinct to Play Will Make Our Children Happier

Peter Gray is a developmental psychologist who studies the growth of human beings over the course of their lifetimes. As his young son began to have more and more difficulty functioning in a traditional school environment, Gray began to focus more of his research on education and the environment in which it is delivered. His recent book, Free to Learn: Why Unleashing the Instinct to Play Will Make Our Children Happier, More Self-Reliant, and Better Students for Life, shakes up conventional thinking about how to best educate young people.

But while it may be easy to point fingers at problems in schools and neighborhoods, finding workable solutions is more difficult. Gray offers some useful ideas, though I didn’t get the feeling that his book, however enjoyable to read, will change our educational system any time soon.

You will likely agree with many of Gray’s observations and opinions, especially about the diminishing role that free play has in the development of youth. Gray uses the concept of a “playful state of mind” to remind us of the value of uninhibited and undirected learning. He suggests that forcing one to be creative can actually stifle creativity and that putting pressure on one to perform leads some people to rise to the task but others to fail. Being in a relaxed mood in play or learning leads to better performance and productivity, he writes.

Most of us would agree that children today do not spend as much time just playing, even when we consider computer time under that heading (and we should). Gray presents a number of logical explanations for that, such as safety concerns and busier streets, but also hits us right between the eyes by stating that it is partly the fault of well-meaning parents, too. By directing our children into program after program, sport after sport, he says, we prevent our kids from self-directing more of their activities.

This is a book about children no longer having enough opportunities to learn on their own due to fewer times to “play” or learn freely. In this case, freely means without undue adult direction, guidance, or control. The author cites the failure of today’s educational system, but also the failure of parents and our society to provide enough opportunities for our young people to learn to be independent, assertive, cooperative, and self-assured.

When Gray’s son was ten years old many years ago, he was in a traditional school and hating it. Gray discovered that the restrictions and regimentation of school were turning off his son from learning. He found a school near his home in Massachusetts that encouraged students to learn whatever they wanted to learn with few teacher interventions. There, his son flourished. This led Gray to study why this different and free environment made such a difference.

His research led him to hunter-gatherer cultures, as well as America’s history of agricultural and then industrial ages. In the book, Gray argues that young people in hunter-gatherer cultures became well-adjusted and mature because they were free to explore on their own, regularly interacted with different age groups, and grew up with little parental or adult intervention.

When American society became more agricultural, Gray points out, young people were expected to work long days under adult direction. Yet Gray neglects to acknowledge the early role that schools and parents played in trying to teach children how to read and write in order to function better in society. Yes, working long days was often a necessity for children—but although life was no doubt hard back then, kids seemed to find time to play, too.

Gray points out that during the industrial revolution children were forced due to poverty to work long days in factories, which kept them out of schools. This was one of the low points in our country’s treatment of children. As families gradually increased their incomes and child labor laws were enacted, more children began to attend schools. The author claims that earlier schools in this era were often religiously-oriented, which he translates to mean strict or bad for children. He also claims that rote and memorization as teaching methods restricted learning by limiting questioning and exploring.

That may be true, but like other arguments Gray makes based on history, it may not be quite relevant to today’s world. And as he critiques the way classes were taught, Gray sidesteps the fact that children were far better off in schools than in factories, and that perhaps the teaching methods were simply a reflection of the time period and not an attempt to make learning more difficult.

Gray points out “7 sins of forced education,” such as the “denial of liberty without due process”: that judging students fosters shame and cheating. While there is an element of truth to these so-called sins, to imply that all students are similarly affected and to place the entire blame on schools is simply overstating.

Free to Learn is not entirely a list of complaints about today’s schools and parents. Gray does acknowledge the positive impact of computers. He praises parents who, perhaps for religious reasons or frustration with schools, home-school their children.

The book closes with a chapter called “Trustful Parenting.” This may be most helpful to parents who either accept schools as they are (perhaps because they think educators know what they are doing) or feel powerless to change them. Today’s protective parenting style, Gray posits, may come from a loss of a neighborhood feeling, fear of the world due to media reporting and social media, or a desire to help one’s children succeed in the competitive society we are.

There are some good suggestions from the author, including:

The book really seems to have two objectives. The first is to show how today’s traditional schools have taken away children’s opportunities to explore freely on their own and how they’ve created undue pressure on children to learn. The second is to show how parents are increasingly protective of their children and overly directive of their activities. There is truth to both arguments, but the author seems to make everything a black-and-white issue, leaving little room for nuance.

What worked for Gray and his son years ago is a wonderful example of how a family can find a solution that’s effective for their particular conditions. But alternative schooling isn’t practical for all families for a variety of reasons. For many families and single-parent households, it may seem financially or logistically impossible to find alternatives. For others, it may not seem worth the risk.

Still, Free to Learn stimulates a parent’s thinking about what kind of learning environment helps their child learn and adjust best, and then how to simulate that environment at home or out of school if it doesn’t exist among their school options. The book may not change much on a grand scale, and the author may posit some flawed theories. But Gray has caused me to re-focus my grand-parenting activities in ways that will encourage freedom of learning and play. We may not be able to change the world, but we can help our children adapt better to it.

Free to Learn: Why Unleashing the Instinct to Play Will Make Our Children Happier, More Self-Reliant, and Better Students for Life

Free to Learn: Why Unleashing the Instinct to Play Will Make Our Children Happier

APA Reference
Schultz, D. (2016). Free to Learn: Why Unleashing the Instinct to Play Will Make Our Children Happier. Psych Central. Retrieved on February 25, 2020, from https://psychcentralreviews.com/2016/free-to-learn-why-unleashing-the-instinct-to-play-will-make-our-children-happier/