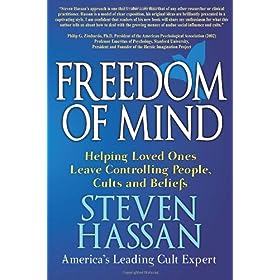 Steven Hassan, a highly respected opponent of destructive cults, has written a new book called Freedom of Mind: Helping Loved Ones Leave Controlling People, Cults, and Beliefs. Though the intended audience is a limited one — families and individuals whose loved one is trapped in a destructive cult — the wider audience could be mental health professionals and counselors who deal with such situations.

Like many books aimed at specific readers, it reads like a guidebook of what to do and how to do it. This is both its strength and its weakness. It’s written in clear fashion, spelling out actions in a step-by-step way, by a person of considerable experience and authority. But it contains manual-like colorlessness and repetition.

Nevertheless, it has the absolute ring of authority. The author was a cult member himself, recruited by the Moonies while a college student and then rising through the organization’s leadership. In addition, he provides historical background on how mind or thought control took on new interest after World War II, when there was a need to explain why so many ordinary people took part in atrocities against others.

Following the Korean War, when hundreds of American prisoners were returned from Communist captivity, it was discovered that a minority had actively collaborated with their captors, reversing allegiance and taking part in anti-American propaganda. The term “brainwashing” became part of everyday conversation and thought control or social influence became a major area of social psychology. The names of Lifton, Milgram, Festinger, and Zimbardo became known to audiences beyond academia.

Hassan also gives a brief summary of efforts to free individuals from cult control, beginning with “deprogramming” in the 1970s. This was a harsh technique that essentially involved snatching the unwilling cult member and taking him or her to a secure place where he or she was guarded and subjected to unrelenting pressure to give up cult beliefs. Frequently, this tactic backfired and the resentful cult member became more committed to the cult than ever. (Not to mention that it was, and is, illegal to kidnap an adult.) By the 1990s, deprogramming had fallen out of favor and was replaced by the more benign and less coercive “exit counseling,” which involved ex-cult members as the counselors. Hassan believes that both approaches were lacking because they didn’t involve a more complete personality change.

“In the most traditional exit counseling and deprogramming cases,” he writes, “the cult identity is submerged, but left intact. The pre-cult identity assumes control, but the cult identity is not fully absorbed and integrated into the new post-cult self.” Hassan also posits that older approaches did not involve enough of the cult member’s family.

Hassan’s own strategy is called “The Strategic Interactive Approach” (SIA) and relies heavily on concepts such as self identity, as well on phone calls, letters, and face-to-face interactions. It includes evaluating the cult member’s situation; building the SIA team; empowering team members; understanding the cult’s beliefs and tactics; interacting with dual identities; unlocking phobias; preparing for an intervention; and the intervention itself.

The approach concentrates on gathering intelligence on the cult member and the cult. How enmeshed is the cult member? How does his pre-cult identity compare with his present one? Regarding the cult, what are its structure, doctrine, degree of destructiveness, and leader’s personality?

The SIA team itself is crucial, Hassan writes, because it’s a medium for collective action. It is to include family members; close friends; and anybody else of importance to the cult member, such as a girlfriend, boyfriend, or former teacher. An important part of the team leader’s role is to educate team members about cults and disabuse them of errant beliefs.

Hassan’s chapter on empowering family members, however, is a little Pollyanish. It talks about two goals: the first is to psychologically explore the family members on the team with special attention to any issues they may have, such as self esteem, realism in self-perception, addictions, anxiety, values, and beliefs. The second is to use techniques such as cognitive behavior therapy (as well as others like self-hypnosis and prayer) to effect positive change. Although Hassan does talk about consultants from his organization, Freedom of Mind, coming in to help the team, it sounds like the goals of empowerment would require a squad of experienced clinicians.

Other instructions are also hard to enact empirically, such as those for interacting with the member’s alleged dual identities. Still, Hassan does give some good suggestions for breaking the cult member’s phobias (fears such as going to prison or going crazy that have prevented him or her from leaving).

According to the author, the culmination of these efforts to wrest the cult member from the grip of the cult — the intervention — can last three days and is proceeded by a two-day planning meeting. The intervention, he writes, should only be attempted if the mini-interactions that proceeded it have failed, and requires professional help.

Overall, Freedom of Mind is essentially a manual written by a very experienced clinician who knows the terrain and has walked the walk. It’s an excellent resource for those trying to extract loved ones from harmful cults. It also gives hope for a successful outcome to families, and the importance of this shouldn’t be minimized. Its weakness is repetitiveness, flatness, and some theorizing that might turn off professional readers. Nonetheless, I recommend it highly for its intended audience.