Reviews Home » Friction: How Radicalization Happens to Them and Us 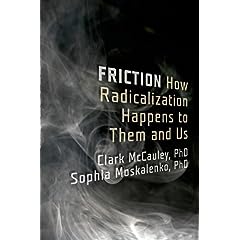 The word “terrorist” can call forth descriptors like “evil” or “crazy.”  But ordinary people can be moved toward criminal and violent acts through circumstances that become progressively more extreme.  Psychologists Clark McCauley and Sophia Moskalenko, consultants to the Department of Homeland Security, deconstruct the making of a terrorist in Friction: How Radicalization Happens to Them and Us.

McCauley and Moskalenko demonstrate twelve mechanisms of radicalization, using case histories that at times make this book read like a novel.  Their cast of characters spans more than a century and represents a mix of nationalities, social classes, and ideologies.  The authors make a compelling argument that these disparate people came to terrorism through normal psychological processes that could be experienced by anyone.

The book’s first three sections treat radicalization at levels of the individual, small groups, and the mass public.  Its fourth and final section presents an in-depth case study of Osama bin Laden and explores how the different mechanisms of radicalization work in concert among both terrorists and their victims, including governments.

Individual radicalization comprises the largest section.  Each early chapter begins by introducing the reader to a principal figure in nineteenth-century Russia, who had turned to terrorism through at least one of the mechanisms profiled.  These mechanisms are:

1. Personal grievance, in which one seeks revenge for harm done to self or to loved ones;

2. Group grievance, in which one seeks revenge for harm done to a group or cause that the individual cares about;

3. Slippery slope, in which an individual is radicalized through increasing political involvement;

4. Love, in which one becomes radicalized through attraction to someone already radicalized;

5. Risk and status, which can move individuals (especially young men) toward violence regardless of ideology; and

6. Unfreezing, in which an individual becomes open to new ideas and identity after losing long-standing social reference points.

The Russian personalities who joined the terrorist organization People’s Will — or who, like Vera Zazulich, acted alone — came from both serfdom and the nobility.  While Zazulich ultimately denounced violence, Adrian Michailov had been coerced into terrorism and later betrayed his comrades.  In contrast, People’s Will founder Andrei Zhelyabov had been galvanized toward violence following the rape of his aunt by a landowner, while Sophia Perovskaya had moved from nonviolence to terrorism through her love for Zhelyabov.

The chapters then apply social science and research to each case study.  Students of psychology will recognize Stanley Milgram’s experiments with respect to obeying authority, and the Prisoner’s Dilemma game with respect to altruism and reciprocity.  Later chapters on group dynamics include the conformity experiment of Solomon Asch, and Muzafer Sherif’s experiment in intergroup conflict.

The chapters then apply these principles to contemporary terrorists.  The same mechanisms that had driven Zhelyabov and Zazulich to terrorism drove Ayman Al-Zawahiri, founder of the Egyptian Islamic Jihad.  Just as Russian revolutionary Alexander Barannikov had fought for adventure rather than socialism, Abu-Musab al-Zarqawi parlayed his thuggery into radical acts, including violence against fellow Muslims. Like Vanechka, who had joined People’s Will in the wake of crumbling family ties and poverty, Muhammad Bouyeri was radicalized through the mechanism of unfreezing. Initially advocating tolerance, he later became the murderer of Norwegian filmmaker Theo van Gogh.

The book’s second section, on group radicalization, focuses on the mechanisms of:

7. Group polarization, in which members shift from a diversity of opinions toward an extreme view;

8. Group competition, in which cohesion among members increases when they face an external threat; and

9. Group isolation, in which the group becomes everything to members cut off from the rest of society. Loyalty to the group can overshadow loyalty to the cause it originally embraced.

The formation of People’s Will can be traced to the nonviolent organization Land and Freedom.  McCauley and Moskalenko outline the influences that transformed one into the other.  Reforms had opened Russian universities to a population previously denied higher education.  A freer press gave voice to dissent.  Pressure from the nobility placed limits on these new freedoms; land reform in particular fostered poverty.  The resulting conflicts led to government crackdowns and repression, which spawned “prison universities” and further radicalization among jailed dissidents.  Student communes borne of economic hardships and increased threats from the government furthered group cohesion, fueled by such banned books as Nikolai Chernyshevsky’s What’s To Be Done? Radical communes went underground and became further isolated from society, until only loyalty to the group remained.

As hostilities escalated, the nature of the prize shifted, from helping the serfs to controlling Russia:  “When the prize of group conflict is status and power, the conflict is a zero-sum game in which each side can only win to the extent that the other side loses.”

Similarly, the Weather Underground had emerged out of the Students for a Democratic Society in 1960s America.  Employing community organizing, petitions, and marches to achieve peaceful civil rights reforms, the SDS yielded to the Weather Underground’s mission to overthrow the U.S. military-industrial complex through violence.  “[R]evolutionaries in both czarist Russia and LBJ’s United States came to violence over a long back-and-forth of government policy, student reaction, and government response,” the authors write.  They point out that the U.S. government itself became radicalized through police violence and the FBI’s illegal COINTELPRO operations. Modern-day government radicalization includes the use of waterboarding as an interrogation technique.

Competition among radical groups can also drive extremism.  The Palestinian Front for the Liberation of Palestine initially rejected suicide attacks, but took them up when PFLP was overshadowed by the suicide attacks carried out by Hamas and Fatah.  Increased radicalization can create more support from a group’s base, but too much radicalization — as with the Weather Underground’s bombing campaigns — can repel supporters.

The third section, on mass radicalization, explores mechanisms used to mobilize large groups of people who sympathize with and support a particular cause or grievance.  Terrorists rely on this base of support for cover, information, funding, material support, and new recruits.  The mechanisms for mass mobilization include:

10. Jujitsu politics, in which terrorists provoke a government into a disproportionate or badly aimed violent response;

11. Hatred, in which the enemy is demonized as less than human and the in-group is elevated, thus rationalizing violence; and

12. Martyrdom, which relies on the perception of selflessness for the cause and uses “sunk-costs” motivation, i.e., the martyr does not die in vain.

The attacks on 9/11 had been designed to provoke the United States into entering conflicts against Muslims, thereby mobilizing Muslims against the U.S.  The U.S. in turn engaged in activities that further isolated American Muslims, in the form of profiling, surveillance, and psychological barriers of avoidance and hostility.

Martyrdom in its many forms crosses national and ideological lines and is shared by students during the Russian Revolution, soldiers immortalized in Abraham Lincoln’s Gettysburg Address, and hunger strikers such as the nonviolent Mahatma Gandhi and the violent members of the Irish Republican Army.  Today’s jihadists draw their inspiration from Sayyid Qutb, who had fought against the Egyptian government, rejected clemency, and embraced a death sentence for his beliefs in 1966.

McCauley and Moskalenko begin Friction‘s final section by showing how the mechanisms of group grievance, love, risk and status, and especially slippery slope had transformed Osama bin Laden from a shy and polite youth into a terrorist of global prominence.  They detail the roles of group polarization, group isolation, and intergroup competition in bin Laden’s development over decades.

What emerges is a picture of increasing conflict; the interplay of personal and political worlds; and the synergistic effects of radicalization across individual, group, and mass public levels.  The authors also include critical decisions that might have affected the course of history, such as the U.S. bombing of al Qaeda camps, in response to embassy bombings, that scuttled the possible extradition of bin Laden back to Saudi Arabia for treason.

In the final chapter, the authors define other roles these mechanisms can play, such as in military training, religious cults, street gangs, missionary organizations, and political activism.  The outpouring of help after the earthquake in Haiti (and, more recently, the earthquake and tsunami in Japan) demonstrate their beneficial uses.

“Focusing on the dynamics of conflict over time is essential,” they write.  They advocate for a database of government reactions to terrorism, which go beyond military and security measures and include “changes in law, court proceedings, banking, investment, insurance, taxes, communication networks, charities, social safety nets, mass media, diplomacy, and international agreements. … Political resilience will be stronger, and counterterrorism policies can be more effective, when citizens see that the same mechanisms of radicalization move both them and us.”

Written for the lay reader, with recommended reading lists after each chapter, Friction takes a well-integrated and thoughtful approach to the many drivers of unrest and upheaval.  It offers valuable insights to students of history, politics, psychology, and war.

APA Reference
Malcohn, E. (2016). Friction: How Radicalization Happens to Them and Us. Psych Central. Retrieved on May 26, 2020, from https://psychcentralreviews.com/2016/friction-how-radicalization-happens-to-them-and-us/