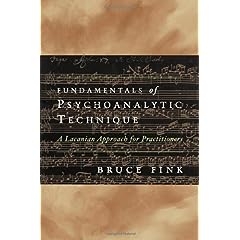 The popular TV series “Mad Men” contains several scenes depicting psychoanalysis. Betty Draper lies on the couch in her analyst’s office, the doctor seated impassively behind her. Betty reports on her mundane thoughts in great detail and rattles on about her childhood, while the dispassionate analyst listens in near-silence, offering only an occasional hmm or uh huh. Betty claims that the sessions are helpful; meanwhile, Betty’s husband, Don, becomes impatient and complains to the doctor about the slow pace of his wife’s therapy and the lack of detectable progress in her emotional state. It’s a process, explains the analyst. You’ve got to trust the process.

“Mad Men” is set in the 1960s, and I’ve imagined psychoanalysis as being a thing of this era, a mostly outdated approach that’s been replaced by more efficient therapies. Even Woody Allen gave up his psychoanalytic treatments, almost 20 years ago. But in  Fundamentals of Psychoanalytic Technique:  A Lacanian Approach for Practitioners, Bruce Fink restores psychoanalysis’s relevance and explains it in ways I dare say few of us ever understood or appreciated.

What, exactly, is the psychoanalytic process? And what might be its goal? I found some surprising and enlightening answers in Dr. Fink’s excellent book. As it turns out, not only is there an objective to analysis, but it’s the exact opposite of what I ever suspected:

…the psychoanalytic process…in its fullest expression, involves facing the fact that there are no…final explanations or ultimate answers. Although the analysand repeatedly wonders about the why and wherefore of his direction in life – about why he sided with one parent against the other, why he believed his parents wanted that certain something above all else from him, why he accepted to be humiliated by someone, why he complied with someone’s every wish, why he did things that in retrospect were very harmful to himself and seem to have blocked his progress in life – and although he comes up with myriad reasons that explain in part what seem to have been choices that he made at different crucial moments or turning points, something always remains unexplained and, indeed, unexplainable…(p. 89)

The goal of psychoanalysis, according to Dr. Fink, is to encourage the analysand through all of these explorations of childhood memories and pivotal experiences and mixed motivations and Freudian slips…not in the expectation of ever finding The Answer, but to have the analysand finally realize that there is no answer!

There is no ultimate answer or final explanation why one is a certain way or did a certain thing. There are certain constructions one can arrive at regarding one’s life direction, but in the final analysis it just is, and one must come to accept that. (p. 90)

Suddenly, psychoanalysis sounded very familiar to me; it reminded me of Piagetian Constructivism, the educational theory within which I did my doctoral work. Similarly misunderstood, misapplied and discredited, Constructivism urges educators to provide interesting problems and then mostly stand back, while the students experiment and make mistakes and try various approaches and eventually “construct” knowledge for themselves. Yes, the learning process is longer and the progress harder to predict or measure, but the resulting knowledge is something the student then owns deeply, as a part of himself.

A stubborn insistence upon finding the final answer suggests a libidinal investment in continuing to blame one’s predicament on circumstances or on other people, whereas in the vast majority of cases, circumstances and the actions of others can only explain so much, and the analysand must finally accept that he himself played a part, indeed a very important part, in the way his life unfolded. (p. 91)

(I wonder now if this is why Woody Allen stopped therapy. It’s nice to think that after decades of psychoanalysis, perhaps he finally did achieve internal peace and self-acceptance.)

Dr. Fink explains a challenging subject in clear language. This is a book to be read slowly and considered thoroughly. Every chapter contains insights worth pondering, not just about the analytic process, but about human nature itself.

The first chapter, Listening and Hearing, is priceless, dead-on and profound for Freudians-in-training as well as for the rest of us. We’re mostly terrible at listening, says Dr. Fink, and we’re especially awful when we’re trying hard to be good listeners.

…our usual way of listening is centered to a great degree on ourselves – our own similar life experiences, our own similar feelings, our own perspectives…We say things like “I know what you mean,” “Yeah,” “I hear you”…”I feel your pain”…we feel sympathy or empathy for this other who seems like us…(p. 1)

…our usual way of listening overlooks or rejects the otherness of the other. We rarely listen to what makes a story as told by another person unique, specific to that person alone…We rush to gloss over the differences and make the stories similar if not identical. (p. 2)

Fink says that in our haste to find common ground — to “empathize,” we too often wind up missing the new, different, foreign thoughts, experiences and emotions the other person is trying to express. Our efforts to connect often backfire, leaving the other person feeling unheard, misunderstood and alone.

Dr. Fink is an expert on the Lacanian perspective, though his book is written for readers with no previous knowledge of Lacan and little prior knowledge of psychoanalysis in general. As a non-practitioner who (abashedly) would place myself at the Virtually Clueless About Psychoanalysis end of the Prior Knowledge Scale, I found  Fundamentals of Psychoanalytic Technique:  A Lacanian Approach for Practitioners challenging and enlightening and extremely worthwhile. It was definitely above my head, but in a good way.

I came away with enough new knowledge about psychoanalysis to have some questions. For example, is psychoanalysis “psychology”? Or does it live in some other, adjacent realm of personal insight, in the manner of mindfulness, meditation, philosophy and spirituality? Might we all benefit from psychoanalysis, even if our “neuroses” are not debilitating?

Specific-sounding title notwithstanding, Fundamentals of Psychoanalytic Technique:  A Lacanian Approach for Practitionersdeserves to be read by a wide audience.