Reviews Home » Relationships » Sexuality » Gay, Straight, and the Reason Why: The Science of Sexual Orientation 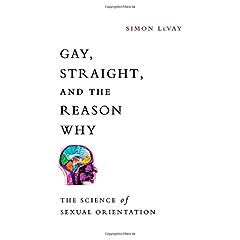 Neuroscientist Simon LeVay made headlines with his pioneering work comparing the brain structures of gay and straight men.  His 1991 article in Science led the way for numerous studies of sexual orientation as it relates to the biology of humans and nonhuman animals.  In Gay, Straight, and the Reason Why: The Science of Sexual Orientation, LeVay provides a detailed overview of where that research stands now, drawing from work conducted by neuroscientists, endocrinologists, geneticists, and cognitive psychologists.

LeVay, who is gay himself, addresses the broad range of human sexuality on two principal levels: traits found to differ according to gender, and the developmental mechanisms that potentially underlie those traits.  Chapters on gender variation in childhood and adulthood focus mainly on behavior and personality.  Chapters on the roles of sex hormones, genes, and differences in the brain and body explore the biology of sexual orientation in humans and in other species.  A chapter on “the older brother effect” examines the potential effects of birth order with respect to changes in the fetal environment.

LeVay first discusses the multiple meanings of the term “sexual orientation” and summarizes non-biological theories about homosexuality.  He presents cross-cultural evidence that goes counter to psychoanalytic and learning theories.  For example, “many (probably most) young people in our own culture develop an awareness of their sexual orientation while they are still virgins.”  In contrast, boys among the Sambia in New Guinea “are required to engage in sexual contacts with older male youths for several years before they have any access to females, yet most if not all of these boys become heterosexual men.”

Rather than ask, “What went wrong?” biological theories examine sexual variety as part of nature.  Homosexual behavior is common among nonhuman animals.  Graylag geese include male-male sexual pair bonds that can break up if females become available.  Male and female bonobos freely engage in both homosexual and heterosexual behavior.  Domesticated sheep include rams that refuse to mate with ewes, but that readily mate with other rams.

The question, “What causes homosexuality?” suggests a simplicity that doesn’t exist.  For one thing, definitions of homosexuality vary.  The expression of gender-atypical traits — feminine traits in men and masculine traits in women — also varies among individuals, in what LeVay calls “spectra of gender diversity.”  Those gender shifts account for variations within both homosexual and heterosexual populations.

In addition to sexual partner preference, gendered traits include toy preference, degrees of aggressiveness, cognitive tasks like mental object rotation, and anthropometric measurements like finger length.  They also include the size of brain structures, their degrees of connectivity, and the activities within certain brain regions.

Gender-atypical traits have also been linked to multiple developmental mechanisms, including levels of circulating sex hormones prior to birth, genetic differences, and the prenatal environment.  In addition, the interplay between those mechanisms and the timing of their appearance — not just of sex hormones, but of their receptors, and even of antigens — may steer an individual down different developmental pathways.

And one pathway may not fit all.  Different mechanisms may determine what causes an individual to be gay, lesbian, bisexual, transgendered, or heterosexual with gender-variant characteristics.  Gender-atypical traits also seem to promote reproductive success in heterosexuals; in a study of nearly 5,000 people, femininity in men and masculinity in women correlated with greater numbers of opposite-sex partners.

I found this book both fascinating and frustrating, the latter through no fault of the author.  LeVay points out that much of the research needs to be replicated.  Some studies have problems in their methodologies, such as small sample sizes or a “volunteer bias” from self-selecting subject pools.  Surveys could prove unreliable because respondents might be unwilling to acknowledge a same-sex attraction.  IQ tests with gender-weighted questions designed for heterosexual respondents might prove inappropriate for non-heterosexual respondents.

And differences between gay and straight men don’t necessarily apply when one compares lesbians and straight women.  “Most researchers who have studied the mental traits associated with sexual orientation have simply compared samples of gay and straight people, and have presented the results as averages,” LeVay writes.  “Thus, the diversity within the categories of gay and straight people tends to get ignored….It could be, for example, that gay people who are very gender-nonconformist and those who are more conventionally gendered arrive at their sexual orientations through quite different pathways, so lumping them together might muddy the picture.”

LeVay is thorough in his review of the literature, but the literature itself contains qualitative and quantitative differences that make the data subject to multiple interpretations.  As LeVay points out, “[W]ith sufficient ingenuity, any inconvenient finding can be explained away.”  For that reason, I would have liked to have seen a table, or a series of tables, weighting the different studies based on their strengths and weaknesses.

Also, as extensive as the literature is, its scope is limited.  Most of the existing biological research focuses on men.  Women are studied to a lesser degree.  Studies of bisexual and transgendered individuals are rarer still.

Controversy also exists around the tendency to “medicalize” gay people.  On the one hand, LeVay says, labeling children with a “gender identity disorder” invites stigma by assigning a medical condition to something that may have occurred naturally.  On the other hand, discrimination against people with gender-variant behavior and appearance, including the treatment of gender-variant children by adults and peers, creates psychological distress and suffering.

LeVay cites German neuroendocrinologist Günter Dörner, whose attitude toward homosexuality shifted from “a mental disorder that had a biological cause” to a cluster of traits with a “natural, nonpathological nature.”  I would add that Dr. Evelyn Hooker’s research in the 1950s found no difference between gay and straight men with respect to mental health.[1]

“[W]e need to think somewhat differently about sexual orientation in men and in women, and that cultural forces greatly influence how homosexuality is expressed in different societies and across the span of history,” LeVay writes.  “There are limits, in other words, to what we may hope to explain with biological ideas.”

He adds, “The scientific knowledge currently available does bolster the idea that gays and lesbians are distinct ‘kinds’ of people who are entitled to protection from discrimination.  But I also believe that there would be plenty of reasons why gay people should be accepted and valued by society, even if being gay were proven to be an outright choice.”  I couldn’t agree more.  As a woman who has self-identified as bisexual since the 1970s, my own sexual partnerships have focused on the individual rather than on a gender.

Gay, Straight, and the Reason Why includes a glossary and extensive bibliography.  Clinicians and researchers will appreciate LeVay’s comprehensive approach and his assessment of experimental methodologies.  Lay readers will appreciate his step-by-step guidance through the book’s more technical material.

APA Reference
Malcohn, E. (2016). Gay, Straight, and the Reason Why: The Science of Sexual Orientation. Psych Central. Retrieved on August 14, 2020, from https://psychcentralreviews.com/2016/gay-straight-and-the-reason-why-the-science-of-sexual-orientation/

How Feeling Not Good Enough Makes You Crave Validation

How to Stop Being So Controlling

"I Think My Parent Is A Sociopath:" Cluster Traits & Behaviors