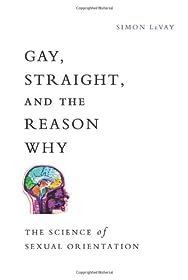 Gay, Straight & the Reason Why: The Science of Sexual Orientation

A bit over twenty years ago I was in college in California and two of my roommates were gay men. One of them mentioned a research paper had been published by a scientist at the Salk Institute. The scientist had autopsied a bunch of people and confirmed that men, on average, have a larger bunch of nerve cells in the hypothalamus, called INAH3, than women do, on average. He also discovered that this region in gay men was closer in size to the average woman’s than the average man’s.  That is, the region was “gender shifted.”

That study was done by Simon LeVay. He left the Salk Institute a year later to write and teach. And write and teach he has done, including writing Gay, Straight, and the Reason Why: The Science of Sexual Orientation.

My roommates had mixed feelings about the 1991 study, but I remembered thinking it was kind of cool. Thoughts like, “That ought to help settle down the conservative religious folk that think sexual preference is a choice.” (Sexual preference was the more-used term back then than sexual orientation.) My roommates thought the study could be used for bad, but also understood my thinking.

Throughout the years, more studies have popped up on sexual dimorphism in humans and the gender shifting of sexually dimorphic traits in homosexuals and bisexuals. Whew! What a sentence.  Let me explain sexual dimorphism here. I have pet ferrets. (I don’t live in California or Hawaii. This is totally legal.) Male ferrets are usually about three to four pounds, though I held one that weighed in at six pounds. Female ferrets are usually two to three pounds, though my favorite little girl weighed in at exactly one pound. Body size, in ferrets, is sexually dimorphic. It’s measurably different between the genders. Humans have sexually dimorphic traits too. Males, on average, are taller. Women, on average, do better on verbal tests and males do better on spatial tests. So what I meant by that long sentence at the top of this paragraph is that we’ve studied the differences between men and women, and along the way, people have noticed that gay people are often gender shifted toward the other gender.

LeVay starts out by explaining different definitions of homosexuality and a few different ways to think about it. For instance, gay men and straight women both like men, so they are androphillic. He discusses how different societies have seen homosexuals over years and cultures. He also discusses different theories people have had over time as to why some people are gay. Does being molested as a child increase your chances of being gay? Do Freud’s theories pan out? How did Native Americans deal with gay people? LeVay talks about all of that and draws the conclusion that nurture can’t explain homosexuality and that biology is needed.

The book favors the idea that hormone levels in fetuses have a large effect on those fetuses growing into children who become straight or gay or bisexual adults. Basically, female fetuses exposed to higher levels of testosterone in the womb are more likely to be gay. Male fetuses exposed to less testosterone or more androgen or both are more likely to be gay or gender shifted. But, while he spends a great deal of time talking about fetal hormones, LeVay points out that there is likely more than one way, biologically, for a person to be gay.

I think my favorite chapter was on the role of genes in sexual orientation. No one has ever found a “gay gene” or set of “gay genes.” About all that’s been found is that homosexuality tends to run in families. “In twin studies published in the early 1990s by Michael Bailey, Richard Pillard, and others, concordance rates for homosexuality in monozygotic twins (both male and female) were around 50%, whereas the concordance rates for dizygotic twins were much lower,” LeVay writes. He discusses the different theories as to why so-called “gay genes” are still around, instead of disappearing via evolution, in humans and fruit flies and all other species in which homosexuality has been observed.

I found LeVay’s writing relatively easy to understand. Those with an interest in the topic and who have a scientific bent would probably enjoy his book. You have to mentally keep track of a lot of technical-ish stuff while reading it, but he does put together a lot of studies in a way that makes sense. If you develop anxiety when reading science words and science articles, then this book, however interesting, probably isn’t for you.

Gay, Straight & the Reason Why: The Science of Sexual Orientation