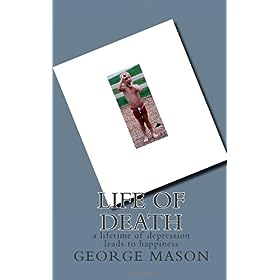 Author’s note: This review of George Mason’s autobiography, Life of Death, is not a review of Mason’s life, but rather of his book. It is difficult to critique the book without appearing critical toward the subject or his life. The book is the lone subject toward which criticism is directed.

Life of Death is not a good book. The life contained therein is indeed an interesting and fascinating one, but the way in which the life is presented to the reader is unquestionably flawed, if not downright dreadful.

Mason’s book, subtitled “a lifetime of depression leads to happiness,” is riddled with typos, grammatical mistakes, blatant misuses of words, and just overall poor writing. Life of Death clearly had no editorial phase in its development. Yet that is exactly what the book so desperately needs, as, again, the content is solid. The content is actually in fact quite riveting. But the manner in which that content is presented—the writing and overall flow (or lack thereof)—is severely substandard.

It is difficult not to dwell on these shortcomings, as their presence never lets the reader get absorbed in the book. The reader can never give himself up to Mason and let the author take him on a ride. The writing is too rigid, too shoddy. The flow is nonexistent. The mistakes are without end. Yes, the book is a matter-of-fact overview of one man’s troubled life, and yes, the book is under 35 pages, but neither of these facts should preclude the work from being enjoyable or even readable.

All that said, Mason certainly has lived an interesting life. He is a recovering alcoholic and drug addict. He spent several years in a mental institution. He was bullied as a child. He was continually under the spells of depression and anxiety. And as Mason writes, he had a “conscious desire to want to die.”

It is clear that Mason has endured tough circumstances, and the fact that he never ultimately gave up is commendable. What is so curious, however, is how Mason claims he was able to overcome his demons: God. Mason does not mention religion or God in any context until the final pages, in which he declares: “I realize I am powerless over my entire life and that following Jesus Christ provides me the solution to my problem. Believing in God is a huge decision on my part. My entire life I have been an atheist/agnostic and thought that those who believed were nuts. Now I believe that I have been mistaken.”

While disputing the existence of God or the extent to which religion benefits Mason’s life are not the goals of this review, it must be noted that their roles in the book are horrifyingly glossed over.

Religion obviously plays a substantial role in Mason’s life. Yet he only devotes a handful of sentences to it. Mason ends the book by writing, “I hope that reading this has helped you even in a small way.” But how could it? Mason simply provides a laconic overview of his life written in a detached, unaffected, almost alien manner. His inclusion of his newly found religious faith thus comes off as just another event in a life. It does not seem to provide any significance.

This is not say that it doesn’t; it certainly does, or else Mason would not have said so. But Mason never actually explains anything. He instead talks at the reader. He never takes the reader beneath the surface of his words and shows him the pain in his life. He merely states it.

Furthermore, and to the point previously made about religion, Mason never explains what religion does for him. All he has to say on the subject is, “I have given my life over to God and I realize I am powerless.” But how did he come to this realization? What affirmed it? Why was he not religious earlier in life? What were his previous experiences with religion? How does actually surrendering himself to God allow him to stay away from drugs and alcohol? If the aim is to write a book that in some way helps the reader, then there must be some semblance of an explanation. Mason, however, does not provide one.

When describing his faith, Mason writes:

Luckily for me I started believing in a higher power, God and Jesus Christ, before I knew I was an alcoholic. As a matter of interest the two times I had an acute pancreatic attack was when I was praying. This I take as a significant correlation.

Why, though? Why does Mason defend these events as matters of divine intervention instead of mere coincidence? What makes him so sure? These questions are not meant to dispute Mason’s beliefs, but rather to dig for answers. For if there are no answers, all that is left is a man admonishing his readers to believe in God without providing even the smallest shred of justification or explanation.

It’s fine to believe in God, but one typically has a reason. It would be fair to posit that Mason does, but it would have been more beneficial had he included it.

As might be suspected, Life of Death cannot be recommended. It is unsatisfactory in all areas, including what is stated as most important to the author: helping the reader. This is not an indictment of Mason or his life; it is instead an expression of disappointment in the book.