Reviews Home » Getting to Yes: Negotiating Agreement Without Giving In 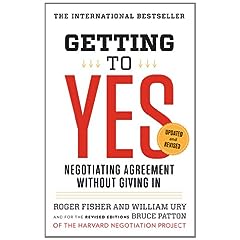 Getting to Yes: Negotiating Agreement Without Giving In

This is an updated and revised version of the first edition of Getting to Yes: Negotiating Agreement Without Giving In, published over 30 years ago. Roger Fisher is the founding chair of the Harvard Negotiation Project and William Ury and Bruce Patton are his cofounders. Fisher, Ury and Patton establish an organized approach to negotiation that is both strong and flexible in its structure. They also do their best to make this information approachable by adding numerous examples and guidance for how to navigate even the toughest negotiations.

The preface explains how negotiation has grown considerably since the book’s first publication — this growth is referred to by the authors as the “negotiation revolution.” They still, however, believe there is progress to be made in terms of conflict. To the authors, conflict is inevitable, but can be useful in life. They write, “the challenge is not to eliminate conflict, but to transform it.” The fact that we are now a global society, to them, makes negotiation more important than ever. They believe that by changing how we deal with the conflict that arises from our “increasingly crowded planet,” we will make a better place for future generations.

Getting to Yes: Negotiating Agreement Without Giving In, from its first publication, was meant to help across a variety of fields; it did and still does. A major difference in this edition is that the examples have been updated to ones more relevant to today’s readers. The original book’s brevity and clarity have been maintained; however the authors are dedicated to the foundation they established in the first edition.

The book is extremely well-structured — so much so that it seems to be more of a reference tool than a book to enjoy and read cover to cover. It begins by examining our natural instincts in negotiation, and I appreciated that I could easily identify with them.

There are two natural ways of negotiating: hard and soft. The soft negotiator avoids conflict and caves easily to demands; the hard negotiator sees negotiation as a contest of wills and often harms their relationship with the other side. This book offers a rational medium called “principled negotiation.” Principled negotiation moves away from the natural problems of negotiation — which everyone has run into — by outlining four concrete steps: separate the people from the problem; focus on interests, not positions; invent options for mutual gain; and insist on using objective criteria.

The first step is to save the relationship between the people negotiating. To the authors, this arguably is the most important aspect of negotiation; it continues to arise throughout the book. Not only does this separation between the people and the problem reduce the anxiety associated with personal attacks, but it keeps the focus on the main issue.

The second step is to focus on interests, not positions. This encourages negotiators to realize “each side’s needs, desires, concerns and fears.” It keeps negotiators on a level playing field and prevents the negotiation from becoming about a battle of wills.

The third step is invent options for mutual gain. It presents a view that is often lost in the art of negotiation: to broaden thinking, rather than to focus on one narrow goal.

The fourth step is to “insist on using objective criteria.” This, again, preserves the negotiators’ relationship by using outside information rather than personal will to decide on a resolution. The authors’ example is to look to the market value of an apartment when negotiating rent with a landlord.

After these detailed sections, the authors get to their “Yes, But” section. This section breaks from the earlier chapters’ strict foundation and formula and faces some of the everyday challenges that might arise in negotiation. They show more personality here than in the earlier chapters, with funny subtitles like “negotiation jujitsu.” They do, however, address, serious questions like “what if they are more powerful?” and “what if they use dirty tricks?” The overall approach is always one of level-headedness and trying to preserve the relationship between negotiators without overcompromising.

I would recommend this version for the updated examples, as the authors heavily rely on them to clarify their meaning. The examples are not, by any means, moments of great creativity, but are well-constructed examples by longtime educators. Everything is methodically broken down and they consistently enforce structure as well as flexibility.

Perhaps because negotiation, as the preface states, is a bigger part of life now, parts of the books seemed somewhat obvious. The authors address this in their conclusion, that “there is probably nothing in this book that you did not already know at some level of your experience,” but they wanted to try to organize this common sense into a “usable framework for thinking and acting.”

The truth is, this book is best for when you are in a tough spot. The sections are clearly labeled and can be understood without having to read the previous sections, so you can flip right to the issue you need to address in your negotiation. I am not likely to pick this up again as a fun read, but I will certainly refer to it in the future when I find myself in a negotiating bind.

Getting to Yes: Negotiating Agreement without Giving In, 3rd Edition

Getting to Yes: Negotiating Agreement Without Giving In

APA Reference
Tomasulo, D. (2016). Getting to Yes: Negotiating Agreement Without Giving In. Psych Central. Retrieved on February 22, 2020, from https://psychcentralreviews.com/2016/getting-to-yes-negotiating-agreement-without-giving-in/