Reviews Home » Girl in Need of a Tourniquet: Memoir of a Borderline Personality 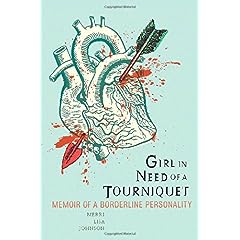 Not to use a cliché, but you can judge Merri Lisa Johnson’s Girl in Need of a Tourniquet: Memoir of a Borderline Personality by the cover quite accurately. The image of a heart that has been punctured by an arrow and the title truly set the tone for the reader. Most memoirs focusing on something health-related, whether mental or physical, are thrown into one of two categories: overly poetic with no information (typically drug memoirs) or so informative that diving into the book is nearly impossible. This book has chosen to be neither, and for that, I like it.

Girl in Need of a Tourniquet is one of the most intimate and complex portrayals of a woman living with borderline personality disorder that a reader could choose. The book is not for the person who is simply seeking bulleted information, rather it is for a person looking for an inside perspective and a new outlook. I read this book as a person who is not afflicted with the disorder, but Johnson’s writing seduced me into feeling exactly what she felt during the worst periods of her life.

Before I even reached the first chapter I encountered a quote by singer/songwriter Aimee Mann that clearly explains the title: “You look like a perfect fit, for a girl in need of a tourniquet. But can you save me….” Throughout the book Johnson shows us her world by bleeding — in the most poetic way possible — all over the book, crying out for help to both the reader and her current lover.

Johnson begins her story with someone else’s, that of Lisa “Left Eye” Lopes. Lopes was a rapper and member of the girl group TLC who died in a car accident in 2002. In a symbolic reference, Johnson says when Lopes lit her boyfriend’s (NFL star Andre Rison) shoes on fire in the bathtub and consequently burned their home down, she could feel the flames of Lopes’s mansion burning and see it from her house.

This theme of burning and being out of control continues throughout Johnson’s entire book and life. She refers to many other people in her memoir including her parents, sisters and even the infamous Alex Forrest from the movie “Fatal Attraction.” The book has the pacing of a Hollywood movie and that helps it stay fresh and exciting for the reader.

The first time Johnson talks about herself we learn that she has been married and divorced by age 20 and that her current boyfriend is physically abusing her. She therefore chooses to run away and seek a new life without him. Subsequently she meets an emotionally abusive woman with whom she realizes that she is a lesbian. This experience ultimately pushes her over the proverbial edge of her sanity and forces her to try and find out what is “wrong” with her.

Along the way we learn that Johnson is a cutter, she has a fondness for stealing lovers from other people and that she flees when situations get difficult. However, we also learn that she is very intelligent, has two sisters who she basically mothered (yet she still feels guilty for leaving them with her real mother) and that all she really wants is to love someone and be loved in return. It is impossible not to feel compassion for her.

Do not pick up this book if you are searching for light reading. It contains strong emotions, complex symbolism and a large number of words that might be in the vocabulary of a poetry aficionado. It takes Johnson about two thirds of the book to start divulging any real information on borderline personality disorder. Instead, she lets the reader try to discover on his or her own what he or she thinks borderline personality disorder is. If the title did not reveal the name of the disorder, then the average reader would not know this book was about a specific issue until the end. Instead, they would think it was a typical memoir about a troubled or “difficult” person.

This choice is overwhelmingly intentional. Johnson’s memoir is something more than an essay on a personal cathartic experience; it is an open invitation to readers to change how they think about people with borderline personality. She does not use the word “disorder.” According to Johnson, most therapists and most people in general are afraid of people diagnosed with borderline personality disorder. Even she admits to having a very negative first reaction to her diagnosis. “BORDERLINE PERSONALITY DISORDER. Shit. Those people are crazy.” (p. 137).

However, in the next paragraph she goes on to venture a guess as to why the term had such a negative connotation.

I had heard of borderline personality disorder when I worked in the university counseling office as an undergraduate English tutor. A woman walked in one day, a streak of dark hair and an open black raincoat. She asked to see one of the graduate-student counselors. No one would tell her anything. Everyone just wanted her to leave. When she left the office, the student worker staffing the front desk turned to me and said, ‘She’s a borderline. They’ll stalk you,’ That’s the start and finish of what most people know about borderline personality. (p. 138)

Near the end of the book we are offered information about the current debate in the psychology world over the name, borderline personality disorder and its destructive nature. The new name that has been proposed is “emotion regulation disorder.” In Johnson’s mind this name is a lot less threatening and would encourage therapists and people who think that they might have the disorder to be less afraid of the diagnosis.

After reading this book I have to agree with its concept. Although borderline personality disorder is serious, it seems to be a collection of unhealthy behaviors that many people exhibit at some point in their lives (such as cutting, using sex as an outlet for anger or frustration and throwing tantrums). The only difference is that people diagnosed with borderline personality disorder exhibit these behaviors more frequently and it begins to drastically affect the quality of their lives. Treatment is necessary, but most people need help from time to time. Johnson is just proposing that we help remove the stigma from the disorder’s name.

The end of the book is uplifting and suggests that there will always be bad times, but that the best thing we can do for ourselves is simply to “wait for a better season” (p. 222).

APA Reference
Fournier, G. (2016). Girl in Need of a Tourniquet: Memoir of a Borderline Personality. Psych Central. Retrieved on January 27, 2020, from https://psychcentralreviews.com/2016/girl-in-need-of-a-tourniquet-memoir-of-a-borderline-personality/