Reviews Home » Girl in the Water: A True Story of Sibling Abuse 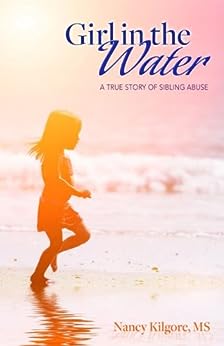 Tales of sibling rivalry are common: Marcia and Jan Brady, Cain and Abel, Ray and Robert Barone. But how often do we hear stories of sibling abuse? The darkness and fear that is encapsulated in Nancy Kilgore’s memoir Girl in the Water goes beyond what many readers can fathom. However, it is reality for Kilgore, and with her book she enters the riveting yet disturbing realm of Mommy Dearest, only with sister as torturer.

Kilgore describes her relationship with her older sister, Sherry, and the dynamics of their family. In the beginning, their interactions were sweet and innocent. But as their family expanded to include two more girls, their mother put Sherry in charge of Kilgore so that she was free to manage the babies. At first the abuse began with pinching, hitting, pulling. I couldn’t have expected how severe it would get until I read that Sherry strangled the author into unconsciousness. That she smashed a piggybank over the author’s head, then cleaned up the bloody mess herself.

Kilgore’s confusion over the nature of their relationship, and whether her sister was to be trusted or not, practically pulses off the page. She uses prose to tell most of her tale. However, she completes the web of her intricate story with original poetry. One particular poem, “I’m on Fire,” is touching and enlightening, and describes the depth of her pain. The end of the poem is particularly gripping:

To become a human atomic bomb

Of stored hatred toward her very self

And become a piece of confetti that

Each time she struck a match,

While reading I found myself gasping out loud, clenching my teeth, and shedding tears with the author. At one point, I actually double-checked to make sure that the book was in fact a memoir and not some fantastical novel. It gives voice to the struggles that apparently millions of children undergo as their siblings abuse them. And yet it is so horrific, it seems unreal.

The narration both captures the author’s childhood perspective and remains relatable to an adult audience. Kilgore does not shy away from the awfulness of what she experienced.

Now, the author has a master’s degree and specializes in PTSD. But how did she get from this horrific childhood to a successful adulthood? Did she seek therapy? And what about the family? Does she speak to Sherry anymore? Do her parents know what really took place?

It was disappointing to find none of these answers in Kilgore’s book. I had cried alongside her as she cowered beneath her sister’s torture, and I wanted to cheer for her as she climbed out of the depths of darkness. Alas, there is no chapter that allows the reader to do this. Still, Girl in the Water is an excellent, if gut-wrenching, tale of sibling abuse. I’ll add it to my growing list of recommended memoirs.