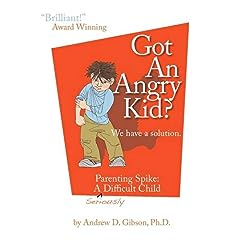 Search Barnes and Noble or Amazon for self-help books on “child discipline” and over 8,000 titles show up. Eight thousand! You can find magic 1-2-3, positive discipline, discipline without tears, how to discipline with one hand behind your back or how to discipline in your spare time. You can find out how to make star charts, behavior charts, or a naughty corner. You can learn the language of encouragement and the do’s and don’ts for setting up consequences. You can even read about how to parent different kinds of kids: the spirited, the gifted, the discouraged, the autistic, the creative, the impossible. The sheer quantity of titles speaks to a country of parents who are hungry for advice on how to do well. Not trusting their instincts (in some cases rightfully, in others not), they turn to the experts to show them a way. It’s both gratifying and concerning that so many parents aren’t willing to leave parenting to love and chance.

Andrew Gibson joins the ranks of this pantheon of experts in Got an Angry Kid? Parenting Spike: A Seriously Difficult Child. In it, he outlines the 28 step P.A.C.T. (Parenting Angry Children and Teens) program that he created in 1993 at the behest of the Connecticut State Department of Children and Families. In the preface he states that over 500 families have been through the program with a high success rate, although he presents no data other than parent testimonials to support that claim.

I do think he’s on to something. What he asks desperate parents of angry, out-of-control kids to do is to stop trying to make the kids be different and to focus on very clear, specific ways they can be different themselves. In short, he tells parents to drop their side of the tug of war and just love their kids in the faith that it will then turn out all right. That’s a very powerful intervention! When parents and their children are locked in a power struggle, when every interaction is about power, control, and authority, there’s no way out. Dr. Gibson takes a parent’s focus off what the kid should do and instead places it on what the parent can do. By asking the parents to track and keep data on themselves, he helps shift the emphasis in the family from the “bad” kid to the “diligent” parent. Not bad. Not bad at all.

Often a program such as this one works best when run by its creator. I’ve never met Dr. Gibson. I’d probably like him. His book has humor. The composite characters of “Spike,” the angry kid, and “Angelique,” his perfect sister, will ring true for many families. Gibson is well-intended and certain about the potential for success if parents complete the program. Parents who looked to him to save their families have found him helpful. I have to believe, though, that something goes on in his classes that isn’t reflected in the book because his book on its own just doesn’t cut it for me.

As a self-help manual, the book is incomplete. Chapters 7 and 8 outline 28 goals for parents to master. Take the section about goal No. 1: Shh-h-h. The goal is for the parent to stop yelling so he or she can be heard. What follows is an explanation of why yelling doesn’t work and sets the standard for the week: No more than four times where the parent speaks loud enough to be heard in the next room. The parents are asked to track their success rate. This all makes sense as far as it goes. But there are no pointers for just how a parent who has been yelling for the past, say, 13 years is to accomplish this. There is no guidance about common pitfalls and what to do about them. In my experience, a child who has been consistently yelled at will up the ante if a parent suddenly stops. What’s a parent to do then? And what if the mutual fight with the child has been the way the couple has managed to avoid fighting with each other? The book offers no cautions about such a possibility and no direction for how the couple can survive when the major distraction of their “Spike” is taken out of the way of a long-simmering marital conflict.

I suspect these and questions like them are addressed in the classes, but the book fails to fill in such blanks. The same is true for all 28 goals.

I also think that Dr. Gibson has a ways to go in the anger department if he wants to have a larger audience than the desperate and the state-mandated. There’s a thread of blame looping through his work that doesn’t serve him or his approach well. The preface includes asides about his parents — who he admits loved each other and their kids — but who he then goes on to blame for their adult children’s continued struggles with life. Although he tries (sometimes hard) to be neutral in his appraisal of parents who can’t effectively parent, there is too often an undercurrent of blame. And although he sometimes talks of temperament and outside factors as roots of anger in the “Spikes” in the world, he also at times falls into using the language of blame to describe these kids.

Although Dr. Gibson does talk about forgiveness as an important final step in letting go of anger, like everything else it’s an undeveloped idea. There are no thoughts about how to pull it off, just lectures. I don’t question his good intentions. I’m sure his self-disclosure is meant to establish some credibility. But it concerns me that he describes himself as having been a kid who could have shot up a school to demonstrate unhappiness. He doesn’t seem aware that, often in the name of humor, the “Spike” he carries around inside still is taking unnecessary potshots.

Got an Angry Kid? offers some helpful tips for parents who find themselves in a losing battle with children they love. In my opinion the book needs some serious fleshing out to give readers the information they need to stick with it when they hit the inevitable roadblocks.