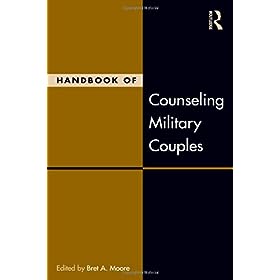 Handbook of Counseling Military Couples is a collection of essays by psychologists and therapists, edited by Bret A. Moore, Psy.D. It is intended to be read by clinicians working with military couples. The first half of the book comprises two essays on military culture followed by reviews of a number of popular couple counseling approaches, including solution-focused therapy, emotionally focused couples therapy, cognitive-behavioral therapy and Gottman method couples therapy.

The authors all write in plain, jargon-free language and provide case study vignettes of their approaches as applied to actual couples. Each author concludes with a discussion of the appropriateness of their particular modality to military couples. I came away with a clear understanding of the mechanisms and differences between the various counseling modalities, as well as a heightened sensitivity to the need for a goodness of fit between therapeutic approach and family culture. Perhaps one therapeutic approach does not fit all.

The section on solution-focused therapy (SFBT) was particularly insightful.

SFBT might be especially appropriate for military couples. In contrast to the more common “problem-focused” therapies, SFBT emphasizes that one can only really work with the here-and-now situation, and however tempting it may be to reflect back on emotional experiences prior to this moment, effective progress with the current challenges is about examining which solutions are within the person’s current grasp. (p. 54).

SFBT is highly pragmatic and down to earth, with three basic rules:

SBFT’s emphasis on solving problems and moving forward …has unique benefits in the military community because it fosters a “can do” attitude that fits well with the other forms of training military personnel received. It establishes the couple as a functioning unit in which teamwork and solutions enhance the quality and satisfaction of the relationship…the process of learning an active coping model that can be applied to many challenges unique to military families… (p. 67)

The second half of the book takes a closer look at the major issues military often face, including post-traumatic stress disorder, infidelity, depression and substance misuse. Each of these chapters is interesting, thorough and informative.

Handbook of Counseling Military Couples answers the need for therapists who work with military clients to understand the particulars of the challenges these couples face. But any reader with an interest in relationships might benefit from this glimpse into a unique culture and its particular set of values and perspectives. Handbook of Counseling Military Couples challenged my perspective, opened my mind and broadened my thinking.

There was a time in my life when I lived in the South and I dated a military man, a decorated Special Operations soldier, a guy with tons of what I still consider “the right stuff.” Joe was super-smart, responsible, kind, scrupulously honest, family-oriented, conscientious, and, like me, more focused on doing valuable work than on making tons of money.

The relationship itself, however, was stupefyingly difficult, for reasons I finally understand, having read Handbook of Counseling Military Couples. This is one of those books written for a niche audience that I wish might reach a larger readership. It is clear and readable, and it contains insights that any person interested in relationships, including one’s own, might benefit from.

I was especially miffed by Joe’s insistence on volunteering for duty on every single holiday: Thanksgiving, Christmas, New Year’s Eve, Valentine’s Day. I’d rant about how undervalued I felt, how hurtful it was to never be his top priority. Joe would stare at me blankly and say little, though sometimes he’d shake his worn-out head and ask “Are we having the same conversation?” It was an apt question; our discussions had a Tower of Babel quality to them despite our both speaking English. For years we struggled gamely on, trying to understand each other, before finally giving up. Ever since, our odd disconnect has been an unsolved mystery I’ve carried around in the back of my mind.

More than a decade later, back in the Northeast, reading Handbook of Counseling for Military Couples, I found this almost immediately (page 9):

…we use Army Special Operations as an example…these units develop their own cultural norms, not the least of which is pride in being willing to volunteer more times than the average service member.

Aha! In Joe’s world, volunteering to work on every holiday is a way of demonstrating responsibility and commitment. Joe wasn’t avoiding relationship commitment, or reenacting some deep childhood attachment trauma; he was being a good soldier, and he couldn’t fathom why I had a problem with that. In fact, he couldn’t even understand my questions. Meanwhile, I was viewing his behavior through my own particular “relationship-first” lens, as if no other “right” or “healthy” lens existed.

“Culture” is the collection of behaviors and beliefs characteristic of a particular group, and during my time with Joe I was unwittingly bumping up against military culture. Moore’s book is quick to stress that the various branches of the military each also have their own subcultures, that Army culture differs from, say, Air Force culture. With this in mind, the seven “Army Values” provide a good summary of military values in general and the culture they undergird. They form the acronym LDRSHIP: loyalty, duty, respect, selfless service, honor, integrity, and personal courage.

While those are all good things, they put family and relationship responsibilities second to those of the Army. Handbook of Counseling Military Couples helped me understand why it didn’t work with Joe. It will surely help other couples, too, as well as it will clinicians.

Edited by Bret A. Moore