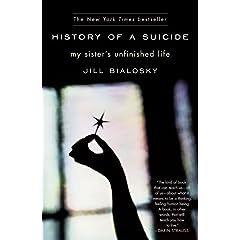 History of a Suicide: My Sister's Unfinished Life

On the night of April 15, 1990, Jill Bialosky’s 21-year-old sister Kim came home from a bar in downtown Cleveland to the house where she still lived with her mother. She’d had a fight with her boyfriend. Her mother, a chronic insomniac, was upstairs watching television. Kim took her mother’s car keys and went into the garage where her mother’s car was parked. She closed the garage door, got in the car, turned on the ignition and fell asleep inside. She was discovered the next morning by the neighborhood boy who mowed the lawn. The cause of death was asphyxiation.

In her profound and intimate book, History of a Suicide: My Sister’s Unfinished Life, writer and poet Jill Bialosky pieces together the details of her sister’s suicide, and explores the impact suicide has on the family members that are left behind. In age when suicide is still taboo, I appreciate such a candid memoir of a family grieving and trying to understand the depth of pain that would lead a person to kill herself.

Before it happened to Kim, the horror of suicide—that a person could take her life because of searing emotional pain— had seemed, while devastating and tragic, more of an abstract concept. Though I had known a few people who had committed suicide, one a childhood friend, over time I had pushed those losses into my unconscious. For years, even after Kim died, my defenses were formidable. If I were truly to have understood her state of mind then, I would have had to feel her pain unencumbered by the layers of protection I shielded myself with like thick sweaters against the cold. Every time I tried to grasp it I was overcome. It was as if I lived behind a blackened door.…

To understand suicide is to try to comprehend the ungraspable phantom of life: the power of the darkness, fear, and weakness within the human mind, a force as mysterious, turbulent, complex, and uncontrollable as the sea, a force so powerful it may not be capable of withstanding its own destructive power.

I think suicide can either make you into a fierce advocate for mental health. That’s obviously true for Jill Bialosky and her family. Or it can make you slip away in darkness and try not to think about the kind of inner dialogue that takes place before a person takes her life.

For me, it was the suicide of my aunt and Godmother when I was 16 that became the fuel behind my mission of blogging and writing about bipolar disorder, depression, and all mood disorders. With the duel diagnosis of schizophrenia and bipolar living in the 80s, my aunt Mary Lou didn’t benefit from all the research and support that I do.

Some of that is changing.

Studies today are beginning to identify those at high risk for attempting suicide. The Johns Hopkins-led study, published in Biological Psychiatry, found evidence that a genetic tendency toward suicide is linked to a particular area of the genome (our total genetic content) on chromosome 2.

Stigma has a far way to go, and studies are still in their infancy. But I do believe we’re at a better place than we were when Kim, Jill’s sister, fell asleep in the garage and my aunt did the same.

History of a Suicide: My Sister's Unfinished Life

Therese J. Borchard is Associate Editor at Psych Central, where she regularly contributes to World of Psychology. She also writes the daily blog, Beyond Blue, on Beliefnet.com. Therese is the author of Beyond Blue: Surviving Depression & Anxiety and Making the Most of Bad Genes and The Pocket Therapist. Subscribe to her RSS feed on Psych Central or Beliefnet. Visit her website or follow her on Twitter @thereseborchard.