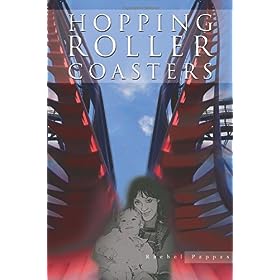 Hopping Roller Coasters: A Tale of Forgiveness and Healing

So many times we think we know where we’re headed; then we’re taking an unexpected turn.

Rachel Pappas’s memoir, Hopping Roller Coasters, details the unpredictable story of a mother and daughter who must cope with their mood disorders, until they can reach a place of mutual understanding that gives way to a stronger relationship with each other. Though I found the content to be emotionally painful at times, I think it’s an insightful read. Pappas provides us with an important takeaway message that revolves around genuine forgiveness and a path for healing.

Rachel’s story highlights her trials with bipolar disorder and how it affected her daughter, Marina. She transports the reader into their private moments, showcasing intimate arguments, where Rachel took out her frustrations on Marina in a raw and angry fashion. She didn’t mean the sentiments that came forth during the heat of an altercation, but biting words circulated between them. Rachel’s therapist ultimately put her on medication to regulate her mood swings.

We then read how Marina went through a period of hard knocks during early childhood and into adolescence; she had trouble focusing at school (she was diagnosed with auditory deficits), and she inherited her mother’s bipolar disorder as well. In desperate need of help, Marina endured a period of hospitalization and even moved away to live with her grandparents, hoping for a finer environment.

During Marina’s stay at her grandparents’, at 13 years old, she was hospitalized for getting hold of her grandfather’s painkillers. After a stretch of time, Rachel received a phone call from her mom, relaying the news that they couldn’t keep their granddaughter with them any longer. As difficult as it was to hear, she knew her daughter needed something more.

Marina also unfortunately struggled with cutting as a way to deal with her emotional turmoil. One of the more heartbreaking lines I read was when Marina explained why she did what she did. “It hurts on the inside, so I figured I might as well hurt on the outside,” she told her mother.

Fast forward a few years later: Marina was 16, and she and Rachel were at it again. Hurtful remarks and threats flooded their fights. “Where was my little girl? The one with the pixie cut who let me hold her hand crossing the street?” Rachel wrote. “My good-natured ‘pipster’ who accepted my excessive hugs and kisses into early puberty. I was losing her. No, I had lost her.”

What really struck a chord (even though I’m only in my 20s) was looking at this situation from the mother’s perspective. I could only imagine a parent’s sense of loss, among other things, when you’re watching your child transition away from childhood and into young adulthood. Now throw in that kind of strife, and it takes that particular awareness to a different level.

After another hospitalization at 18 years old, Marina went back on her medication and was finding her stride with a new job. She also began her first serious romantic relationship (which was definitely enjoyable to read about), and facets of her life were beginning to fall into place after a rocky decade.

In the final chapters, Rachel faced additional obstacles, but through it all, she found a new outlook regarding her relationship with Marina; she realized she didn’t want any friction in the connections that she valued.

By some twist of fate, Rachel’s personal challenges mended her history with her daughter and paved the road for forgiveness in both directions. They both knew that they unintentionally caused the other pain in the past, but they were able to move forward, become unstuck and salvage what really mattered. For that, I recommend this narrative.

Hopping Roller Coasters: A Tale of Forgiveness and Healing