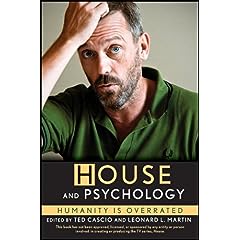 When I was a psychology major, part of our lab work involved observing people through a one-way mirror.  In House and Psychology: Humanity is Overrated, edited by Drs. Ted Cascio and Leonard Martin, the one-way mirror is your TV screen.  Your experimental subjects are the fictional characters of the hit series House, M.D.

The editors position House and Psychology as a supplemental text for psychology courses in high schools and colleges.  Producer David Shore’s creation becomes a vehicle for teaching the basics of the discipline’s research and principles.  The book relies heavily, though not exclusively, on the tenets of social psychology in particular, with forays into abnormal and personality psychology and, to a lesser degree, neuroscience and the psychology of learning.

Its writing style is informal and sometimes hip, but don’t let that fool you.  Citations from peer-reviewed journals and classic experiments team up with liberal quotations from the House canon and deconstructions of its characters’ behavior, especially that of Gregory House, M.D.  The result mixes solid research with entertaining fiction.  I was already a House fan before reading this book, but I’d venture to say that readers unfamiliar with the series would also enjoy these essays, the same way they would enjoy a collection of juicy case studies.

The book’s 30 contributors — “The PhDs of Princeton-Plainsboro” — range from psychology students to postdocs and professors.  Their expertise includes but is not limited to research in the psychology of authenticity, cognition, creativity, humor, intergroup relations, moral reasoning and judgment, power plays, and self-esteem, as well as addictions, the neurobiology of mental illness, and psychophysiology.  Specialties also include parasocial attachments to television characters and psychiatry in film.

House and Psychology‘s four sections (The Good, The Bad, The Ugly, and The Awe-Inspiring) lead the reader through a rich landscape of human interactions and the motivations behind them.  Chapter 1 addresses helping behaviors.  Psychological theories such as the negative state relief hypothesis (helping so that one doesn’t feel guilty about not helping) and Dan Batson’s experiments on altruism are presented against the backdrop of actions by characters like Taub and Cameron.  The evidence presented tests House’s assertion that every act stems from self-interest (egoistic reductionism).

Is House an authentic person despite his penchant for lying?  Evidence in Chapter 2 indicates that authenticity is multidimensional, and that House excels in some factors but not all.  The personality theories of Abraham Maslow and Carl Rogers are among those brought to bear on the doctor and his diagnostic team.

As a viewer of the show might expect, House ranks high on creativity, but why?  Chapter 3 delves into theories surrounding payoff vs. risk and a high vs. low need for closure.  Experiments like the Duncker candle problem illustrate the difference between “functional fixedness” and its opposite: finding an unconventional use for a common object.  Divergent thinking (making connections between disparate objects) and the role of the subconscious in processing memories round out the chapter.

House does much more poorly in his relationships, but his entire staff experiences problems there.  Chapter 4 examines different relationship styles, such as Cameron’s “destiny belief” in one true romantic partner, contrasted with Chase’s belief that people can grow into a relationship.  House’s childhood likely contributed to his “anxious-ambivalent” relationship style, marked by controlling behaviors and jealousy.  The different character interactions are matched to theories of attraction and relationship maintenance strategies, such as Robert Sternberg’s theory of love and its components of passion, intimacy, and commitment.  Chapter 4 closes by addressing issues of trust, conflict, and the dissolution of relationships.

Despite their relationship problems, House’s team members exhibit signs that they are generally happy, which in turn contributes to their diagnostic success.  Foreman tolerates House’s abuses because of the rewards his work provides.  Chapter 5 discusses the components of achieving happiness and the myths associated with it.  House’s assertion that miserable people make better doctors goes against established evidence.  Flow — being absorbed in the moment, as when House is fully engaged with a medical puzzle — also contributes to happiness.

Chapter 6 examines social support and the importance of reciprocity.  Cameron and Wilson both give more support than they receive, while House receives more support than he gives.  Foreman and Thirteen’s relationship had been reciprocally supportive.

The chapter also addresses the different types of social support (tangible, informational, and emotional) and the best times to apply each.  The wrong type of support can exacerbate stress and negatively affect a person’s self-esteem.  At times, simply knowing that support is available can suffice.  The lack of robust social networks outside Princeton-Plainsboro Teaching Hospital presents a problem for the entire team.

Conversely, humor helps House’s staff members, both individually and within their group.  Chapter 7 offers physiological and neurological evidence of humor’s health benefits.  It reviews the different styles of humor, such as the aggressive and (less often) self-defeating style that House employs.  The chapter examines the roles that upbringing and the environment play in determining someone’s joking style.

Is Gregory House a true clinical case of narcissistic personality disorder?  Chapter 8 scores him on that spectrum, comparing and contrasting him with people like Tiger Woods.  Unlike most individuals with the disorder, House not only talks a good game, he delivers.  He falls into the “great man with great flaws” personality type, making him an antihero.  His positive qualities make others want to minimize his shortcomings, a phenomenon called “cognitive consistency.”

Does everybody lie, as House asserts?  Chapter 9 describes a 147-participant study suggesting that everybody does, but in different ways.  Even sympathetic characters like Wilson and Cameron lie.  House’s lies are manipulative, but so too are his brutal truths.  He differs from the average person who fears getting caught in a falsehood, but who also lies for fear of offending another.  The chapter examines the motives behind various forms of misleading, from hiding a secret to easing social interactions and, in House’s case, hiding emotional pain.

The neurological underpinnings of House’s Vicodin dependence set the stage for Chapter 10.  The chapter discusses concepts such as neuroeconomics and the Iowa Gambling Task.  In this task, normal subjects differed from drug addicts (and from people experiencing a particular type of brain damage), who risked larger losses in favor of immediate rewards.  Increased tolerance, i.e., neuroadaptation, seen in drug addicts parallels brain damage in the prefrontal cortex, which governs higher cognitive functions and inhibits impulsive behavior.

Foreman’s prefrontal cortex aids his restraint when he chooses paperwork over alcohol after his patient dies in the episode “House Training.”  In contrast, the amygdala, involved in human emotion and immediate reward to stimuli, drives Thirteen’s drug use in “Lucky Thirteen.”  Cameron’s one-time crystal meth use in “Hunting” does not make her an addict, while Chase’s drinking in “Brave Heart,” following his role in the death of African dictator Dibala, resembles alcohol use by sufferers of post-traumatic stress disorder.  Chase uses alcohol as self-medication to numb his emotions.  House’s inability to cope with his emotions contributes to his Vicodin dependence.  His lack of “self-regulation” represents part of the complexity of drug addiction.

Chapter 11, on conformity, argues that House performs a valuable service by encouraging dissension within his team.  The chapter cites experiments such as that by Solomon Asch, in which the need to conform led subjects to give answers they knew were wrong.  House’s divisive tactics help guard against groupthink, but his nonconformity contributes to his own isolation even when he is morally right.  Stanley Schachter’s experiment comparing reactions to conformists vs. deviates illustrates the cost of being the odd person out.

Chapter 12 plots several series regulars and a recurring character on the Interpersonal Circumplex, whose four quadrants measure high to low ranges of two dimensions: agency and communion.  Agentic values (e.g., achievement, intelligence, competence, and power) co-vary with communal ones (e.g., harmony, nurturance, and loyalty).  The chapter details the ways in which different personality types play off of and change each other’s behavior.

House’s high agency/low communal score is a fitting lead-in to the power dynamics discussed in Chapter 13.  What confers power on a person?  (In this hospital series, it’s knowledge.)  How does having power change one’s behavior, and what differentiates powerful people from others?  The chapter examines the power struggles between House and Cuddy and discusses issues of risk-taking, self-confidence, goal setting, and empathy or the lack thereof.

Chapter 14 focuses more on House’s patients.  It explores the relationship between our brains and our thoughts, feelings, and behavior by providing background on several neurological disorders.  Among them are synesthesia, in which input from the different senses overlaps (Greta in “The Right Stuff”); akinetopsia, the inability to see moving objects (Kyle in “Son of a Coma Guy”); and aphasia, the inability to process language correctly (Fletcher in “Failure to Communicate”).  In “Euphoria,” series regular Foreman experiences blindsight, a condition in which he is unaware that he can’t see.

Chapter 15 classifies House and his diagnostic team among the “Big Five” dimensions of personality: openness, conscientiousness, extraversion, agreeableness, and neuroticism.  Generally stable over time and across situations, personality is connected with numerous aspects of our daily lives.  For example, House’s and Foreman’s liking of complex music genres relates to their openness, i.e., intellect.

The “Big Five” carry through into Chapter 16, which connects personality with political leanings.  The series House, M.D. is liked by almost equal numbers of liberals and conservatives.  House’s nonconformity and high tolerance for ambiguity and uncertainty relate more to a liberal mindset.  His tough-mindedness and dogmatism are more conservative attributes.  Ignorance on both ends of the political spectrum invites his disdain.

The finale, Chapter 17, argues that rather than being an antihero, Gregory House represents the classic hero of myth.  His development as a character parallels the hero’s journey as put forth by Joseph Campbell.  His infarcted leg wrests him out of an ordinary but uneasy existence.  Both his diagnostic team and his patients serve as guides as he progresses through life’s trials.  His Vicodin-fueled halluciations bring him to an abyss that forces him to transform.  “Huddy” — his relationship with Lisa Cuddy — represents the reconciliation of the changed hero with his old environment.  Central to the myth is the realization that the hero’s struggles parallel our own.

The brutal candor and self-reflection exhibited by House, M.D.‘s characters make them engaging case studies.  Numerous quotes from the show’s scripts illustrate each chapter’s subject matter, supplemented by references from the scientific literature.  Readers interested in psychology or developing fictional characters can learn from this book, which also offers an entertaining and insightful twist to the series for fans of the show.

The best screenwriting advice ever

CPTSD, PTSD, OCD and Trauma: How Creating Boundaries Will Set You Free