Reviews Home » How Do You Grab a Naked Lady? 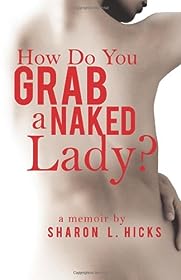 Before they fell out of vogue, roughly 40,000 lobotomies took place in the United States. “Took place” being a rather passive, arm’s-length way of saying that, on 40,000 separate occasions, a person with an advanced medical degree decided to slice another person’s brain. Often, against their will, and sometimes, with an ice pick through the eye socket. Always carefully, I’m sure.

Sharon Hicks’s mother was not one of those who received a sharp metal instrument to her prefrontal lobe. But due to her mental illness, her instability and unreliability, her penchant for racing around the mall naked and screaming profanities while high-school-aged Hicks looked on — not to mention the more damaging abusive behavior that the professionals never found out — she was considered an “excellent candidate” for lobotomy. Her husband, the author’s father, “didn’t understand how an ice pick to her brain would bring back the woman he loved,” Hicks tells us, and so declined the doctor’s offer, opting instead for that other go-to treatment of the mid-20th century: shock therapy.

In this self-published memoir, How Do You Grab a Naked Lady?, Hicks neither fully lambastes the doctors and psychologists who once attempted to “fix” her troubled mother, Carolyn, nor salutes their trusty care. The book reveals the slippery, subjective nature of both mental illness diagnosis (is she ill, dangerous, or just having fun?) and treatment (how do we ethically treat those we deem mentally ill, with their permission as much as possible, and without doing further harm?). Hicks focuses as well on how a parent’s mental instability can irrevocably dent a child’s sense of confidence, family, and self. Paragraphs at times scream out for an editor, but the book nonetheless offers a thought-provoking story about psychological health, family dynamics, and changes in medical practices over the past half-century.

Hicks recounts story upon story of just how wild her mother Carolyn was, how at times violent, how deceitful, how neglectful of her children. She also recalls the terrible way that mental health practitioners ruined her mother’s brain and personality. Was Hicks’s mother really mentally ill, she asks, and if so, what could doctors have done that was different than treating her harmfully, against her will?

While lobotomy and shock treatment aren’t administered with such zeal as they were in Hicks’s mother’s time, doctors do continue to alter patients’ brains to deal with psychological issues today. It’s easy to exaggerate the violence of lobotomies, especially due to the way they were often forced on patients against their will, but the use of brain surgery to ameliorate mental health problems should be noted. Deep brain stimulation, for instance, means cutting into a person’s head, placing an electric stimulation device, and using an external control to send regulated zaps to their brain matter.

Much, much more is required to prove that someone needs it than was required for mid-century lobotomies. And unlike with Hicks’s mother, deep brain stimulation can’t be done without a patient’s consent. Still, it’s important to give some context to mid-century psychological procedures. As dangerous and sans-consent as they often were, one could argue that they weren’t as out-there as we think.

As for diagnosis, there’s also a lot of murkiness left today. Hicks gives us several devastating psych ward scenes that make us question the medical establishment, but also the frank acknowledgement that her mother’s “ill” behavior and “real” personality were simply too tangled to parse. She wonders about the difference between a person whose harmful behavior is malicious — is her mother’s abuse, which comes in both sexual, verbal, and emotional forms, on purpose? — and one whose actions are just an accident of synapse.

When Carolyn locks her children out of the house for hours, screams at them, runs down the street nude, attempts to seduce a doctor in front of her own husband, sexually molests her daughter, and generally neglects herself and her kids, Hicks never quite knows what the cause might be. Doctors who promise to solve the puzzle always fail to do so. And so, very often, the author impeaches herself.

Readers with unstable or abusive parents will recognize that constant theme in the memoir: self blame. When Hicks’s mother Carolyn “pressed her hips and breasts” into a man during a party, in front of her family, then screamed and cursed at her husband, Hicks’s young mind goes to a familiar place. “I grabbed my gut to relieve the tightness,” she writes. “Maybe I hadn’t cleaned the house and dishes to her satisfaction; maybe I shouldn’t have talked with her that afternoon. Maybe I set her off. I folded my hands into Dad’s and squeezed an apology.”

Like many children who grow up in abusive or unstable homes, that “if only I had done X” feeling, that visceral worry that the chaos or violence is all one’s fault — that one could have, should have, prevented it — creeps in often. Hicks has a hard time in childhood and adolescence primarily due to her mother’s behavior, then secondarily due to the way she chastises herself and renders herself “invisible” in order to “solve” her mother’s problems. Years later, when Hicks has married, for the second time, a man who turns out to be violent, her thoughts echo that day at the party with her mother:

“I did as he said, or there would be trouble. It was important for me to keep the peace for my children. So I tap danced trying to make it all perfect, believing that if I had the house in perfect order, our lives in perfect order, then maybe he wouldn’t get mad and would therefore treat the kids and me kindly.”

Of course, the way that Hicks does or does not behave has no real effect on the terror that her mother, her first husband, or her second husband heave at her. She tries to control the unstable person by being an even “better” person herself, and eventually learns that she cannot.

And yet, Hicks bravely shows us how the abused can sometimes mimic the abuser. Although she writes about wanting to show everyone who’s met her mother, be they neighbors, doctors, lawyers, community members that she, Sharon Hicks, is nothing like her “crazy” parent Carolyn, she also admits to a cycle-of-violence moment. Toward the beginning of the book, Hicks writes that one day, when she was still a girl herself, she babysat an infant cousin.

“Keiki was my favorite,” she writes. “I watched her like a hawk to make sure she didn’t fall into the pool, hoisted her onto my lap, and brushed her hair.”

And then, in the next sentence, without warning: “In the bathroom, I took her diaper off and and spanked her until her okole (bottom) was bright red, until she sobbed and sucked in great, hiccuping breaths. The slap felt good against my hand. I felt powerful.”

Finally, after physically harming the child on purpose, Hicks comes to the “rescue” and soothes the little girl, immediately holding her until she stopped crying and telling that “everything was going to be okay.”

As a memoirist, Hicks could have easily left out the incident, continuing to portray herself as a model child who was the victim, never the violent one. But with this one brutal paragraph, she conveys a lot to us about how parents rub off on children and how patterns of violence emerge. Luckily, there don’t seem to be any other moments in which Hicks deliberately hurts another person. That one memory, however, is powerful enough.

Much of the book continues to grapple with Hicks’s disgust with, yet unrequited love for, her failure of a mother, as well as her own string of abusive relationships and periods of depression and helplessness. Unfortunately, throughout the sometimes-gripping, sometimes-reflective narrative is a barrage of clichés and a cringe-worthy repetition of phrases. Some paragraphs are elegantly crafted, while others need help.

There are other repeated clichés as well. The repetition of them doesn’t make the book any less insightful about mental illness and family dysfunction, but it does leave one distracted and slightly suspicious, or at the very least annoyed. How could that many people in Hicks’s memory have looked exactly the same, and why does she keep using the same hackneyed terms?

Overall, however, the memoir works. Hicks grows emotionally and reflects often on her own behavior in relation to her mother’s. But perhaps more rewarding than her story of a traumatic childhood and eventual self-acceptance is the way that she gets at the trouble with “troubled” individuals: our collective burden of moving past consent-less harmful treatments — and how the definition of ill, when it comes to psychology, is still up for debate.