Reviews Home » Relationships » Sexuality » How to Think More About Sex 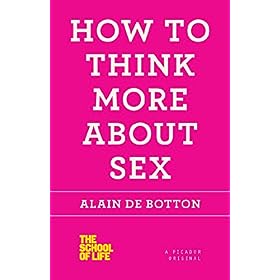 Titles like “How to Think More About Sex” have to be targets for wisecracks.

Written by Alain de Botton, this, however, is intended to be a serious book about a very serious subject. The emphasis is on how strange and troublesome many of us find this intensely pleasurable experience. All of us secretly fear that we deviate from some healthy sexual norm — one that doesn’t really exist.

I hadn’t heard of de Botton before. Looking him up, I found that he is a Swiss-born British writer and television personality who is very popular in the U.K. He could be described as a popularizer of philosophy, and his previous titles — including How Proust Can Change Your Life, Status Anxiety, The Architecture of Happiness, and Religion for Atheists — give some idea of what he is about.

He is the founder of the rather grandiloquently named organization called “The School of Life,” which is described as “…exploring good ideas for everyday life.” How to Think More About Sex, though at times thought provoking, fails to provide much new information and often falls flat in its declarations about what should be an interesting subject.

A chapter called “Can ‘Sexiness’ Be Profound?” raises a very vague question and doesn’t answer it in any clear fashion. The author simply provides some old findings from evolutionary biology that healthy appearace is valued as a plus for a potential sex partner, and that beauty is “in essence someone whose face is symmetrical (that is, the right and left sides match precisely) and whose features are balanced, proportionate and undistorted.” Nothing earth-shattering here.

One chapter on beauty, titled “Natalie and Scarlett,” poses the actresses Natalie Portman and Scarlett Johannson as two equally attractive examples of evolutionary beauty in their symmetry of face and balance of feature and wonders how we would choose one over the other. The author’s answer, taken from the work of German art historian Wilhelm Worringer, is that we favor what we feel is missing in ourselves. “The specifics of what we find ‘beautiful’ and what we find ‘sexy,’” he writes, “are indicative of what we most deeply crave in order to rebalance ourselves.”

Perhaps the most provocative part of the book is a section titled “The Problems of Sex.” The section’s initial chapter, “Love and Sex,” deals with the sometimes antipodal goals of love and lust through a fictional encounter between two strangers, whom the author calls Tomas and Jen. The two characters meet and harbor conflicting desires: Tomas sees Jen as a love object, somebody he can marry and with whom he can have children, while Jen, defying gender stereotypes, has no interest in Tomas as a longterm partner, but just wants to ravish him. For the couple to get together, both have to hide their real interest in the other through dissimulation. De Botton feels that neither need is more moral than the other.

The following chapter makes the rather unoriginal point that sexual rejection attacks the core of the rejected party’s being and is frequently seen as a moral judgment rather than a mere accident. This, we know.

“Lack of Desire” is in many ways the most original and perceptive chapter in the book as well as the most successfully analytical. Regarding the falling off of sex during marriage, de Botton posits that the work of William H. Masters and Virginia E. Johnson—a well-known pair of sexuality researchers—has skewed our thinking about the subject. Masters and Johnson promoted the understanding that people have the right to sexual fulfillment in longterm relationships and that failure in this area is pathology. Rather than pathological, de Botton believes that diminishing frequency of sex over the years may be simply a normal part of aging.

This chapter also deals with impotence, and here de Botton’s perspective is unique in the extreme. The author feels that impotence is, “at base, then, a symptom of respect, a fear of causing displeasure through imposition of our own desires or the inability to satisfy our partner’s needs.” He sees it as “enduring kindness.” What he concludes, however, is even more unusual.

“The fear of being disgusting, absurd or a disappointment to someone else is a first sign of morality,” he writes. “Impotence is an achievement of the ethical imagination—so much so that in the future, we men might learn to act out episodes of the condition as a way of signalling our depth of spirit, just as today we furtively swallow Viagra tablets in the bathroom to prove the extent of our manliness.”

Reading this last bit, all I could think was wow.

As for pornography, there is not much equivocation here. The author clearly loathes it, calls it “poison,” and condemns it as a prodigious waste of time and money. He cautiously advocates censorship, and a couple of his reasons for condemning it approach the bizarre. For example, he feels that suffering is not a bad thing and that porn is harmful because it reduces suffering. In his own words, “Pornography, like alcohol and drugs, undermines our ability to endure certain kinds of suffering which we have to experience if we are to direct our lives properly. More specifically, it reduces our capacity to tolerate our ambiguous moods of free floating worry and boredom.”

Apparently—and amusingly—the author may not know that the shy but lustful female librarian is one of the clichés of pornography. The example above suggests that his knowledge of the subject is limited.

Moreover, while it is true that contemporary pornography is frequently misogynistic, brutal, and dark, there are also numerous examples of people giving each other gentle, loving pleasure. I have little doubt that such pornography likely provides release for many people who for one reason or another can’t have physical relationships with their peers.

Finally, de Botton’s chapter on adultery is murky, but the author comes out in favor of a faithful marriage over an unfaithful one. In his conclusion, he makes the bold statement—sarcasm alert—that sex invigorates our life.

It’s hard to know what to make of this book. The author read some materials, including the famous works of Masters and Johnson, saw a few films, and did a lot of thinking.

He didn’t, however, do a lot of reading of contemporary sex research. His original insights seem few and paltry. Readers looking for a fresh, original approach to an endlessly written about topic aren’t going to find much new here.