Reviews Home » How To Think Straight About Psychology 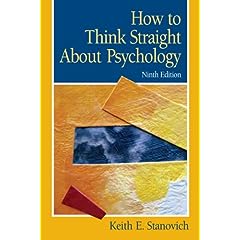 How To Think Straight About Psychology

Keith Stanovich’s book How To Think Straight about Psychology is frequently used as a standalone text or a supplement in introductory psychology, critical thinking, statistics courses and courses in research methodology. In its ninth edition, it has been adopted by over 300 post-secondary schools.

The title is slightly misleading, as the book is about much more than psychology. It could have been just as easily titled How To Think Straight about Science or How To Think Straight. If you have any interest in science, statistics, psychology, cognition, research methods or decision-making, this book has something for you.

The author, Keith E. Stanovich, is professor of human development and applied psychology at the University of Toronto. He is the author of six books and over 200 scientific articles.

Stanovich’s 1986 article on Matthew Effects in reading has been cited over 1,100 times, and he has authored 22 other articles that have received over 100 citations. In a citation survey of the period 1982-1992, he was designated the most cited reading disability researcher in the world (Nicolson, R. I. Developmental dyslexia: Past, present and future. Dyslexia, 1996, 2, 190-207).

In order to find unity in the field of psychology it is important to consider the methods used to advance psychological knowledge. The connections of topics are not important. What is important is the use of the scientific method, which is employed by scientific psychologists.

“[T]he first and most important step that anyone must take in understanding psychology is to realize that its defining feature is that it is the data-based scientific study of behavior” (p.7). Stanovich points out that it is common to hear people outside of the field of psychology say psychology is not a science. This issue is addressed at length.

Stanovich explains what science is and how it works. There are three interrelated features that define science:

Stanovich explains these features in detail.

Chapter 4, Testimonials and Case Study Evidence, explains why testimonials and case studies should not be used as confirming evidence, although they often play a role in forming testable hypotheses. Case studies are useful in generating ideas, but are virtually useless at the later stages of scientific inquiry.

Case studies are not useful at the later stages of scientific investigation because they cannot be used as confirming or disconfirming evidence in the test of a particular theory. The reason is the case studies and testimonials are isolated events that lack the comparative information necessary to rule out alternative explanations…The problem of relying on testimonial evidence is that if testimonials accumulate to support virtually every therapy tried, then it is impossible to use them to support and specific remedy. All the competing remedies also have supporting testimonials (p. 55).

Correlation does not imply causation but it is a prerequisite for causation. Stanovich explains the common problem of confusing correlation and causation. He also mentions complex correlational statistics – multiple regression, partial correlation, and path analysis. “These statistics allow the correlation between two variables to be recalculated after the influence of other variables is removed, ‘or factored out’ or ‘partialed out” (p.77).

Different research designs are discussed at length. One of the key points made when discussing experimental research is the importance of control groups. When determining the effectiveness of a treatment it is crucial that we compare the observed effects in the control groups with those in the experimental groups.

Many people have difficulty thinking in terms of probabilities. Common problems of probabilistic thinking includes overreliance on vivid testimonial evidence, failure to take into account the fact that larger samples give more accurate estimates of population values, and the tendency to see relationships among events that are really independent. In order to fully comprehend psychology it is imperative to have adequate knowledge in the area of probabilistic thinking. In order to be a contemporary psychologist it is important to understand statistics and probability.

In the final chapter of the book Stanovich explains why psychology has a bad image in the eyes of many people. In short, this image problem can be attributed to psychology’s association with Freud, and association with parapsychology, the self-help literature, and confusion about the type of knowledge that most psychological investigations seek.

What I have mentioned about the book in this review is a very small part of what it contains. It is written in an easy to follow format and is useful for the lay public, students and college professors.

If you have any interest in science, statistics, psychology, cognition, research methods, decision-making, and thinking more clearly about everyday situations do yourself a favor and pick up this book.

How To Think Straight About Psychology

Jamie Hale, MS., is a researcher specializing in eating behavior, cognitive science (various aspects) and scientific reasoning. Jamie has written seven books and co-authored one. He is a member of the World Martial Arts Hall of Fame (recognition of my strength and conditioning work with martial artists), college instructor, learning / memory consultant and board member of Kentucky Council Against Health Fraud. Visit Jamie's site at www.knowledgesummit.net.